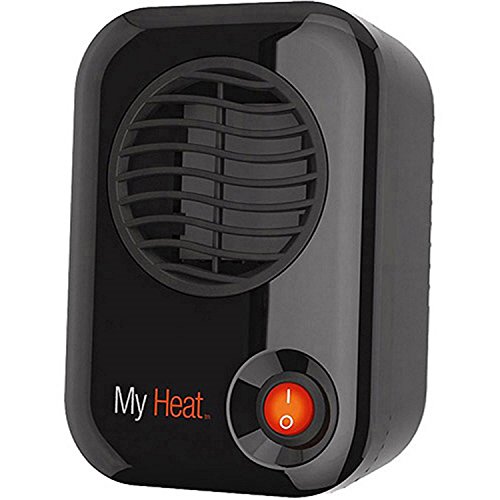 This product was mentioned in 36 comments, with an average of 1.33 upvotes

I've used this for the past few years: [link]

It's small, it's quiet, it's perfect.

I also keep a light vest draped around my chair for when it gets a little too chilly. The vest keeps me warm while my hands are free to blaze through dem sheets, namsayin?

I saw the heating pads and was thinking about going that route until I ran across people mentioning this heater. [link] I like the fact that it has the fan built in, but is it safe would be my question. I can't imagine it being any less safe than a light bulb in a paint can.

I use one of these, for the same reasons. One nice thing you didn't mention is that these also have auto shutoffs if temps get too high, so you won't have thermal runaway and destroy your fermentation chamber in case of a temp controller failure like somebody using a lighbulb-in-a-paint-can setup posted a couple days ago.

I have the same heater! For those that may not know, this heater is really really weak unless you're almost touching it. I doubt that it'll damage those shoes.

I use a 200W space heater. Works quite well, and helps circulate the air in the fermentation chamber. I've been taping my temp probe to the outside of my carboy, with some bubble wrap on the outside (duct tape -> bubble wrap -> temp probe -> carboy).

You really think a tiny CPU heatsink on a 15w heating element is going to heat my room better than a small boiling water system? That's amazing because boiling water and steam gets SO HOT, right? I thought if I could somehow make a boiling water tank, well insulated, it would do a better job, no?

Any other heating cost-effective ideas here for simplicity / effectiveness of heating a small room? Thank you, you rock. I intuitively feel like a giant ass pipe with steam in it is going to do a much better job still... I have one of those 200w heating elements with a fan on it, it doesn't do a dent to the room temp. [link]

Same here. I tried to get by with one of the seed warmer mats, but it just couldn't keep up. With the little 200W Lasko heater and an STC-1000 (technically a BlackBox, because I was lazy and didn't feel like building it myself) I'm able to quickly change temps in my 5.0cuft freezer as needed. Last fermentation I went from 64F to 70F down to 33F without problems.

Should clarify, definitely putting a heater in there. I've got a Lasko heater in my ferm chamber now. Not too reliable. Isn't heating after being at 50F for lagering. Turns on but no heat. Maybe a reptile heater next time.

I use this space heater. Comes completely with it's own fan to help move the air around to keep temps consistent.

Not sure what kind of ceramic heater youhave bee using, but if it holds heat after it is switched off, it will over heat your ambient temperature measured by the probe at least. There is way more thermal mass in your fermentor, so it takes much more to increase the temp, so the residual heat has less impact. Anyway, just a guess based on an assumption.

I had not heard of these. The chest freezer in my garage is about to be put to good use again.

EDIT: Actually, I might just drop $15 for zero effort, added safety, and a fan with this tiny space heater.

It's small, has a relatively low electric draw, and doesn't get "set things on fire" hot unless you leave it on for a long time. It definitely won't heat a large room much (12' ceilings ... forget about it) but I've found I can heat rooms to much lower temps than I'd normally be comfortable in and use it as the ultimate spot heater.

When I'm sitting at my desk I put my feet on an old pillow, drape a blanket or comforter over me, and turn this heater on underneath the cover. It's awesome. I don't feel like I'm going to burn myself or ignite anything just by touching it. I don't even need to keep it on 100% of the time.

Despite obvious recommendations not to, I have even carefully placed it underneath the covers in my bed - not while sleeping, but just in at the start of the night to take the edge off the cold so my body heat could begin to be useful.

I'm sure that'd do it. If you've got a temperature controlled fermentation chamber, I know a fair number of people use this little guy for keeping theirs warm in the winter. It's at least a fairly mild investment.

Holmes has a little space heater that is 200 Watts. I found that placing 5 or 6 of them around the room felt better than having one 1500 Watt heater. Maybe it's because the heat comes from all around instead of one place. I used less electricity, too.

I'm sorry to hear about your fuzznoodle. :-(

My wife has severe restless legs and uses microwaveable bean bags as the foot of our bed to help combat that.

Each night I heat three of them up, one at a time, in the microwave for 10 total minutes of run time. The difficulty is that I'm doing this right before bed, and I'm often half asleep, and have been known to fall asleep on the couch while waiting or accidentally burn one of them. It also adds up to 60+ hours a year, bleh.

What I'd like to do is create a box my wife can deposit the bean bags in in the morning, and then pull out whenever she's ready for bed.

My initial idea was to use an insulated 'Igloo' cooler, a ceramic heater, a temperature controller, and an electrical outlet timer to build something that would turn on in the early evening, heat up the bean bags, hold them at temp, turn off in the early morning to avoid wasting electricity.

My background in DIY Homebrew fermentation chamber construction is saying buy this ceramic heater, and use an STC-1000 temp controller.

If the temp probe is wrapped in one of the beanbags it should reflect temps just fine, but I've also thought of adding a permanent beanbag to the box to keep the probe in.

I use this one in a 7 cu. ft. chest freezer: https://www.amazon.com/gp/product/B003XDTWN2. Some people don't like the idea of a fan based heater, but this one is low wattage and has a built in safety switch, has worked great for me for a couple of years now.

Okay I’ll try that. And with the heater did you mean something like this?

I use this one:

It has been working great for a few years now.

[link] 2 years and going strong. I have 2 16 cubic foot chest freezers and I have one in each. Has no issue holding temps even when it's freezing in my uninsulated garage.

or an electric blanket.

I'm using a Chest Freezer and this small space heater based on it's safety features.

What about this as a suggestion? [link]

go with this 200w heater

and a temp outlet thermometer like this [link] so the heater comes on when your room dips below a certain temperature.. and so it turns off at the right temp as well.

Price went up or my memory went bad. Either way: [link]

Many brewers recommend this one. [link]

I just use a mini space heater and temperature controller:

I literally just ordered this one from Amazon last week, and it's doing a great job keeping temp. If it's good enough for Wisconsin, it can handle Phoenix.

I put one of these near my keyboard, it helps quite a bit

If you're not using a water bath to control the temperature then you have to heat with something like FermWrap or Brew Belt, or these little space heaters

Peruse craigslist for a minifridge without a freezer rack (or one with, or that you can bend) and that will accommodate your size of carboy. Slap a DIY or prefab STC-1000, or Johnson on there with a small ceramic heater, and you'll be on your way to brewing anything properly.

It really makes a world of difference.

First recipe will be a Pale. I'll post details and updates. Just finishing a new larger fermentation chamber. I threw this into a 7cf chest freezer.

For the heat source I am trying this.

I have the brew bucket and just use a small cheap desk heater in my fermentation chamber hooked to my inkbird, works great