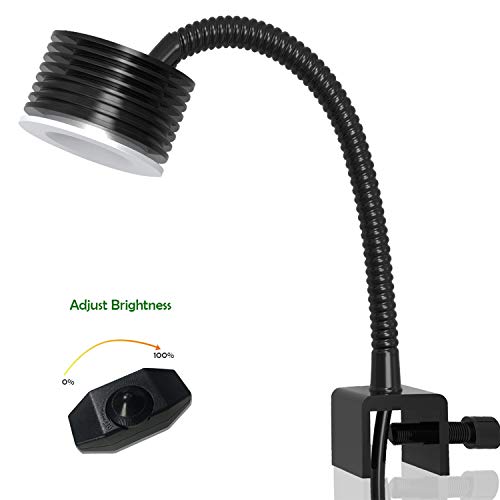 This product was mentioned in 27 comments, with an average of 3.41 upvotes

It’s a nice little light. I have one on each of my nano tanks.

Here is the link for those in the USA.

I’ve had this light for almost two years now and after revisiting this link, I just noticed they used my photos in their product description so that’s mildly interesting.

I believe that is actually an Asta but nevertheless I'm curious about it as well. About to start a new 22 long and am debating a Stingray vs x2 of these. I like the look of these clip-ons better but I trust Stingrays and already have one on my other tank.

That is just about perfect, thanks!

Think this one would be overkill for a hardscape tank? I like the idea of point lighting but if it's too bright the stingray seems like a better option. [link]

This light has lasted me 3 years now. It makes plants and fish look great, grows plants like a dream, has a dimmer, and is the perfect shape for a cube tank. Like I have been tempted to buy cube tanks before exclusively because I own this light.

It also comes with two lenses, one makes the light a slightly more concentrated beam, kind of a “spotlight” if you want some fun dynamic lighting, and the other distributes the light evenly over everything beneath it.

Other than this light, I have had good results with the finnex stingray lights. I’m not sure what you mean by lights that don’t need CO2, no light requires CO2. If you’re worried about the light being too much and causing algae problems, that’s easily remedied with a light timer to limit the number of hours a day that it’s on, and/or adjusting the temperature and fertilizer situation in your tank, depending on what issues you’re having. I highly recommend a light timer no matter what level of tech your tank is at, a regular schedule of 14 hr days with 2 hr “naps” in the middle (together with dropping my tank temperature to 73 farenheight) completely turned around my algae problems. Good luck!

I’m the same way about lights that show off my tanks, and I’ve had great results with this light. But if your tank is a standard dimension 10 gallon, you would probably want two of them

Other than this light, I’ve never had much luck with aquarium lights from Amazon. I’ve heard good things about hygger (never had one myself though), nicrew (same, never tried it, but heard good things). You could try a twinstar, but those are some of the priciest out there, and they’re made to particular tank dimensions, so you may have to hang it from a mount instead of standing it on the rims of the tank.

However, knowing that you like the finnex light colors is invaluable. That is impossible to tell about a light from an online listing, you’ll only know when you put it on the tank. I would seriously consider just getting a second finnex of the same model and putting them both on the tank (this will only work if the issue is overall brightness, not penetration. If the problem is that the light isn’t reaching the bottom of the tank, definitely replace the light). But if you do this, definitely have the light on a timer and be sure not to have it on too many hours a day or you’ll drown in algae. Hope this helps!

Since it seems like this is getting quite a bit of attention i will do a full breakdown.

The tank is a WaterBox 6 gallon which i saw at a big box store for around $40The driftwood is spiderwood also from the big box store it was $20The soil was the leftovers from a bag of Fluval Stratum $18 (Probably used about half of that)The grass is Sagitaria Subulata, the LFS said it was dwarf sag, but i am not so sure. Took these out of my 20 gallonThe plant halfway up the driftwood is Bucephlandra, not sure which variant, it was from the lfs as wellThe top plant which is emergent i am not so sure on i am thinking it is some type of sword but it was from a big box store last year and i have totally forgotten what it is.The light fixture is a Lominie LED Aquarium Light, $40 https://www.amazon.com/gp/product/B07236CXBQ/ref=ppx_yo_dt_b_asin_title_o01_s00?ie=UTF8&amp;psc=1

EDIT: oh and the stones are petrafied wood from a craft store.

The lights are available on Amazon, but I don't sell them.

It looks like it's under a different name now but it's the Asta 20 from Amazon. Kessil knockoff? Maybe. But good light for cheap.

So I'm using a pressurized CO2 setup with an inline reactor.

Substrate is a combination of Fluval Stratum and Tropica Aquasoil.

Stock is 12 CPDs and a bunch of shrimp. Dose 3x a week of Niloc Thrive+.

Setup is also fairly new: only about 2 months.

Here's a link if interested. Thanks for the advice! [link]

[link] This light may work if you plan on a low light setup, most of the reviews are running this light on smaller tanks

It is the larger version of this light which use to be available on Amazon.

[link] The dimmer kind of sucks but other than that it works well!

Or an AI Prime if you want lots of light at the bottom.

[link] I just got it, it's really bright and has a dimmer.

Here is the light and aquarium:

Had to leave my apartment for a moment, but here's the link to the amazon page: link

I took a chance on this light when it was released a few months back to replace a Finnex Planted+. No regrets, it's become my favorite nano light.

I wouldn't recommend the Beamswork light for the 5 gallon. It's not going to look right on that small of a planted tank both size wise and in color temperature.