What is reddit's opinion of Leviton T5635-W USB Dual Type-C with Power Delivery (PD) In-Wall Charger with 15 Amp, 125 Volt Tamper-Resistant Outlet, White?
From 3.5 billion comments
As an Amazon Associate I earn from qualifying purchases. The following content includes affiliate links for which I may make a small commission at no extra cost to you should you make a purchase. 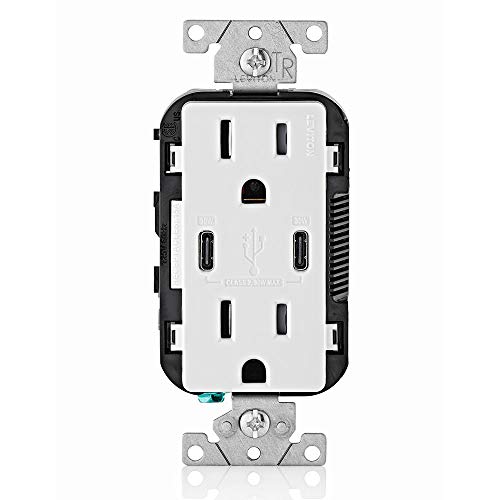 This product was mentioned in 28 comments, with an average of 2.64 upvotes

Get this to replace your outlet and problem solved. Just put one of these outlets in to power one of my Minis. They do 30W and the Mini only needs 20W so you’re golden.

The amazon reviews seem to indicate that it is capable of supplying 9v, so it looks like this should work. One review even explicitly said it powers the mini! There is a review that says the power halves if two devices are plugged in, so it probably won't work with another device plugged in.

Leviton makes a dual USB-C outlet that will provide 30W but that 30W is split among the two ports, so as long as only one device is plugged in it will be charging at 30W. $45 from Amazon.

I don't want to use a power brick, dongle or adapter. I want the outlet I put behind for my mounted tv in the recessed to be enough watts to power my CCWGTV and the USB c hub I have for it.

I found this one but it's 30 Watts if you only use one of the ports but it splits it between them if you use both.

I think it's only 30 watts of output if your device is compatible with power delivery.

Swap out the receptacle for one with USB-C ports.

Leviton dual USB-C Type outlet with Power Delivery don’t get the one with type-A and type-C because it doesn’t have PD (It will not supply 9V at 2.22 amps or 20 watts). You also can’t use the other USB-C port because the power in the other port will drop and your HomePod mini will not work. Other than that, it works well.

Ah, not sure about the UK, I'm in the US. But I imagine there are European equivalents.

This is the only brand I've found in the US that actually matches or is better than a brick, everything else is slower. [link]

Leviton sells some with PD, but they're capped at 30W. Still way better than USB-A and sufficient for phones/tablets, but you're not going to be able to drive a workstation laptop off of it.

People really need to get more comfortable with replacing the electrical outlets in their home.

I’m down to clown. Since I have had my pro max I hardly ever plug it in. When I do it’s in my 30w Leviton outlet for a quick charge. [link]

Only reason I don’t have a MagSafe puck on that outlet is I just have not gotten around to getting one.

I do 0 data transfer via wires.

This one works, but only the left port delivers the correct power needed for some reason:

The point is that the outlet can service 2x additional devices even when both plugs are being utilized. Most convenient in kitchen or besides the bed.

Eliminate the wall-wart for an even smoother look

Nifty, but would be cooler if it also had PD USB-C ports.

Something like this: https://www.amazon.com/Leviton-T5635-W-Delivery-Charger-Tamper-Resistant/dp/B07PTWG5DV/ (but also with HomeKit of course)

The one that I trust is a few years old, and only goes up to 30W shared between two ports (although it does allow 30W to a single port).

The problem is that the volume of the wall outlet box limits the size of the power adapter that you can integrate into one of these things...

Ditto what everyone says about getting an electrician/home inspectors. Yes for the wiring.

I've automated both an 1875 victorian and a 1960's ranch of my MIL recently, if you nave any questions message me.

You should use Lutron Caseta switches. You'll need their base, but you do NOT need a neutral going everywhere. They are amazingly simple to install, three screws and you're done. If you're doing a 3 way you simply tie together the other outlet to complete the circuit and use their Pico remote.

If you're doing a whole house, you might want to contact Lutron and see if you can buy in a contractor bulk .

There are new AC outlets with PD quick charging USB-C and USB 3.x outlets built in. I like them a LOT as they reduce the clutter of transformers in the busy charging areas. However, your electrical boxes will need to be big enough to accommodate the depth of the ac outlets. They're about 2x as thick as a standard AC outlet so the electrician might have to put in a deeper box.

Here's one that I've installed. There's a ton of them though

Make sure if you're going to use dimmers that the bulbs and the fixtures can handle dimming. Last thing you want is messing up the voltage to a device that's not dimmable.

Doorbell, make sure you have a 24V transformer. If the doorbell was installed a long time ago, the owner probably did some shortcuts to get it working that won't support modern wifi-based doorbells. Get the electrician to re-wire the doorbell with a straight run to the transformer.

I've given up on chime boxes, and just use HomePods as the doorbell chime.

Everyone here is saying Ethernet, and that's cool and all, but realistically there's a decreasing need for that. Good idea to put them at distant ends of your house if you've got a large house, or you have walls that are lathe/plaster or chicken wire mesh. But Thread based devices are repeaters (get a bunch of the A19 Nanoleaf bulbs) and mesh systems are increasingly good with Wifi6. It's always a great idea to run Cat 6a (I think it's 6a) to do the fastest speeds. IOW, Cat 5, which is pretty standard, is no longer fast enough for the highest speed devices, which means that at a certain point a wifi 6 router properly configured will have faster bandwidth than a Cat 5 wired house. I can't remember if Cat 7 is good for current speeds, lots of sites say that.

You'll want to make a separate 2.4 and 5G network, if possible, just make a dedicated 2.4Ghz channel for your HomeKit devices, and use a separate name for them. Most of the wifi devices don't work if your phone is connected to 5Ghz when you're trying to configure. Meeross stuff even has a problem if the router is set to do both 2.4Ghz and 5Ghz over the same name.

Eve makes incredibly reliable devices, and they're increasingly compatible with Thread. Door sensor are really pretty key for automations like turning on basement lights when you've opened the basement door, etc. Motion sensors are great for rooms where you have no entry door but want lights when you enter, also recommend eve. And I recommend eve for outlet-based control as well.

If you have a garage door, the Meross garage door opener is wonderful. But if it's a detached garage, you'll need a really solid repeater out to it, or ethernet to the garage to make sure it works, the antenna is not the best.

I’ve just been placing these around my house. I’m tired of having power bricks on every other socket in my house.

Let me Google that for you

The ones I've been getting will do 6A total on the USB-C ports:

There are plenty. The one below will go up to 15 volts.

I would just install one of these. It will look much cleaner. Unless you need more than 30 watts of power.

I have replaced a eww outlets in the house. Some are intelligent, other are like this: [link]

If changing the outlets are not your thing, outside of a new adapter as others pointed out, a new power bar/strip is also an option: [link]

I'm ordering for family but I'm out of the US (homedepot is geoblocked) - is this the correct one on Amazon?

Schweet! I bought this same shelf (along with this outlet: https://www.amazon.com/gp/product/B07PTWG5DV ) Now I’m just waiting for my Mini to be delivered by Apple. It’s great to see yours in place and how nice it looks...kinda like a preview of what mine will look like.

Well a quick search shows me that a usb c outlet can clearly have PD.

You did not give much detail in your description. You provided a picture but did not specify what was wrong or right about it. The baby description was not helpful.

If what you want is an wall outlet with 2 USB type C outlets, say so. If not, be more descriptive of exactly what you want.

I'm not trying to hijack your thread, but I am working on something similar except I have 2 outdoor IQ's with USB-c that I am trying to work with. I was looking at this outlet which says it will do 15 watts per usb c. Amazon Link

They have ones with 1 usbc port and 1 usba which seems like what you are talking about (I'm not speaking about the distance because I don't know the answer, just the connections).

This page says that each camera is 7-9 watts and the outlet says 15 watts per port.

I don't have an answer for you, but I can add that an electrician could run an additional outlet or two to where you need to be for very cheap (its romex and another outlet). Running 110 for 25-40 feet and then the cords that come with the cameras shouldn't be a problem with the right outlet.

Does anyone have any thoughts on the outlets above and the power consumption of the cameras?