What is reddit's opinion of March 1945 - Duel at the Cathedral?
From 3.5 billion comments
As an Amazon Associate I earn from qualifying purchases. The following content includes affiliate links for which I may make a small commission at no extra cost to you should you make a purchase. 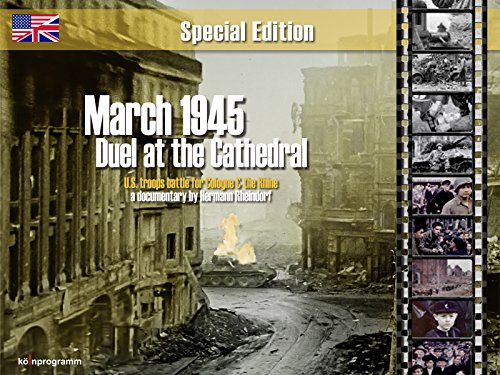 This product was mentioned in 4 comments, with an average of 2.75 upvotes

If you have Amazon Prime Video, there is a very good documentary called <em>March 1945: Duel At The Cathedral</em>. Interviews with the participants, family members of some Cologne citizens that were caught in the crossfire, newsmen... fascinating stuff.

This is part of doc about the battle that's worth watching: [link]

In addition to the above comments. If you get the chance, read a book called “Spearhead” by Adam Makos (or watch the documentary “Duel at the Cathedral”) which follows the lead up to one of the most famous tank duels of WWII that took place right at the footsteps of the Dom. You can follow the exact streets that the Germans and the American tanks took throughout Cologne and see exactly where the events took place. Specifically, two events, one involving a highly tense stand-off between a Pershing and a Mark IV tank that was suddenly interrupted by two civilians in a speeding car desperately trying to escape (took place at the intersection where the Christophstraße/media park u-Bahn station is). The other involved the same Pershing rounding a corner and suddenly coming barrel to barrel with a Panther at less than 100 meters from each other in front of the Dom (the panther was parked at the intersection of Trankgasse/Komedienstraße and Marzellenstraße whereas the Pershing peaked around the corner to confront the panther at Marzellenstraße and Dompropst-Ketzer-Straße).

While there are obviously no markers or indicators that anything happened now. The book is very descriptive on setting the scene and describing the aspects of the urban area that defined their strategies (the stories are told from both the German and American perspectives). When the city was rebuilt, they didn’t change much in terms of the street layout or the general building layout, so you can walk the routes and get a pretty good idea of what/where the tankers could see.

This was the pivotal engagement that helped secure Cologne in the hands of the Allies during the final months of WWII.

Highly recommended if you’re looking for more insight about Cologne and WWII!

2 min article In the Ruins of Cologne from New Orleans National WWII Museum.

9 min excerpt from March 1945: Duel at the Cathedral Documentary

1h41m Oral History by U.S. Catholic Chaplain Hannan of the 82nd Airborne Division who served as the Cathedral's temporary Pastor during American protection