What is reddit's opinion of Proov at Home PdG – The Progesterone Metabolite – FDA-Cleared Test Kit to Confirm Ovulation (7 Test Strips) – Works Great with Ovulation LH and HCG Tests | 5 Minute Fertility Hormone Tracking Kit?
From 3.5 billion comments
As an Amazon Associate I earn from qualifying purchases. The following content includes affiliate links for which I may make a small commission at no extra cost to you should you make a purchase. 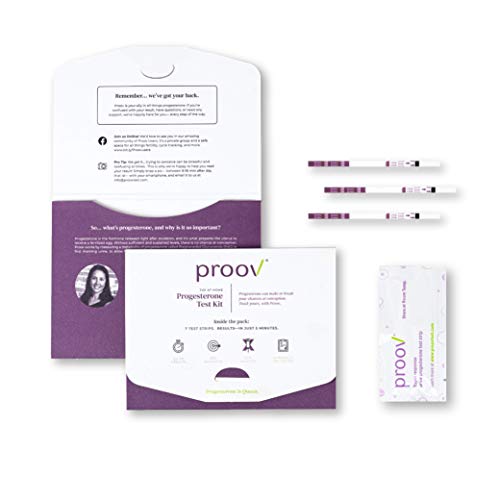 This product was mentioned in 11 comments, with an average of 2.82 upvotes

Overall, the test strips are relatively expensive, and they are intended to be used around the middle of the luteal phase, when progesterone levels are highest. They will not do a good job narrowing down exactly when you ovulated. But for a yes/no did-I-ovulate question, they're absolutely adequate.

EDIT: I’m definitely mixing up Morgan-Freeman-narrates-things with that meme from The Matrix. I do know that Morgan Freeman is not Morpheus. ��‍♀️

They’re expensive, though: $40 for 7 dip tests. But honestly, it’s brought me a ton of peace of mind. Shoutout to /u/Mother_of_Kiddens for the heads up. I bought them from amazon: [link]

Not that I know of. I get them from Amazon. [link]

If you are having regular periods, you *most likely* are ovulating, though there are a few other things that could be happening, such as LUFS (luteinized unruptured follicle). If you want to confirm ovulation (not excluding LUFs), your doctor would normally use a progesterone test during the second half of your cycle. You can buy over the counter progesterone strips these days on Amazon, which are significantly more expensive than OPKs but less than a trip to the lab for a blood test.

Interestingly, the reason for not using NSAIDs while trying to conceive is that it can cause LUFs.

You may or not be aware of r/TTC_PCOS, where you'll find compatriots.

See if it’s avail for UK

I took progesterone tests (PROOV brand pee strips I bought on Amazon), and never got a strong positive. Now I'm worried I might have low progesterone levels.

It's important to note, a positive PDG test is one test line, a negative will show two lines (the opposite of an OPK or pregnancy test). I did a baseline test on CD 9 as recommended. I then tested on 7, 8 and 9 DPO as recommended if TTC. I gave up at that point because the second line wasn't getting any more faint. Here are pics of the tests if they are of interest.

I have regular 29-31 day cycles, and while I do not temp, I have strong OPK progression. I also experience ovulation pain most months, including this one. I also track CM, and had EWCM for several days leading up to when FF predicts I ovulated (CD 16). My luteal phase is 13-14 days. I'm having progesterone symptoms now such as sore breasts (got a BFN on today's FRER pregnancy test 12 DPO, so basically just waiting on AF to show up this weekend).

I kind of bought these tests "for fun" hoping to do a review on here about them. They're expensive, but my HSA covers them. I was hoping to confirm what I figured, that I was ovulating, so that I didn't need to buy a wearable to temp (I wake several times before I get up, so a wearable would be the only reliable temping device for me). Instead, they just have me worried that I need to see my doctor for a progesterone blood test.

I read several reviews of them online saying they were unreliable. Some women who were pregnant said they had negatives with them. Others who weren't pregnant said blood tests showed high/normal PDG levels even though the pee strips said otherwise. They are supposed to detect ~ 6-9 ng/ml PDG. They recommend testing for ovulation 3-6 days after the LH surge, so perhaps I waited too long and it just confirmed that I wasn't pregnant? (I was following their TTC guidelines; they have separate ones for confirming ovulation, TTC, and for testing after a confirmed pregnancy).

I dunno, these things are new and there's not much out there about them, so if anyone has more insight I'm all ears! Sorry to write a novel, lol.

[link] - They are expensive for what they are but they really work. Here's my post showing you how these work: [link] <- This post is from a year ago and on 10 DPO I got a positive pregnancy test outside the 5 minute window. Next day I got a darker test and a few days later I confirmed with a doctor that I was in fact pregnant. Make sure that your doctor is on top of it and monitors your progesterone once you do manage to get pregnant. Prolactinomas tend to tank your progesterone and it can cause you to miscarry. I'd bet if you're not getting pregnant your progesterone is still too low and you aren't ovulating.

I mean, a blood test. Short of that temping, as others have said, or pgd test strips.