What is Reddit's opinion of Monoprice 15-Feet USB 2.0 A Male to A Female Extension 28/24AWG Cable (Gold Plated) (105435),Black?
From 3.5 billion Reddit comments
As an Amazon Associate I earn from qualifying purchases. The following content includes affiliate links for which I may make a small commission at no extra cost to you should you make a purchase. 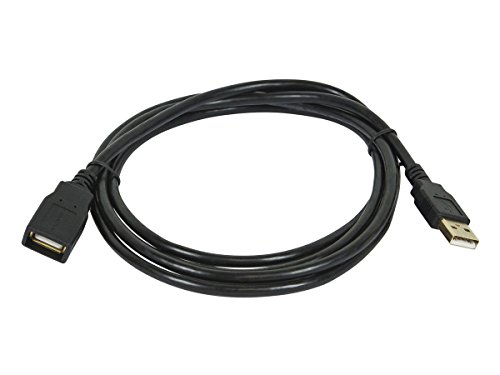 The USB standard enables cables up to 10-15 ft, these USB cables are readily available from numerous generic brands on the cheap. Such as a this $5 USB 2.0 A to A extender.

If you want something longer (say 50 ft), you can use USB extenders over ethernet, but you may need a powered USB hub on both sides.

I had issues too because usb slots don't extend and would get crappy reception. I bought a female to male usb extender and put my nortek in a better spot. No issues since.

We're actually considering offering more options in the store, but it's a little ways off. In the meantime, your best bet would be to grab one from Amazon like this one.

If the problem you have is that there is too much flex at the connector when attached and you keep separating the wires inside the connector I think the most skookum thing you can do if you are resigned to paying $40 to solve is:

15 foot 24/28 AWG USB cable from Monoprice - $6 on Amazon (about $2 on Monoprice, but let's get you everything on free shipping/assume you have Prime).

For about $5 extra you end up with a longer cable, a new tool, a bunch of parts, and more fire. And the cost of "upgrading" a new cable to the same spec of $0.

Runners up: Sugru the connector-wire connection or use armoured cable.

For all that relate to this, buy a USB 15ft extension cable off amazon. They are $6!!!!

I have an Alesis Command kit and have had this same issue.

I first encountered it when I tried using an Amazon Basics USB cable, and it would occur to me exactly as you describe it.

I originally had a much shorter cable which worked fine (was from an old printer), so I bought a Monoprice USB Extender.

The same thing still happens sometimes, but when I unplug/replug the USB cable from the module instead of the PC and then restart Reaper and EZdrummer, it all works fine (I suck).

I would suggest getting a higher quality USB AB cable, and then getting the extender and trying your luck with that.

I'm not entirely sure if it's an Alesis issue, or if we both got bad cables coincidentally, but that's what has worked for me. I hope this helps!

Depending on your receiver, you could extend it farther from where it's plugged in using this

I run Kodi on an older Bravia, and it's smooth sailing. I do heartily recommend getting a wireless keyboard (such as the one I use)—it makes life much easier. If you do, you'll probably want to buy a very short USB extension cord (or even a longer one like mine) and plug the keyboard dongle into it. Like many USB ports, the Sony ports generate some electrical noise (particularly the USB 3.0 ports) which can interfere with the signal the dongle receives. You'll know this by jagged trackpad response, and keystrokes either being delayed or not registering at all. Separating it from the actual ports by as little as five or six inches fixes any issue.

I do recommend getting a USB flash drive and formatting it with the Bravia for use as device storage. Sony's Android system and proprietary software don't leave much room for apps, and a little extra breathing room is nice. Being able to migrate the Kodi installation to the flash drive frees up internal storage for more critical apps. You might find your Bravia almost becoming a spare computer—I run Mozilla Firefox For Android and Microsoft RDP daily on mine.

Speaking of critical apps, I recommend installing (or sideloading) an FTP server to internal storage, which will make backup and maintenance of your Kodi installation easier. (I like this one, which is wonderfully light and efficient. Just don't expect a lot of features.)

If you do decide on that Sony, I think you'll be quite happy. Been pleased as punch with mine!

What television are you using? On a Sony Bravia, you can go to Settings > Keyboard > Manage keyboards and enable the keyboard you wish to use. Gboard is standard on Bravias alongside the Leanback keyboard.

If your television has a USB port, a wireless keyboard with integrated trackpad can be heaven. I use the Logitech K400 Plus on my Bravia, and it's awesome—the trackpad works, and you can control almost everything your television does from the keys. Once you drive Kodi from a keyboard, you'll never want to go back to using a remote control.

Should you go this route, however, be aware that USB ports (particularly USB 3.0 ports) generate a lot of signal noise which might interfere with keyboard reception. In such case, you'll probably notice your trackpad gets jerky, and keystrokes will sometimes be delayed or dropped altogether. Mine gets cranky if I'm sitting across the room on the couch. But that can be resolved easily enough with a cheap USB extension cable to separate the wireless dongle from the ports.

I use a 15-foot male-to-female cable, and keep the excess curled up beneath the television. The dongle is plugged into the extension cable and sits beneath the television, where it is distanced enough from the ports that interference is no longer a problem. The extra length is useful if I want to use a USB game controller or other USB devices with my television.

Yeah I would do the same if I had a 3d printer. I was just about to grab this cable when I decided to grab the mount instead. Not sure if it would work but seems like it would be fine, and $4 is a great price.

The following are the items I use: