What is Reddit's opinion of Monoprice 5-meter USB 3.0 A Male to A Female Active Extension Cable, Black?
From 3.5 billion Reddit comments
As an Amazon Associate I earn from qualifying purchases. The following content includes affiliate links for which I may make a small commission at no extra cost to you should you make a purchase. 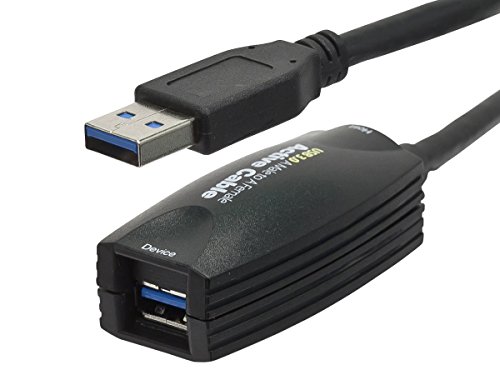 well the sensor has a good length of cable to it.

I use 15' active USB 3.0 extensions for my two sensors, so combined with the built in cable I get well over 20' with each sensor.

They are listed in the wiki, but here is a link for them (note Amazon Canada)

I have 15' USB 3.0 active extenders on each of my front 2 sensors. They say 10' is the limit for extension cables because anything above that and you can get signal degredation. So active extension cables have electronics inside to boost the signal to ensure a constant feed. Thus you can go longer distances with them.

Not sure where you are in Europe, but here is a link for my exact extenders (Amazon UK link)

10m extension cable? 35 feet? How far away is your dresser :P

Not sure I could recommend a working cable at that distance. I use 2 - 15' active USB 3.0 Extension cables (one for each sensor) and they work great.

Yeah just tried your setup, both upside down with same issue. So I flipped the one back right side up on a tripod(worked for weeks) and it's still shifting. But in the process I notice that that one sensor is now registering as USB 2.0 instead of 3.0 like it has been. It's connected using an active 3.0 mono price cable. [link] Randomly it'll say 3.0 the disconnect and reconnect and it's 2.0. I'm using the 309a fresco drivers also. Going to try it on one of my asmedia ports just for the hell of it.

I don't know about vive. I have a Samsung Odyssey, and this USB works with it--

For the USB I had to put a powered hub at the end of it before the HMD as I got a horrible screeching sound without it. Don't think that applies to the Vive.

You want an active extension cable. I use this one--

And you will probably need a powered USB 3.0 hub as extensions can cause a loud static issue because of power instability.

Yes, it's crazy, the USB standard in general 🤮. You could look for used official link cables, which is probably the best in terms of quality, realtively thin when compared to others and good length. Some people sell at 30-50, but very hard to find.

Official Oculus 3rd Party Recommendation Anker makes some pretty solid cables, and this was fine, I used it for a tiny bit, will probably want a right angle connector of sorts, the product listing on the support page is now 3 ft instead of 10 ft for whatever reason so not sure why. If the 10 ft doesn't come back, you can just use in conjunction with an active usb extension like the one below.

Monoprice 5m Active USB Extension This would also probably come in handy if you wanted like, mega range to your play space.

One of the cables I used third party was Dethinton a bit on the thick side, so I returned it.

Another option could be going for Virtual Desktop, purchase through Oculus Store for the Quest, NOT THE RIFT, and you can add a patch through SideQuest that lets you wirelessly stream games from Desktop to Quest, pref a 5ghz / Wifi 6 router to have a good experience. I've used it, and honestly I don't notice any lag, people have complained of latency on Expert/Expert+ on Beat Saber, but I don't really play the game, but a new update has came out which has reduced latency and it's probably about 30ms overall from 40 for me I think. Some reports better/same as Link cable. There's tons of threads out on it.

Sorry for the wall of text, a lot of info to take in, and I'm kinda a stickler for stuff like this and knowing what I buy and doing my due diligence so I don't end up regretting or making a wrong purchase.

I personally am using VD (Virtual Desktop) and it's been my go to, it's been great so far when I'm in the same room, and I don't feel any lag and I'm more than happy / fine with how it looks.

This is what I use and it works fine: [link]

The 10 foot Anker and 15 foot Monoprice Active USB 3.0 Extension work for me, so far.

I have 4 sensors, each mounted on top of 7'6" DIY stands made out of cheap 5'9" Ikea floor lamps..2 lamps per stand, each in it's own corner. The 8' long stock cables of the sensors only have a few inches worth left over when mounted on the stands, so extensions are a must no matter where you position them. I use the 'Monoprice 15-Feet USB 3.0 Extension Cables' from Amazon, with the sensor in the far corner needing 2 cables to reach the stand. This gives me a 10'x10' area, with an actual playspace of 7'x7'. I also shelled out for a Startech 4 port USB3.0 PCI card recommended on the Oculus blog. The sensors on USB3.0 use a lot of power, so you'll need to connect either a SATA power adapter or a molex power adapter to the PCI card...if you go that route. I haven't had any issues whatsoever, completely glitch free. I used the Sensor Bounds app in Oculus to make sure the sensor beams covered my play area high enough, as well as covering the corners closest to the stands. The beams aren't 90 degrees, so the higher the top of the beam, the less the corner gets covered by the lower part of the beam. It takes a few minutes, but it helps to completely cover the entire play area.

Btw...the best part of my DIY stands...they only take up 10" squared. Tripods are at least 2' squared. I considered microphone stands, but they only extend 5' or so. Nowhere near tall enough.

I've had these cables and hub since my Lenovo. Upgraded to Odyssey Plus and they also work fine, and fix the screeching audio problem, which the Lenovo had as well. The Hub goes between the 15ft USB and the HMD USB. The hub has switched ports, so you can switch off the HMD when not in use so it doesn't draw any standby power.

This fifteen foot one works, I just had the random audio static problem most get with extension cables, which I solved with a powered USB 3 hub.

They both work great on the HP, and the Lenovo.

This one works for me

I use 2 15' active USB 3.0 extensions for my front 2 sensors and I use the included 16' active USB 2.0 extension for the third sensor that is in the back.

Not sure how much space you need to get the 2nd sensor to the back of your play space. But when only running 2 sensors you should aim for both to be USB 3.0 (unless you run into issues with your motherboard). Any sensors above 2 should then just be plugged into USB 2.0 ports (again, you might be able to get away with more in 3.0, just depends on your motherboard).

These are the extension cables I use for my front sensors:

Here is an amazon UK link:

my HDMI extension for the headset (10'):

Yeah the headset does tilt a bit, enough to press into your face. If you take it off and just hold it in your hands you can see the side arms can rotate up and down, maybe like 10 degrees or so, which in turn changes the angle of the display part. On me this shift is enough to almost close the nose gap.

I use 2x 5m active USB 3.0 extenders that look like the Monoprice / CableCreations ones (a lot of people gave them good reviews on here), but they're generic branded so cheaper and would be the same components, as a few companies just rebrand them:

Yeah, it was one of the ones on the wiki.

Yo get those referral codes off the links please. mods?

his links without referral codes: