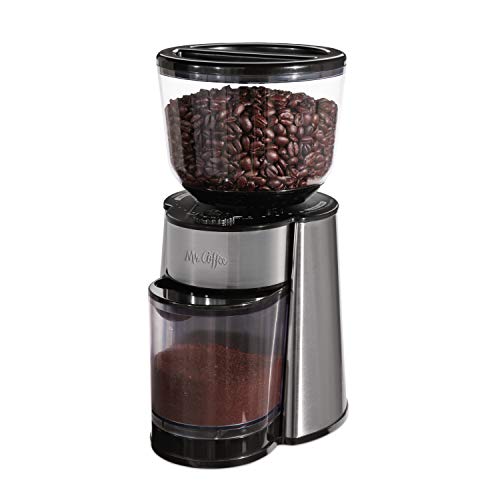 This product was mentioned in 18 comments, with an average of 0.83 upvotes

I'll probably get downvoted to oblivion for this, but I got this 5 years when I first started to REALLY get in to coffee. Now, it's far from the best, but for the price, it performs well. That said, I want to upgrade, but it just won't die. I've started to submerge it in water to clean it hoping I kill it, but nope, it still lives. My only complaint is that it can be static-y and grinds can cling to it making it somewhat messy at times.

Honestly, I don't see myself ever spending $100 on a grinder, even if I have money to blow, because I'm just not that much of an enthusiast (clearly). I had a cup of black, aeropress brewed coffee yesterday at my friend's house that was ground in this, and it was delicious in my opinion, so I guess my taste just isn't that refined. So really I've already decided on getting something cheap, even if it's crappy and won't last forever, I'm just looking for some tips on whats the best cheapo unit I can get. Like I've seen Hario thrown around a lot on this sub, so I'm wondering if that's the way to go or if there is a decent electric one for cheap.

Wow, thank you for pointing out those fake reviews. Would you be able to tell me what makes the Encore worth $100 more than this burr grinder?

If you're not doing espresso, have a look at this automatic burr: [link]

Yes, there are issues, but it's an automatic burr for $30. Also, Mr. Coffee's warranty service is pretty good. Mine failed in the first couple months, and they sent me out a brand new one that has been fine ever since.

I have a Mr. Coffee mill burr grinder that has done just fine for me for years. It holds 12 oz. of beans in the hopper. Have to do a couple of grind cycles though. Just used it to make my first batch in my new Toddy this weekend.

I just thought of a variation of this guaranteed to get you up and make coffee. Get a burr coffee grinder. (I have this: www.amazon.com/Mr-Coffee-BVMC-BMH23-Automatic-Grinder/dp/B004T6EJS0/ref=sr_1_5; it's cheap; it works great; invest a dollar more in non-shitty whole-bean coffee that will last in the hopper.)

Pour the water for two cups of coffee into a five-cup coffee maker, and put in the appropriate cone-filter. (I use this: www.amazon.com/Farberware-103743-5-Cup-Coffee-Maker/dp/B00FN3HZ84/ref=sr_1_3; you can get it much cheaper at Walmart, like $20 or so; it has a timer; it will brew two cups of coffee faster than a Keurig machine; it is great.)

Put the coffee grinder by your bed. Feel free to also put the coffee maker close by, ready to go. Have cups or mugs and cream and sugar nearby. Make sure the grinder is set to grind 3 cups worth of beans (it's better if you use a little more coffee than they always ask for). Okay, we're set up.

When your alarm goes off, hit the grind button like you would normally hit the sleep button on your alarm. The apocalyptic sound of the grinder will absolutely snap you out of dreamland. Then immediately, go empty the grounds into the adjacent coffee maker, hit Brew, and within like 2-3 minutes max you have two cups of freshly-ground coffee waiting right there, smell and all, to slug down your throat while you curse the world.

/u/thatotherguy321, I have that Cuisinart. Skip it if you're doing French Press. It does OK if you're using a paper filter, better than blade, but it produces a TON of dust.

I just upgraded to the Encore, and it's great, but before I got the Encore I tried out this Mr. Coffee burr grinder. It says it does espresso, but wouldn't go fine enough even for my V60. It also produced a good bit of static. BUT, it excelled at not producing nearly as many fines or as much dust as the Cuisinart.

I'd take that Mr. Coffee every day of the week over the Cuisinart.

Also, the Cuisinart has what appears to be plastic burrs. I've had the grinder from years and haven't had them break, but I don't really trust them now that I know that. Not sure what the Mr. Coffee burrs are like - probably the same, but I know it did much coarser grinds for French Press.

I'll keep that in mind. I ordered a cheap one with good reviews, can't remember the name now. I can edit when it arrives. It's not top of the line by any means, but it beats grinding by hand for 45 minutes to pull a shot.

EDIT: It's this one. An inexpensive one, not fantastic, but it has decent reviews. It's not a typical conical grinder, and some of the construction is plastic and seems less than sturdy. I'll have to see how it performs. Maybe when I get my next paycheck I can grab a refurb Maestro. Thanks for the tip!

I have a hand burr grinder that I use for my french press, but also a standard blade grinder.

Would the blade grinder work for a moka? I stopped using it for the press since it provides poor results.

edit: WTF! Cheap burr mill? I didnt think you could get a quality one for under ~$70

I have this one:

I got one of these and have been very happy with it.

I am talking about this one:

It's definitely not the best, but for $40, it does a pretty decent job and doesn't burn the grounds, which is the most important IMO

I personally have a Baratza but I wasn't always so fortunate. I have worked up the ladder of burr grinders. I don't see anything wrong with using a cheap burr grinder (electric or hand) to start off. Anything is better than putting coffee through a machine at a store that probably never gets cleaned.

Though I have never tried it (nor do I recommend it. If you can spend more, please do!), Mr. Coffee has an electric grinder on Amazon for $30 ([link]) and I personally used a Hario ([link]) eventually, once you get hooked on brewing at home, getting a quality grinder, such as the crowd favorite Baratza for ~$130, will greatly improve your brew.

It's this one. I have it set to the coarser setting. The coarser it gets. Should I bring it down?

For super-cheap but well worth the money, I'd actually suggest the Mr. Coffee automatic burr grinder. I produces a surprisingly consistent grind for a meager $40.

For an intermediate option, the Capresso 560.01 Infinity conical burr grinder at a fair $80 is your best bet. It will produce a greatly consistent grind without overly heating the beans and last a long time.