What is reddit's opinion of Mueller Green Fitted Wrist Brace, Black, Right Hand, Small/Medium?
From 3.5 billion comments
Created by @mouseofleaves.
As an Amazon Associate I earn from qualifying purchases. 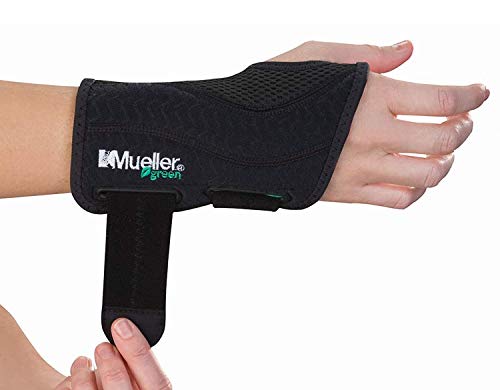 This product was mentioned in 17 comments, with an average of 1.00 upvotes

You really need to see a doctor but you already know that. I delayed surgery for four years because I didn't have insurance, and I got through it by sleeping with wrist braces. I like the kind with velcro and a metal bar. When symptoms were bad I would wear them in the day. Below is a link to the ones I used. They're cheap but work great.

If you can't get wrist braces, try an ace bandage. Wrap it so it feels snug but not too tight. If you think your mom would flip out, keep them hidden.

My mom would alternate between believing I had illnesses I obviously didn't have and refusing to believe I had things I really did have. I fell over once as a kid and my mom spent the next fifteen years(no exaggeration) trying to convince me I had a spinal injury. But I had over 100 chicken poxes before my mom would admit that I had them--even though 2 other kids in the house already had them! She wasn't a terrible mother, overall she was good, but when it came to my own health she was very loosely tethered to reality.

I got mine off Amazon for 13 bucks . Mueller Fitted Wrist Brace, Black, Right Hand, Small/Medium [link] It's okay, does the job! I had one from the doctors before cause I'd previously been a waitress for 5 years and developed carpal tunnel, but I lost it! I can say that those are better, so if getting it through insurance is an option, I'd definitely take it!

And go see a doctor, before the pain forces you to stop playing forever. Seriously.

I started experiencing some Ulnar pain on Friday night. It didn't get better on Saturday, so I haven't played mouse-intensive games since Saturday.

I bought a wrist brace from Amazon (1-day shipping, got it on Sunday) and I've been wearing it as much as I can. It feels a little better today, and it might be better in the next 1-2 days.

Maybe take a break from wrist-intensive gaming and try wearing this a few hours a day until your pain gets better:

I have these, would they work for this? [link]

From the looks of the brace it looks like your wrist can still move into flexion or extension depending on what your doing, but I wouldn't really know because I've never seen a brace like that. Ideally you want your wrist to be closer to a neutral position so that the tendons and nerve can have adequate space to move through the carpal tunnel which can be difficult when you're typing all day.

My wife works on a computer all day and I got her a brace like the one below because i thought it would be able to hold her wrist in a more neutral position while she was typing because it crossed the wrist joint.

get the one for the right wrist then

its not your arm, its your wrist

you gotta have your chair/desk aligned or you'll fuck it up, also get a wrist wrest

if you already fucked up your wrist get this while playing, wear this while gaming

Oy, so sorry about this. It's just awful and debilitating.

[Here is the brace I use at night](https://www.amazon.com/gp/product/B002NLGNW8/ref=ppx_yo_dt_b_search_asin_title?ie=UTF8&amp;psc=1)

[And compression gloves, worn during the day, are also game-hangers](https://www.amazon.com/gp/product/B08DG1HVNQ/ref=ppx_yo_dt_b_search_asin_title?ie=UTF8&amp;psc=1)

[And massage can also help](https://www.youtube.com/watch?v=kkQs9ytO20M&amp;ab_channel=HMMassage)

The best of luck to you!

I've been using this after my old one started to fall apart and works pretty well imo. It'll take some getting used to as it will force your wrist in a certain position. Note you have to be consistent and it'll take weeks for you feel a difference. You can wear it throughout the day if you can make it work. I also recommend doing some wrist strengthening exercises like wrist curls with light (2-5lb) dumbbells. You want to make sure your wrist maintains strength as using the brace means you will be using less strength in the general area

I think these ones might be good with a remote: [link]

Wearing these right now. Highly recommend them. I'm in front of a computer most of my day and was starting to get wrist pain. These helped a ton.

I had some wrist pain when I started poling. An instructor recommended this to help strengthen fingers and forearms and wrists. I also use a brace similar to this one when I need to give my wrists a break and it's helped a lot.