What is reddit's opinion of Mueller Max Knee Strap, Black, One Size Fits Most?
From 3.5 billion comments
Created by @mouseofleaves.
As an Amazon Associate I earn from qualifying purchases. 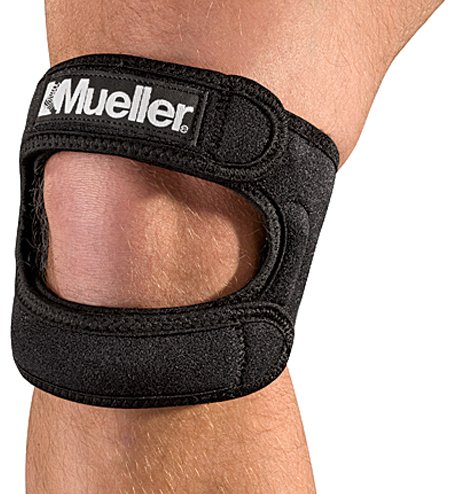 This product was mentioned in 4 comments, with an average of 0.75 upvotes

You might need to find a good knee brace. I used to have knee pain when I ran but my wife (who is an ER nurse) bought me a couple different ones to try it made the world of difference. I'm now up to running 6-7 miles every other day without knee pain.

There are exercises you can do HIIT with that are low to no impact. I have two bad knees myself and do a couple days of HIIT a week on either a stationary bike, a rowing machine, or a combination of both. I bought two of these and with them only have knee pain above and beyond what's normal for me when I go at it particularly hard or don't rest like I should.

The 'sprint/run/sprint/run' bit obviously doesn't apply, but that doesn't make HIIT less of a valid suggestion.

Hello fellow knee gimp. I have two bad knees and started really putting effort into exercising around where you are now. Our stats are fairly similar otherwise too, so hopefully I can help out. I don't know if you have gym access, but if you don't, there's still plenty you can do without.

First, I would suggest purchasing one of these if you have the means. I have two that I use religiously and they help a ton.

Excercise-wise, currently I am doing a combination of High Intensity Interval Training (HIIT) and resistance training. When I was around the point you're at I was doing strictly cardio. I lost maybe 10 lbs over a month, then plateaued hard. I added resistance training, turned up the intensity on some of my cardio workouts, started drinking a shitton of water, and I've been steadily losing ever since.

Anyway, HIIT is generally associated with running really fast then jogging/walking then repeating a few times. The wikipedia article above can explain it better than I can, but there's a fair bit of science that shows this method can burn a whole lot of calories relative to the amount of time spent. The point I want to get across to you in particular though is that a) HIIT works very well with keto and will likely give you great results and b) HIIT doesn't necessarily have to involve running at all.

As far as exercises that you can do HIIT with that are low-to-no impact, you're on the right track with the bike. I don't know if you're talking stationary or a normal, outside, go places bike. If you're doing a stationary bike, I would suggest avoiding recumbent bikes. They don't work your quads as hard in my experience and the motion puts more pressure on your knees. The upright stationary bikes seem to put more focus on your quads and hip flexors. A normal bike obviously should fall into the same category as the upright stationary.

I'm also a big fan of rowing. This probably is only something you can do with gym access (unless you live somewhere it's warm enough and have a canoe or something), but it really is a great work out. You'd have to give it a try to see how your knee reacts to it. My knee issues really only flare up when I'm applying a lot of weight to one of the joints. Your knees will be moving in the rowing motion, but you can control it in such a way that the majority of the force is being generated by your upper body and your legs are just along for the ride. You're not really trying to win any races here, so if your knee can't deal with applying force with your legs too, then don't. Beyond being less painful on my knees, I feel like I'm getting more bang for my buck when I row due to the number of muscles I can hit with just the one exercise. HIIT applies here as you would expect, just do intervals of high effort then rest.

The resistance training bit is more or less just to my taste for what muscles I'm interested in working on. If you're really interested I can give you the details of what exactly my routine consists of, but it's late and I think I'm more or less rambling at this point. Hope this helps, and good luck friend!

I've found this strap to be very helpful with my ITBS.