What is reddit's opinion of MUJI Makeup Facial Soft Cut Cotton Unbleached 60x50 mm 140pcs?
From 3.5 billion comments
As an Amazon Associate I earn from qualifying purchases. The following content includes affiliate links for which I may make a small commission at no extra cost to you should you make a purchase. 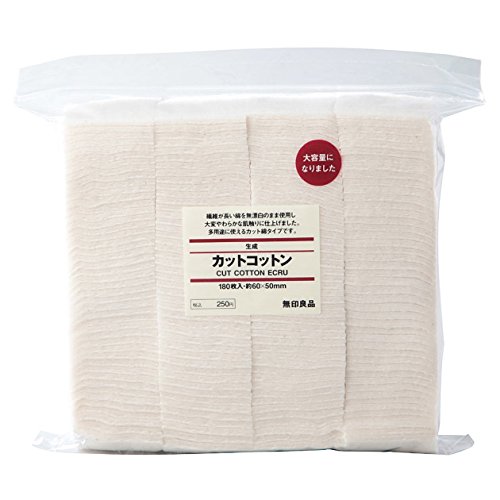 This product was mentioned in 18 comments, with an average of 1.28 upvotes

I ordered a bag from amazon which had the older style packaging like in the picture you posted but the one that arrived had the new style (the one on the right). Which was the same stuff that arrived when I ordered directly from Muji.

/u/kasumiwave I would recommend getting the Limitless Plus RDTA. Dead simple to build on. Lots of space and a 7ml tank.

For wire, I get mine from wireandstuff.co.uk

Cotton - Amazon sells big bags of Muji / Jap stuff for about £6. My bag has lasted me about 2 years so far.

Top tip - Vaping cotton is exactly the same as the stuff above, but with a bigger price tag!

140 MUJI cotton squares, it took a month to get them but hard to argue against once I had them lol still waiting on ceramic tweezers i ordered at the same time : /

I'm a big fan of Muji and would highly recommend picking some up. This will last you a long time.

Don't purchase that cotton it's way to much the same Muji Cotton can be purchased in bulk on Amazon for a cheaper price and instead of getting only 10 pieces you get 140! It will last you forever! It's great cotton and you won't have to buy more for possibly close to a year.

Yo, I'm also UK based. I recently bought this pack from amazon very cheap and should last you a very long time!

You can buy these items separately (for cheap via Fasttech, or domestically), or, if you don't mind the markup, in DIY kits (like this Coil Master kit).

Rebuilding isn't that hard, and it's so much cheaper than buying coil heads. There are tons of Youtube tutorials (or written ones) to help you get into it. Building and wicking RTA's is a tiny bit trickier than building RDA's because of the size of the build deck and potential leaking issues, but that shouldn't discourage you.

I can't recommend the Aromamizer, because I don't have one, but in my opinion a tank with a velocity style deck is a good idea. You can get an RBA deck for the TFV4, too.

For those who don't see this site as reputable like /u/StreetTrash614, here is an Amazon Prime page for the same product.

Dunno if there is any difference, I just searched amazon yesterday. When I bought it I did all my research and decided that was the way to go. Its been a couple of years and frankly I don't remember now. I suspect that I found that it is in fact organic despite them not saying it in the Amazon listing. I do know that its the exact same stuff my local vape shop sells for £3 for 5 sheets (I happened to be there when they were repackaging the stuff). Like I said, there is nothing wrong with the expensive options like Cotton Bacon, they are just very expensive by comparison and they all taste the same to me.

As to wire, some guys can taste one wire over another (I can't) and of course if you are using Temp Control then you need SS, Nickel, or Titanium. I tried Temp Control when I started but sort of lost interest after 6 months or so. By then I had settled on 316 stainless simply because that way I can switch back and forth between Temp Control and Wattage. I have been using primarily that ever since. I use 24 gauge in my big dual coil attys, and 26 in a goon LP as I have to build long tiny little coils to fit in there. (everybody hates this atty, but I have always liked it and I love how small it is). But primarily 24 gauge 316SS. If I could only have one wire, that would be it. Most of my mods are DNA and the new recall function has been great so I am glad I still use SS.

I have some NI80 in a really fat gauge that I use in one particular mech setup, and as I said I cannot be bothered to make my own claptons anymore so I just buy that stuff premade on spools from China, or even wound into coils from time to time (particularly for when I am traveling as I don't want to drag all the building crap around with me, so premade coils and some cotton and scissors is all I need).

All that said, I probably have 25 spools of wire in my vape cabinet. We all do eventually. You will end up having to do the same thing before you settle on the 2 or 3 that you use all the time. Just buy cheap short spools until you know what you like. (I have a huge spool of Titanium in there somewhere that I used once and will never touch again....)

You want unbleached Cotton, preferably in pad form. something like this: [link]

Or are the pictures your new bags?

Well, that's not a bad combination either! The X Cube Ultra is just a bigger H-Priv, really.

Those batteries will be fine for that mod. I'd recommend starting off with the included coils then once you want to try the RBA section, buy yourself a coil building kit like this. As a rule of thumb, it's good to know about Ohms Law so read up on that. You'll also need some A1 Kanthal wire and some organic cotton. Once you have all that, you're good to go. It's quite the investment but it's worth it. Your tank will leak, your cotton will burn but by watching some YouTube tutorials and plenty of practice, you'll get there. For all his faults, Rip Trippers has a good few guides on building and wicking, so give them a watch.

I bought a bag of this recently and it's amazing. I have no break in period and the flavor is amazing. If you search you can find it under $10 on amazon. I have also used Koh Gen Do cotton. It had a day or two break in time, but was great after that.

Between the two I prefer the MUJI, for the lack of a break in period and it roles great with the scottish role method.

try this as long as its non-bleached and well organic it should be good.

RDA- I don't personally have experience with the Troll, but in general, you'll want a smaller chamber and the lesser side of airflow in order to experience better flavor. I get better flavor out of my Mutation xv4 than I do out of my Doge X, and better flavor out of my Derringer than I do out of my Mutation. If you look at pictures of those, you'll see that the size and airflow options differ greatly between them. If it were me? I'd give that Sapor a try, it's an interesting concept and the positive block (post with two holes in the middle) is a nice thing to have while you're learning.

Kanthal - 26 is where I started when I was using a 30w box primarily. That should suit your needs just fine. Nail clippers do work, but you'll find they wear down pretty quickly. I personally just use some cheapo Home Depot flush cut wire clippers.

Jig - No experience here, I just use a precision screwdriver set that has sizes ranging from 2mm-4mm in various increments. YMMV with the jig.

Cotton That is an overpay for cotton. You might want to get that from amazon. 5 sheets would no doubt last a fair amount of time. I think I've gone through maybe 10 sheets in 3 or 4 months. For reference, Here is the full size package of MUJI cotton.

Pick up this one.

In my experience, cotton is just cotton be it a cotton ball or japanese cotton. The major difference I get is for the first few hits cotton balls tend to have a cottony taste whereas the japanese cotton tends not to. That said after a few hits, as far as I can tell, they're the same. I do still prefer japanese cotton though because the pads make wicking easy. I'm waiting for this to arrive in the mail.

As far as branded kanthal, kanthal is kanthal. I've never bought pre-built coils or pre-made twisted/claptoned/etc.. wire because it's pretty easy to do all that yourself if you have some kanthal and some patience to learn. if you look for lightningvapes on amazon or lightningvapes.com they're legit and cheap. $7 100 ft of 26awg.

I'm running a single coil build on my Doge clone with the KBox atm, 2x32g twisted, then twisted with 28g @ 1.1ohm. I have rewicked 2x since that pic (terrible wicking) as I just got some Muji cotton and a minimal wicking as described over here works wonders. 20 watts works ok, but for my coil, 30 watts is nice.