What is reddit's opinion of My Weigh SCMXL700T 700 lb 320kg Talking Bathroom Scale?
From 3.5 billion comments
As an Amazon Associate I earn from qualifying purchases. 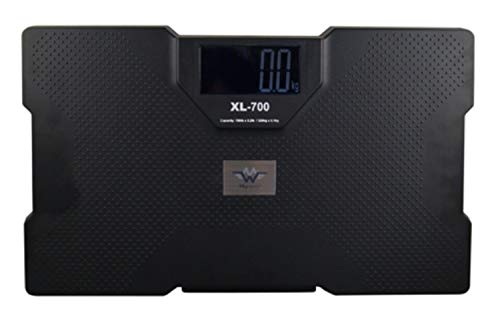 This product was mentioned in 20 comments, with an average of 5.80 upvotes

I believe it’s this scale that goes up to 700 pounds. Judging by the customer review pics, it doesn’t seem possible that it’s wide enough to accommodate amber. conspiracy situation I believe that Becky is stepping on the scale holding on to some weights

Right before I began this way of eating, I purchased this scale from Amazon: [link]

It is 68 dollars and it speaks which was nice when I first started using it because my belly made it difficult to see the numbers.

But I'm 6'5", so I am a lot taller than most people on the show, and carried the weight differently.

I finally found a good bariatric scale at Amazon that goes up to 700 pounds. It's a wide one so it can handle my wider stance and I don't lose my balance while on it. They didn't have such a scale a year or so ago when I looked, so it was a great (and timely) find.

Down 140 pounds so far, and haven't needed insulin at all this year. Last year, I was using a third of a vial every day. I've spent nearly $10K on insulin over the past 6 years. Now, A1C has dropped to 5.4 and blood sugars are normal.

I had always looked for bariatric scales in the past and came up short, either on weight limit or because they were too narrow for my wide stance. When I checked Amazon earlier this year, I found this one, but they now also have a few others that have high weight limits and wide bases.

Nah, she's got a different one now. You can find it on amazon if it's this one

I know weighing at 400lb+ it can be hard finding a scale that can handle your weight and be comfortable enough to stand on. I bought a scale off of Amazon a couple years back when I hit 400lbs for the first time. It can support up to 700lbs and its very wide so you don't have to squeeze your legs together to get on it. Also for some of us who can't see the number because of our belly it has a voice option where it says your weight out loud. Very sturdy and great price at about $54. Only problem is that Amazon no longer has it in stock.

We bought a scale that goes to 700 pounds for our friend on Amazon. It is really affordable and I hope that this will work for you. Unfortunately it isn't currently available, I'll keep looking for you. Keep up the good work! You are amazing! [link]

Amazon has a talking scale that has a 700 lb. capacity for less than $80. It is very wide also (at least as wide as Dr. Now's scale if not wider). I own it and it works fine. There is no reason for the vast majority of the people on this show to not know their weight if they so choose.

>I hope by then he found a scale, otherwise I will have to take him to the city dump to weigh

Here's a scale that works for that weight range: [link]

Miss Stella, this is the scale that I bought right before I started this way of eating: [link]

It goes up to 700 pounds and it speaks which was nice because at the time it was difficult to read the numbers because of my belly sort of kind of sticking out too far. It is now one year later and still going strong using the same batteries that came with it. And ma'am, I will ALWAYS read your messages.

I use this scale

I am on the heavier side, so not everyone will need something like this, but as a larger "loser", I have found it to be pretty good.

You can get scales that read up to a thousand pounds for less than $300. I realize that this cuts deeply into the food budget so isn't an option for most of the people who would be on the show.

This seems to be the best deal going right now and would work for most normal morbidly obese people. Not like a James K. or a Sean, but most.

Totally a real thing. As a matter of fact, my bathroom scale would weigh the OP. Amazon carries several models for people that weigh 500-700lbs. 700lb scale

Another user posted a link to this scale recently if Amazon ships to you!

I needed a heavier one (up to 700 pounds) when I started r/keto three years ago:

A bit over your $50 limit, but I used this scale when I first started. [link] It worked well.