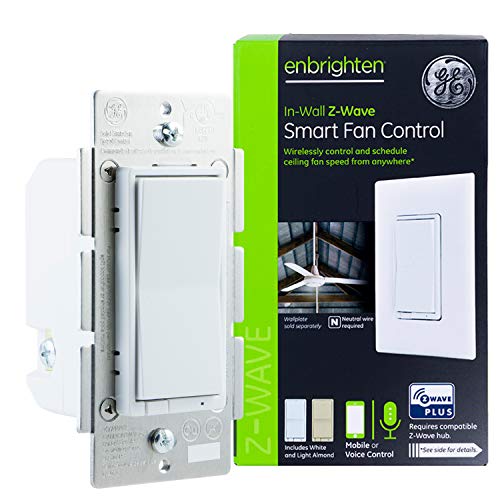 This product was mentioned in 17 comments, with an average of 1.06 upvotes

If you're going zwave fan control you really need to go GE. I have three they work perfectly and they are compatible with their 3 way add on switches. I have one of those (on a GE switch not fan control switch) too and it works perfectly.

I have these and really like them: GE Enbrighten Z-Wave Plus Smart Fan Control, Speed ONLY, in-Wall, Includes White & Lt. Almond Paddles, Zwave Hub Required, Works with SmartThings Wink and Alexa, 14287 [link]

They do require a hub, something like Wink or SmartThings that can manage zwave devices.

There's not a lot of options that will support the switch/ fan combo. If you are running hue bulbs, you can just remove the light switch completely. Then use this: New Model: GE Z-Wave Plus Wireless Smart Fan Speed Control, 3-Speed, In-Wall, Includes White & Light Almond Paddles, Controls Fan Speed ONLY, Works with Amazon Alexa (Hub Required), 14287 [link]

It will require a z- wave hub, but if you have one already, it will give you smart control of the fan, and with the lights in the always on position you will just use your smart controls for those as well.

You'll need a hub for this. GE makes a zwave smart fan control. Can turn it on/off as well as low/medium/high setting. I have 3 and they work flawless. Go with a SmartThings hub as it sounds like you want a no fuss solution. [link]

I use these for two fans in my house. They work fine and never had an issue. I do wish they had some display LEDs so you could see what setting (low led high) you were on. Other than that they work great.

That would give you much better control over everything. For me and all my fans, I have exactly one control. So I need this to control fan/lights unless I want to run a secondary wire back (which I don't)

I have the same thing. I logged into the SmartThings IDE and noticed that the Fan Dimmer that shows up correctly is listed as:

However, the one that Google Home shows as a Light is listed as:

Both of them were purchased from Amazon: https://www.amazon.com/gp/product/B06XTKQTTV

My guess is that SmartThings is reporting it incorrectly.

If your remove the radio from the fan you can then install a GE zwave fan switch . I have two of them and they work great.

GE has a fan control switch/dimmer.

So I'm looking at this fan control and this light switch. That should do it?

This depends on your ceiling fan. If it's only a fan with no light kit, this is super easy. I bought this GE Z-Wave fan control for my basic fans. I used the pull chain to set the fan to high, and then unscrewed the pull chain and tucked it into the housing so unknowing people don't yank the chain and screw up my fan speeds.

If you have a fan with a light kit, it's a little different. You can go with something like the Insteon Fanlinc which requires an Insteon Hub, or you can run some 12/3 or 14/3 wire up to the fan, where the hot would run the fan, and the "other hot" would run the light, then have two switches in the wall - one for the fan and one for the light.

If it's just a normal dual gang box then I'd just put two switches in. Also note that there's a specific switch for fan control. I have the same setup with one dimmer switch and one fan control in the same box.

Edit: See this topic about the fan control for a better explanation than what I could give.

These work just fine with Wink:

This can definitely be done (I actually just did the same), but will depend a bit on your setup. I'll also say that although none of the changes are permanent, they might be a bit of a pain to reverse when you move out, and you'll have to be willing to do a bit of electrical wiring.

The trick is to remove the remote receiver module completely so that the switch can have full control, and you can then make the switch a smart switch. This may not apply for all fans, but I believe that in most of them the remote module is a completely separate component that's housed within the fan body near the ceiling. If the remote was added on afterward then this is definitely the case. If you can find the manual for your fan that will be the easiest way to tell, and if not you can remove the housing near the ceiling and look for yourself.

TURN OFF THE BREAKER FOR THE FAN NOW. Don't get yourself electrocuted.

The remote module is likely about the size of two decks of playing cards, and has two wires in*, and a three wires out. With any luck they're well labeled. There should also be an unconnected (capped) wire inside the housing. The capped wire should already be connected to the light switch that doesn't currently work today, and the other hot wire that was previously connected to the remote module is the other light switch which does work but which you never use. You can connect the two hot wires to the "fan" and "light" input wires on the fan itself using wire nuts and effectively remove the remote module (it's like the remote is "on" all the time) and rely solely on the wall switches.

Turn the breaker back off, and replace the fan switch with a smart switch, such as this one. Turn the power back on, pair the switch with your home automation hub, and program away. You can also pair a z-wave remote like this one (look for deals, they're commonly very cheap) to get the push-button remote functionality back.