What is reddit's opinion of Nintendo Switch Wired Internet LAN Adapter by HORI Officially Licensed by Nintendo?
From 3.5 billion comments
created by @mouseofleaves 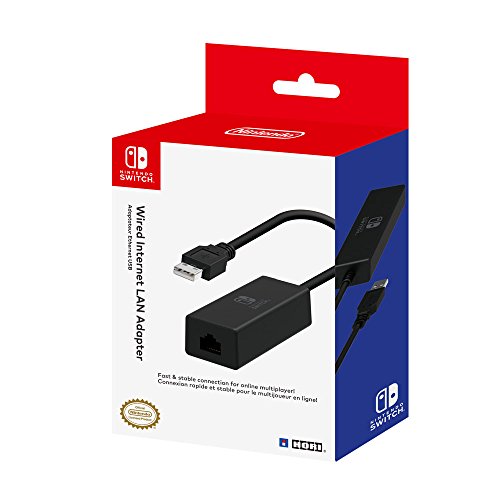 This product was mentioned in 49 comments, with an average of 3.18 upvotes

Why are people acting like the Switch not having a dedicated ethernet port is the reason for its online downfall? I figure a majority of players on any console nowadays are using WiFi connections because it's way easier for them - the only people talking about ethernet and ping are us loser fighting game enthusiasts on /r/games. Most people rely on WiFi for everything nowadays.

It's officially licensed by Nintendo. Also, it even recommends you buy one in certain games. When you launch Smash Bros multiplayer it tells you about it. And in the event that you do own a usb to ethernet plug, it does work natively

And before this, you said

>there’s no way to use a Switch wired at all

Stop moving the goalposts. Just admit you were wrong, and appreciate the new information. Goodnight!

If you buy something like this, it'll be guaranteed to work. But if you dig around a bit, you'll likely find much cheaper ones. Also you could buy an access point an get your own little wirless Network started.

I just swapped in Astral Chain after getting home from work and noticed my Switch was warm in the dock.

I use a third-party (Ugreen) network adapter.

I recall reading about this months/years ago and assumed the issue was fixed but I guess it's not as-of firmware 8.1.0.

Does the official Nintendo Switch Wired Internet LAN Adapter work any better? Or are all network adapters still broken?

1. Since I already got the HORI adapter which I believe is USB 2.0... Do you believe it is worth it for me to go and buy a USB 3.0 adapter as a replacement? Will it have any noticeable affect on my experience? I like to think I would notice the difference but I'm not sure and you seem like an expert... What say you?

2. HORI says it supports 1000BASE-T... which I was led to believe that means it can support Gigabit... yet since it is USB 2.0 and not 3.0 does this mean that HORI is simply being misleading?

To set up a wired internet connection, do I need the official nintendo usb/ethernet adapter here? [link]. I tried using one I got at radioshack a long time ago and it never appears to work when I try to set up wired internet in the menu

I will say if you're having networking issues, you won't necessarily lose connection from the eshop because it operates more like a website where everything is static until you select something whereas when playing an online game you're constantly streaming data. Do you have issues gaming or streaming say music or video on any other devices?

The simplest place to start would be just resetting your modem/router (if it was provided by your ISP it'll probably be the same device). Check the options, if you have the option for a 5G network try connecting to that. You could also try getting a wired Ethernet adapter like this one and physically connecting your Switch dock to the router. Also if you're using a router provided by your ISP it might be worth investing in your own as those ISP provided ones (especially if it's Comcast) can be complete shit.

That's the best advice I can give, but there's so many variables in networking issues that there's nothing that can be said that'll fix "Help my online games are dropping." Try resseting the modem and router. If that doesn't work start doing some research into troubleshooting networking issues in general, not just on you Switch.

I must be crazy

You can use any USB nic tbh, but just in case you wanted that official support.

It's one of those things of why not just practice on the go and hop online at home?

Why degrade the experience for everyone involved?

[link] Would definitely get the official adapter even if there are cheaper ones out there, since the recent update has been reported to have caused some issues with the third party adapters like ugreen (from what I've seen).

The pro controller is pretty good. The game comes with the 2 joycons, which are good enough for playing single player games when together. If you will play most docked and used to the Xbox controller, it seems a good idea. Carrying cases are good if you plan on getting it on a travel, car, or whatever. On general, there's smaller one's to carry only the Switch with joycons attached, games and a small place to put some extra joycons, but no dock or charger, or there's bigger one's that are more of a bag that you can carry everything.

This adapter looks like it can be used on the Dock's USB. It does not have a ethernet port itself.

All online Nintendo games for Wii U and the Switch do not work on NURes-device due to the way the firewall is configured. They should work over Ethernet; I can confirm that the Wii U works over Ethernet, it should be the same on the Switch, but no guarantees.

You'll just need an adapter like this one: [link]

You can buy an Ethernet to USB converter to play online. It doesn't cost all that much. Here's a link to Amazon:

I mean, they have 3rd party ones too, but how reliable are they?

If it's next to the modem you might as well use LAN. Nintendo makes an adapter [link] but I am using one made by Trendnet and it works just as well on the Switch as it did on my Wii U, and costs $10 less.

The Insignia one I got from Best Buy didn't work though. You might have to scour the forums to see which one works if you don't want to buy the official overpriced one.

I never got a lan adapter for the Wii U or the Wii. Will the official HORI Switch LAN adapter work for my Wii U?

I'm talking about this thing specifically, to be clear: [link]

Anyone order the LAN adapter from Amazon weeks and weeks ago and sitll hasn't had it shipped? Now it's showing as out of stock: [link]

But I ordered mine long ago. Did anyone get one successfully?

Sorry I read that question about the Ethernet but I think I forgot. It does not have one, there is a USB to Ethernet adapter though. Hey, I am glad I can help a little bit, I know what you went through, I had to wait an extra week to get mine while reading all those issues so I totally can relate.

Repost due to me not realizing the link I submitted was an affiliate link. This one isn't

You'll have to purchase a USB to ethernet adapter in order to have a wired connection. The official adapter can be found here.

Will the Wii U USB LAN adapter work for the switch, since they basically look the same? I don't want to buy a new one if the one I have works.

Small tip: You can cut off anything after the ASIN ( Amazon Standard Identification Number), resulting in [link].

This way you can be sure of not passing along any unneeded or unwanted information.

I seen this posted on a few sites however I didn't see it here so I figured I'd let everyone know. They haven't sold out yet but you never know. I might pick one up for myself just in case.

Please note that the official Nintendo Switch LAN uses the ASIX AX88179 chipset, which is basically the best one for the Switch to use and the one you should recommend. I would completely ignore the first LAN adapter you linked to, and primarily suggest the second one you linked to, or this one which is a few cents cheaper.

Not sure if you're being sarcastic, but if you're not - Link

Which Ethernet adapter is better for switch? The Hori is certified and costs more, but the other one looks more elite

Never knew it was a thing. [link]

I wonder what difference it would really make on a fiber connection.

Which network adapter should I buy? The Hori one or the one on Nintendo's website?

You can buy a Ethernet (female) to USB (male) adapter from nintendo, which plugs into the dock (link: [link])

Then, a simple USB (female) to USB-C (male) adapter will connect to that adapter, which allows you to plug it into the switch. (example: [link])

Well, I suppose I'll give it a shot. Is this adapter confirmed to work with the Switch, or should I get an officially licensed one?

Maybe a nicer case, or a power bank, a LAN adapter or a pro controller?

I have the licensed Hori LAN Adapter, I guess it’s as official as you can get. Worked perfectly right out of the box, got it from Amazon.

So I want to use an ethernet connection to play my switch online and I was wondering do I need to buy the official Ethernet USB adapter or will I be able to use any? [link]

I'm not 100% confident on this, but it might just be that the adapter is slow --- you are using a LAN adapter made for a console 2 generations ago.

And finally, explanation of base stuff

That would be worth a shot! (and free too) For sure it would fix your issue (and wired is always better for gaming). I'm not sure if they are all compatible with the Switch, but here is the official version on Amazon: [link]

And one of the suggested items showed a cheaper version as well: [link]

Sounds like an expensive fix since the LAN adapter is $26. I'd call Nintendork. Their support is stellar.

You mean the LAN Adapter? HORI is the recommended one

I ordered one of these! But the price has since gone up. :\

Yes there is an official usb to ethernet adapter for the Switch. Also from what I've seen so far, most of the generic adapters that work with Wii and Wii u will also work with the Switch such as this one.

Here's the Amazon UK link for it. Not sure about elsewhere.

There is one already. [link]

The URL says Wii U but it's the HORI Switch one.

*EDIT -- It's worth noting that anything based on the same chipset (AX88179) should work.

The Nintendo Switch ethernet Adapter. Plug it in and you'll be good to go.

edit 2: [link] $30 is still not some sort of exorbitant amount either, consoles have always been a money dump. There's laptops nowadays that don't even come with an ethernet port.

you'd think that players would like to message their friends but you're so wrong. all they wanna do is pay for a shite online sub, get frequent connection drops, enter different region lobbys aaand finally all we wanna hear from nintendo is important tips such as getting a lan cable adapter. such as this one: [link] it's just 30 bucks you chump. enjoy!

Wired connection can prevent this from happening, as much as is possible.