What is reddit's opinion of Nuun: Past Formula Electrolyte Enhanced Drink Tabs, Citrus Berry Mix, Box of 4 Tubes?
From 3.5 billion comments
As an Amazon Associate I earn from qualifying purchases. The following content includes affiliate links for which I may make a small commission at no extra cost to you should you make a purchase. 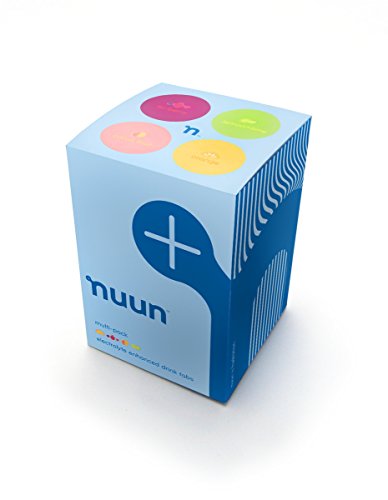 This product was mentioned in 41 comments, with an average of 1.02 upvotes

I just purchased Nuun electrolyte tablets from Amazon and have been really enjoying them. They dissolve in water like Alka-Seltzer and contain sodium, magnesium, potassium, and calcium.

I've been trying these tablets called nuun for my electrolyte intake. I just pop one in a glass of water after working out and down it. If that is what you are using the emergen c for, I would highly recommend it.

No idea on grams here, but I use the Nuun tablets. Make sure you get the old ones if you get them, the new ones have about 4g carb per tablet.

With the Gatorade, get the sugar free kind. The sugar in regular Gatorade can make the symptoms worse. Or better yet get some hydration tablets with no sugar (and no fake sugar). I used nuun tablets after retrieval: [link]

Congrats on the positive! I agree with the others - call the RE.

I ordered some Nuun tablets. I've heard they're incredibly helpful with salt/electrolyte deficits. They should arrive later today. Can't wait!

I was having a lot of trouble getting my electrolytes in, so I caved and bought Nuun electrolyte tablets. I frickin' love them -- they're delicious, 1g carbs & 8 kcal apiece, and have fixed the fatigue, muscle pains, depression, and headaches I was getting after my first week of keto this go-around.

The headaches are horrible. One thing that has helped me with headaches, even from caffeine withdrawal is electrolyte tabs.

I get horrible headaches after running, so I started using the tabs first for that. But when I cut down caffeine, I've used them also and they seem to help. These are the ones I like -> [link]

My Dr. told me that without having kidney disease or some similar issue that it's not even possible to develop hyperkalemia from food. Your kidneys will take care of excess potassium. With Spironolactone, the main thing to worry about is dehydration. Make sure to drink plenty of water but not too much water as that can lower your sodium. Keep something like nunn electrolyte tablets on hand for that. Also, pickles are awesome.

Low potassium is almost always the cause of leg/foot cramping. It can be so severe you can barely stand. Get the salt substitute made of potassium, drink bouillon broth. Smart water, expensive but wonderful, and what I now use the most is Nuun from Amazon. [link]

After a good jog or long walk Nuun Tabs seem to do the trick. I use two in a 20oz bottle of water.

This is exactly it. I had the same problem. I throw a nuun in a litre of water and usually get through the whole thing before my workout is done. I haven't felt any dizziness or drop in energy since.

EDIT: Added link; I prefer nuun to gatorade because a) it's cheaper per litre and b) it doesn't have all the garbage sugar of gatorade.

I make sure I have a bit of healthy sugar in my body before a workout, and will eat after to maintain a healthy blood sugar level.

What /u/anbeav said. Electrolytes are very important. I grabbed a box of NUUN before I started and, while I had a wee bit of fatigue and only one or two very minor instances of a headache, I think they've done a great job of keeping the keto-flu at bay.

These tablets have really good ratings on Amazon and I think I am going to order some now! Thanks for the idea.

Nuun is basically the same thing with a slightly lower cost per serving at the prices on the manufacturer sites.

You can also get Nuun on Amazon for as little as $0.36/serving (and free shipping with Prime).

I'm looking into going on a ~800mi tour at the end of August and I was just wondering how you performance was? Did you take and electrolyte supplements or eat on the saddle?

I was thinking of just taking jerky and almonds on the road with me for the times in between towns. I also worry about electrolytes cause I enjoy not dying (I found these which seem promising).

Any information would be wonderful, this is the post I have been waiting for, thanks! =D

I have read around here on the FAQ that upon entering a state of Ketosis you dump sodium and uric acid like mad. If I am not mistaken, it is the Uric Acid that gives urine it's color.

I dump some NOSALT (potassium chloride)as well as regular Sea Salt into my water and found I had to up the amount beyond what seemed sane. I was getting weak and getting muscle cramps in my feet from electrolyte depletion.

If you start feeling shaky and getting cramps - start upping your Sodium , Potassium and Magnesium. THESE are suggested

I purchase nuun electrolyte tablets on Amazon and they do the trick also!

I thought I was crazy... I used to use NUUN on Whole 30, so I knew there used to be no dextrose. You can still get the old formula on amazon. NUUN Past Formula

Is that this stuff? Tablets?

Thanks! I already have a couple boxes of sugar-free Nuun so it would be easy for me to pop a couple of those on fasting days.

Nuun is my go-to. Tastes a bit like sparkling water and gets the job done.

I got some Nuun tablets and some Lite Salt (it has potassium with sodium). It helped.

I started taking one of these before bed and right after waking up for the past 2 weeks and I believe I no longer feel thirsty like I did?

I ordered these after I saw it on this website [link]

I also use nuun and love it. Great for anytime and come in easy-to-carry tubed with pop-tops.

Note sure where you live, but since you said you will be going from GA, Atlanta has a lot of nice used bike places if you want to get soemthing on the cheap.

*Beltline Bicycles - This guy buys old classic road bikes, fixes em up, and sells them for a really good price. Think about $300-500 bones. Give em a call and see what they have.

*GA Tech Starter Bike Program - I just ran into this webpage doing a few quick google searches. This also might help, and is in atlanta.

*Sopo Bicycle Cooperative - This is an awesome concept. I haven't volunteered for their events, but sometimes they host volumteers to tear down bikes so that students at summer camps can learn how to put them together. But they also sell used components and i believe maybe even bikes for suggested donations.

Now, for nutrition/hydration while on your ride:

Also, you can check out /r/cycling as well since i'm sure their sidebar probably has some good tips for those newer to cycling.

It might also help to notify the local authorities that you plan to have a long bike ride come through their towns. I've never set one up, but the concept of having as many people know that there will be a large group of cyclists on the road can't hurt.

Best of luck on your ride and I hope fund raiser goes great!

I have had a lot of success with Nuun Active Hydration tablets. They're basically gatorade but without all the sugar. $18 for 48 tablets on amazon.

Perhaps having her read this thread on eplaya would be helpful: [link]

Many experienced burners in that thread talk about taking multiple liters of water with them plus an extra gallon jug on their bike.

They're flavored and have lots of electrolytes. I prefer those ones specifically, but there are other options out there.

Worst case, make sure her bike has a basket on it so you can throw a gallon jug of water in it.

I've been using nuun tablets, and they seem to take care of this problem.

Nuun tablets. I mix them with Mio for better flavor.

Mesh jacket, avoid black. I wore a Joe Rocket Phoenix in grey last summer, never got much above 43-ish, but 85-95% humidity is common here, I'd much rather have a few degrees hotter if it were dry. Sucks when you're stopped, sucks when you're going a bit less. White and/or silver would have been better than grey and black, but that's not exactly rocket surgery to figure out.

You're going to be pouring sweat, so hydration is a must. CamelBak it up, and get some electrolyte tabs to help keep your salt levels up. I like those because they're reasonably lightly flavored, and low on calories. I find em more refreshing than something like Gatorade.

Get some of these for your water:

Even these will work:

You will feel much better at the end of the night because you've maintained proper electrolyte levels.

If you drink alcohol try to alternate between it and a drink with electrolytes. Water will help prevent hangovers, but the electrolytes really keep you up and moving.

I love nuun hydration tablets. It's like gatorade, but without the sugar or weird artificial sweetener taste. They have have maybe a third of a gram of sodium each along with other electrolytes.

I ended up getting pretty fatigued last week. I woke u pand could barely walk down the stairs. I bought some of these - [link]

Best thing ever. Good source of your electrolytes. Dissolve them in your water bottles and you'll kill 2 birds with 1 stone. Hydration and electrolytes.