What is reddit's opinion of OBITSU Assembly Action Figure and Doll Stand - Multi Clear Transparent Stand?
From 3.5 billion comments
As an Amazon Associate I earn from qualifying purchases. The following content includes affiliate links for which I may make a small commission at no extra cost to you should you make a purchase. 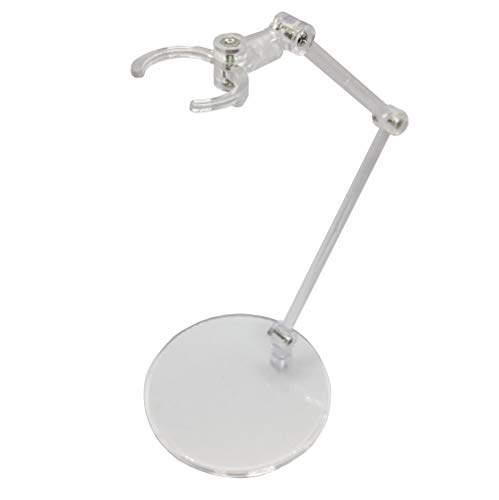 This product was mentioned in 28 comments, with an average of 1.71 upvotes

The one I use is called the Obitsu Clear Body stand which you can find on Amazon. It's very modular but it comes in pieces so you'll have to screw it together. It's even sturdy enough to hold Venom up in the air though I probably wouldn't leave it like that indefinitely. Here's the link: Obitsu Body Clear Stand [link]

no, this is actually an obitsu stand from Amazon. I have several of these, and they work great.

I do have a few neca stands as well, but I prefer these since they are less bulky

You know, we saw him for ages at Barnes and Noble but for once, they didn't have him when I went the other day. Though he's more expensive there unless I get another great coupon like they send me sometimes. I'll probably just save my pennies and order him from Amazon again whenever I'm ready. Cause yeah, I love the armored Trunks and then he can match dear old dad.

Hmm...I think if I could find the bootlegs, the nicer ones like he's got, for a cheap enough price I'd snatch them both up. They could be really useful for making the move into my own original works, or even more original pictures based on existing characters. And...I never would have thought of Pledge for joints. LOL That's clever.

I did end up ordering a stand for Vegeta since he didn't come with one already and I knew that I didn't want to be restricted to positions where he could hold himself up. This one took a decent bit of construction but so far I like it. It's holding him up above the Persona and Zelda crew very well and has a bunch of attachments to change how it holds the figures. Even has the peg ones I imagine could be use with the Figmas. For $9, not a bad purchase at all and I'd definitely get another for Trunks.

Crossing my fingers they come out with a Persona 5 protag one at some point, even though they've only just come out with/put up for preorder the Persona 3 protag. But yeah...I need the new guy to go along with Yu. And if they made a Morgana Nendoroid I would scoop it up in an instant.

Okay. Do you have a link to one of those, or a title I can search for in amazon?

The cheapest I could find for a display stand was this, but I'd prefer something more compact that directly connects to Spyro, like a two-headed claw.

The ones I like to use are Obitsu Stands. You get a pack of five from $25 on Amazon. Unfortunately with everything going on, it will take a while for Amazon so ship them out. Heavier figures might take two stands, but they are able to support a surprisingly amount of weight.

I use the OBITSU Assembly Stands Link: [link]

For the underneath, I 3D printed “holders” I’ve screwed in. Lmk if you want the file! I’ve been meaning to upload it to Thingiverse for while now 😅

For Darth Vader this shit works perfectly. You can even manage to get it posed in the air (barely).

For gaogaigar, I got nothing. His proportions are too off to work with normal display stands and his body is so heavy that a plastic stand won't work anyway. Someone please correct me if I'm wrong because I would love a stand that could hold him up.

I found this one.

I don't know how good it is, since I don't personally own it. I'll probably end up buying one next week and let you know if it's any good or not.

The problem with Transformer posing is that many of them have balance issues when trying to get into crazier poses. So you can purchase action figure stands like these to help create amazing looking shelves full of figures.

How big is your display box? How big is the Figure?

or something similar. usually pretty cheap and easy to assemble, could be your alternative to something like tack. and you wouldnt have to worry about any sort of damage from chemicals

It doesn't really match any of the other Black Series stands at all, but I use this on my Grievous and have absolutely no complaints with it.

This is the kind of stands that I use!

Most of them are Tamashii Stands and some are Obitsu. Available on Amazon/eBay.

Obitsu stands are my favorite - [link]

If you order a lot maybe order them from AmiAmi instead. Shipping is more expensive than Amazon, but the product is cheaper IIRC.

Falcon is on a mezco stand, but I got the stands for War Machine and Rescue from Amazon.

This one to be specific. [link]

Obitsu stands are great for most 6-7 inch figures, here’s a link to Amazon Australia but you could probably get them for less on eBay: [link]

Obitsu Stands. Says it's for 1/6th but works perfectly for 1/12. It's on amazon too but a bit more expensive.

Those would be multiples of these put together. Obitsu Body Clear Stand [link]

They work pretty well in my experience.

I’ve always liked the clear dynamic style stands that come with a lot of Japanese figures. They can be expensive, but you can pose your figures anyway you want with them.

Eh, dont think ill get him. Way to pricey. Just an idea but maybe you could have a stand on a wall, like this one [link]

Glue it on the wall or just make it stick somehow. And out a flying character on it. Heres a quick 1 minute sketch. [link]

It's this one. I had 2 of them so I just combined some parts to make the stand with multiple arms.

I use Obitsu stands. Fits pretty well with HGs if you shave down the peg a smidge. Amazon.ca link

I have a couple of these [link] but with double clamps. Would buy again.

Ooo where'd you get that stand!? I need to do what you did!

Since you wanted to try and get technical. That is for one stand, in the US. The Bandai's are a 3pack.

You can't find the Obitsu's for $3 shipped in the states.