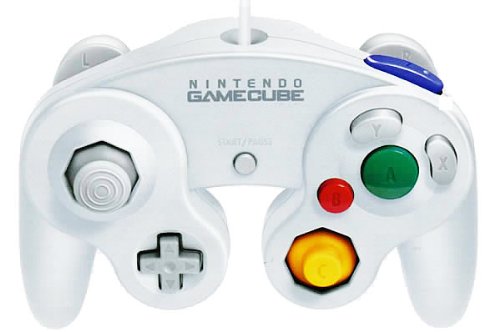 This product was mentioned in 29 comments, with an average of 1.00 upvotes

Hey all, I just purchased two of these, and so far I strongly prefer them to the Wii U controllers. However, both seem to have a problem with inputting a slight right input at times. I've noticed it when short hop reverse lasering with Falco (when I short hop there'll be times when he will only shoot right, even if I flick left before pressing B). My brother noticed the same thing with his Picachu up-B's.

Is this common? Do they simply need time to "break in"?

These things are discontinued now and are like gold - definitely would be super meaningful to any serious smasher. They were manufactured from 2008 up until right before the smash 4 era, so most of the people in the scene now came up on these as their first "serious" controllers, making them particularly sworn by and beloved.

That or a good condition (sticks aren't too loose/stick rubber is still intact) original run controller - maybe a funky color like a spice orange or emerald blue one (japan exclusive so not commonly seen!) if you wanted to get fancy but the difference is purely cosmetic and they're all great. These controllers are known for their smooth triggers and are much less commonplace these days at tournaments. Finding one in good condition and putting it into the hands of a serious smasher who will take care of it could be considered somewhat of a moral good :P

Before sm4sh came out, the original white japanese controllers would go for about $30, and they're actually the best gamecube controllers you can buy (I have one and can attest to this), but now they go for up to $65, so get that one if you're willing to shell out some money, but want the best possible controller.

Okay man thanks a lot! one last question tho, what about this controller ? It's really expensive, I was wondering if the quality is different, or if the one you've linked me is durable in comparison to this one.

I bought that exact white sm4sh controller months ago and I returned it because the controller's texture felt weird on my hands. I think they used a different paint finish than this controller.

I think the sm4sh controller has more of a grainy texture than a glossy, smooth texture that the OG white's have.

Have you noticed this too?

You can't beat official controllers! I bought two of these off Amazon, and have been using them for nearly a year now. The cords are twice as long as the original release controllers which are nice, haha.

There is literally no advantage of getting a gamecube over a wii (except price :P), yes you need a crt, if it's not that there will be input lag, you need a controller (not a el cheapo one either, get a legit nintendo one (sm4sh ones work too but the absolute best is [link])

Open it up and see if you can fix it.

If not I recommend this one: [link]

yeah I'm getting this controller [link]

Cause I heard it was a lot better for "getting serious" about playing melee. That and most of my controllers have being destroyed by friends.

Thanks a ton for all your help!

I picked up this to play Gamecube games on my Wii. It's got a longer cord than the original Gamecube controllers and is the Japanese version but will work on any Wii / Gamecube.

Also don't forget to get a memory card! Can't use the Wii's memory to save the Gamecube games.

You got her a gamestop controller? You must really hate her. Those things break after like, 2 days of use, and barely work in the first place. You can get new classic gamecube controllers on amazon.

Amazon has official GameCube controllers for $30. It's worth the investment if you intend on playing any N64 games and obviously GCN games.

Gotta get first party controllers man. They're well worth the price.

Good adapter, but most would agree you need first party controllers. [link]

The affordable ones are used, and take a long time to ship, but they have good reviews.

Expensive? Yes. Is it worth the price? Every fucking penny dude.

Yes its expensive, but trust me if your trying to play melee seriously this is the way to go.

Thanks for pointing that out, I couldn't find a smash bros one for less than $70 on ebay. I was really looking for this one though

I just use [link] with [link] because it works a lot better and supports both my Wii U and PC.

You're thinking of the Japanese white gamecube controllers probably

wish they'd make another batch of these, i'd STOCK UP this time if they went on sale

Nope. I'm gonna try doing it from scratch again. Does any controller work? [link] I know its a longshot but I'm getting kind of desperate

Here and here are your cheapest options (on amazon at least) for new first-party GC controllers.

Why not buy a legit gamecube controller? Seems worth it for the collection.

That being said, nice collection. Been a while since I have seen one of the original Xbox controllers.

My recommendation would be that Amazon sells new GC controllers.

My old ones all went to shit after too much use as well.

If you wanna spend a little extra money, these are the real deal.

Here are some links for the product in the above comment for different countries:

This bot is currently in testing so let me know what you think by voting (or commenting). The thread for feature requests can be found here.

I could do this and I wouldn't. Those Amiibos are such a waste, could have funded more games. Early reports are saying these new Gamecube controllers are poorer in quality than the originals, which you can still buy brand new for the same price, less if you look around further.