What is reddit's opinion of OIKWAN Cisco Console Cable USB to RJ45 Console Cable with FTDI chip Compatible with Cisco, Huawei,HP,Arista,NETGEAR, Ubiquity, LINKSYS, TP-Link Routers/Switches for Laptops in Windows, Mac, Linux?
From 3.5 billion comments
As an Amazon Associate I earn from qualifying purchases. The following content includes affiliate links for which I may make a small commission at no extra cost to you should you make a purchase. 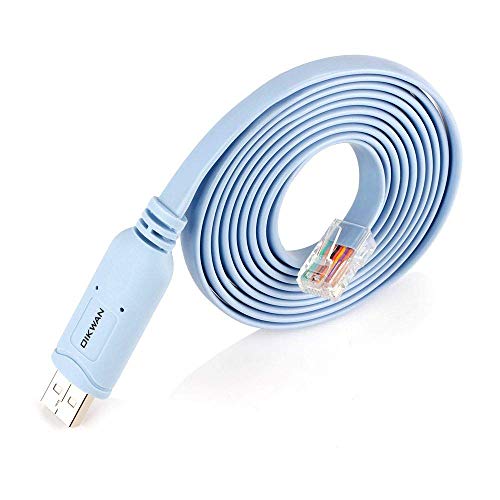 This product was mentioned in 6 comments, with an average of 2.33 upvotes

The jibberish I’ve seen from console that looks like that was related to the console cable.

This is my cable of choice:

You can skip the USB-serial adapters now, they have USB console cables available.

I still have a serial adapter, along with many dozen serial console cables... from back when Cisco included a console cable with EVERY switch.

very good suggestions, but i buy these CHEAP little dudes in bulk and leave them at every site with the equipment lol (and i ship them with the equipment when we got remote hands). ive had _zero_ problems with drivers on windows7/8/10/linux.

Thanks again for the help!

The console assignment worked just fine via the serial interface. The $10 cable from Amazon worked perfectly.

Installing the new box was as simple as shutting it down, swapping the cables to their new ports, powering up, and rebooting the cable modem. Pretty easy once I rebooted it, finally got it to let me login, and realized that the web interface was so slow because we hadn't accepted the new license/usage terms.

No. The console port is a serial connection, not an Ethernet connection.

Personally, since 99% of the equipment I use takes an 8P8C* console cable (and not an actual DE-9† connector cable), I use something like this DE-9 to 8P8C cable. The specific one I purchased 7 years ago apparantly isn't a valid link on Amazon anymore, but it looks exactly like this one.

The one I purchased has a (genuine) FTDI chipset, it works without drivers, and it keeps the same COM port number each time I plug it in, no matter which USB port I use.

And if course, I broke the clip off the 8P8C connector, because sometimes it's hard enough getting it in the console port, I want to be able to just give it a yank when I'm done.

On the off chance that I connect to equipment that has a DE-9 connector, I have some random no-name DE-9 to USB adapter and associated drivers. But that's like.... Once every other year.