What is reddit's opinion of Ontario Knife 7-7 OH77 fixed blade,hunting knife,outdoor,camping, 7-1/4 in x 11.81 in L, Brown?
From 3.5 billion comments
Created by @mouseofleaves.
As an Amazon Associate I earn from qualifying purchases. 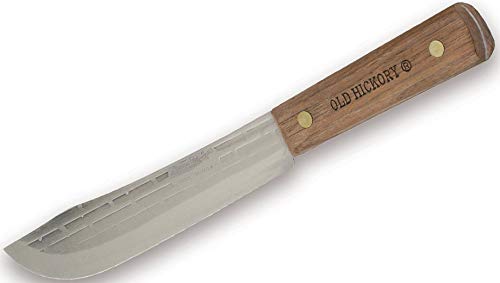 This product was mentioned in 6 comments, with an average of 0.83 upvotes

Picked up an Old Hickory on Amazon for all of $11, because why not.

The handle is crap, the factory edge was horrid, and the tip was completely blunt - it was purposely not ground and left at the same thickness as the spine. Actually all of the grinds were terrible!

However, its 1095 steel with a good enough heat treatment that the edge holds reasonably well while also being soft enough to not chip after cutting through chicken bones. Like I took the spine out of a chicken using a knife instead of shears just to test the knife.

After about 5 minutes on a 220 stone followed by a progression 2000 (and 5000 for bits of the face) the knife had a working tip and a whole lot of ~~ugly~~ character building scratches.

It looks like the same ol' shitty handle that every youtuber who's ever really abused the knife has had to replace.

Mine was in the $11 ballpark, but it never made it into /r/just_Buy_A_Mora/ because the Mora Companion blows it away in value right out of the box.

If you're going to make a custom knife via stock removal without heat-treating, I suppose an Old Hickory at $11 is probably as good a carbon steel blank as you could find, (some disassembly required.)

Old Hickory for less than $10

It's pretty decent but I'd highly recommend an old hickory instead. Google around and you'll see many share my opinion.

If you end up getting that and need a sheath, it actually fits perfectly in a standard KA-BAR sheath.