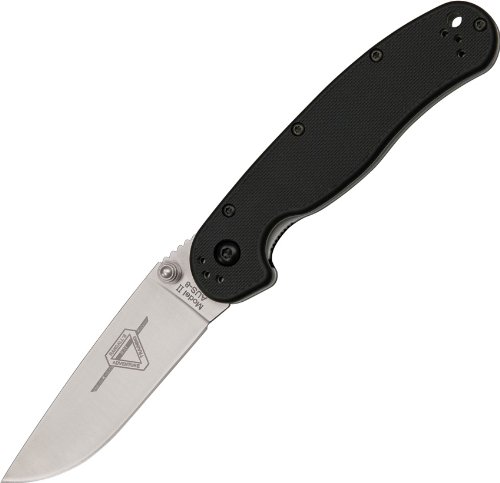 This product was mentioned in 18 comments, with an average of 1.67 upvotes

>a 3-inch blade is pretty small compared to other knives, except for the ones the children can use.

that's not really accurate. it's pretty much the most common size for a folding knife actually; in many states a folding knife with a blade over 3" can be considered a concealed weapon. plus, big knives are harder/heavier to carry and have no real use for the 'extra' length to justify the annoyance of carrying it. most adults who carry knives around with them (there are legit reasons) would have one of around this size.

the official BSA knife is 2.75". so is the one i have on my desk right now, which I'm sure many thousands of adults carry around.

Well let's not be rash.

If you really can only afford one, it has to hold up. Maybe the fixed blade is already assumed, and it's just a question of comfortable discrete carry.

You could modify a sheath to be an inside-the-waistband, deep-carry type. So long as it was comfortable and safe you'd have it all.

If that won't work than a tough cheap folder is what you want. Maybe an ontario rat?

I've had problems with the torsion bar of the cryo snapping after about a month. For that price/size I think the ontario rat 2 is a better buy, but of course that all depends on your preference.

Someone on /r/knifeclub suggested this ontario rat 2 and I use that most often if I'm outside. I also have some cheapo walmart sheffield folders on my kitchen counter that I use even more often, for opening boxes and general inside tasks. I don't carry a knife on me because they aren't allowed at work...so I just have them laying around and grab whatever one is closest

re: thumbstuds. That is where I give cold steel a nod, they make theirs removable, so when putting on a clamp style sharpener you can remove them so they do not get in the way.

But I agree with all this. Honestly, as well a great EDC blade for a low price in your budget that will serve you well, is an Ontario Rat II. They can be had for about $30 - $40 and are amazing budget blades. They are not assisted, but the deployment with the thumbstud are amazing. Well worth a try to purchase one. [link]

I picked up an Ontario Rat Model 2 recently and have been pretty impressed by it. It's pretty thin, clip is black so it goes well with black dress pants and seems pretty well built. I had a Cyro and liked it too but it's gone missing at the moment. The Rat is lighter too. Amazon appears to have no stock themselves at the moment so a 3rd party has come in and jacked up the price. I got mine for about $26 [link]

This is a great cheap one handed option: [link]

Should I jump on it? [link]

There's also the Opinel Carbon series of knives which I hear nothing but great things about (and am actually about to buy myself an Opinel No 6 soon).

Ontario Rat is a good durable knife that's probably in your price range (Prices vary from country to country so its hard to say).

Buy this, you wont be disappointed. One of the best values out there: [link]

Under 25 bucks is tough but I might look at the RAT-II or the Kershaw Chill. Both great for the money.

To go through some of the recommendations in this thread:

Benchmade is out based on price. The Leatherman is out on price and sleek-factor. Opinel and Buck qualify on price, but few would consider either to be sleek. CRKT is simply not BIFL. Some people really like them, but I have handled them and I know people who have had them break during reasonable use.

You could get the Spyderco Tenacious at $35, but again, not really sleek. With the Kershaw selection you are beginning to get a couple of hits. I would look at the $40 Leek, or the $20 Chill. There are other models from Kershaw in between those two price points. I don't like the assisted open feature on the Leek because it is a bit of a weak point, but not a big deal, and Kershaw will replace it for you if it does break.

Having said all of that, here is another recommendation from left field: SanRenMu. They are Chinese made and are surprisingly good. Here is one of their sleeker models. Well inside your price point and very well made.

Edit: I forgot about the Ontario Rat 2, because I haven't actually owned one before. Still, people who know knives love them and they are the right price. I'll leave you to judge the sleekness of them.

Edit 2: the Kershaw Skyline has dropped in price and is now a viable option for you.

I tend to lose things like flashlights and pocket knives so I attempted to get the best and cheapest. I want everything to fit in my pockets without trouble.

In my right pocket I keep my keys, knife, and flashlight. I got tired of using a lanyard with my badge so I came up with this novel solution of displaying my badge. When not at work I simply put it all in my pocket.

I have a push button ignition on my car, I doubt this would work as well with a standard key.

I keep my SMPL mod in my watch pocket. The best feature of this mod is that it fits perfectly in your watch pocket. With a Derringer mod, only the drip tip pokes out, the freakshow mini not so much I keep ejuice bottle and my Nexus 5 in this pocket as well.

Not pictured is my wallet and space pen which I put in my back right pocket. Occasionally I'll carry a hanky in my left pocket.

Note: Links are where I bought the products from and is in no way an endorsement of the seller

Without question the best knife $25 can get you. The knife in OP's hand is a Gerber ripoff of a CRKT M16-10KZ. And when I say ripoff, I mean BLATANT ripoff.

I used a CRKT M16-10KZ for a very long time, then I decided I'd upgrade to that Ontario Rat II, and it's amazing how much you get for such a slight price increase.

Seriously, if you want an inexpensive knife, get the Ontario Rat II.

The knives I always recommend under $100:

I own both and actually carry the Ontario RAT II more often just because it's a cheap-ish knife I feel comfortable abusing. The Benchmade is extremely high quality and super fun to play with.