What is reddit's opinion of Openwheeler Advanced Racing Seat Driving Simulator Gaming Chair with Gear Shifter Mount [Playstation4]?
From 3.5 billion comments
Created by @mouseofleaves.
As an Amazon Associate I earn from qualifying purchases. 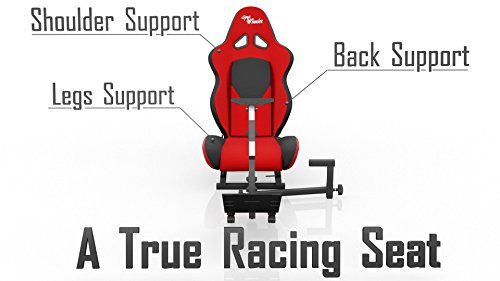 This product was mentioned in 4 comments, with an average of 1.25 upvotes

I use the "OpenWheeler Advanced Racing Seat", which does let you remove the steering wheel and mount a HOTAS if you want.

I can't say how it holds up to its competition as it's the only racing seat I've ever owned, but it's very adjustable and works well for what I use it for. Only thing I couldn't do was reverse the position of my pedals (for rally racing), but in no way has it been a deal breaker. I use a gear shifter with mine and it took some elbow grease to secure it tight enough so that it doesn't wobble during use, but again, no significant complaints considering the price point it's at. I've had mine right around 1 year.

It was available in different colors at the time I bought mine. It says unavailable in the U.K. for some reason (which is odd to me since the company is U.K. based afaik). I still see a few other similarly priced products though that look as good or better than mine.

Edit: Mine does have the center column which was off-putting at first, but hasn't proved to be an issue either. Still, if I were re-buying, I'd get one without that.

They were on sale the other day but I don't know how I would attach it to my setup. I use a Openwheeler chair with a G29 setup + shifter.

Would the mount for the Fanatek shifter work with the handbrake? I am aware I would have to get the USB adapter as well.

Yep I've seen a lot of negative talk about the brake pedal but I love mine and haven't adjusted it. It also helps prevent me from slamming the brakes fully every time I want to slow down.

BUT I will say I use an open wheeler chair so it's easy for me to really push down on that pedal without slipping or anything.

Awesome, comfortable chair. Just wish it wasnt so low to the ground.