What is reddit's opinion of Ordinary Men: Reserve Police Battalion 101 and the Final Solution in Poland?
From 3.5 billion comments
As an Amazon Associate I earn from qualifying purchases. 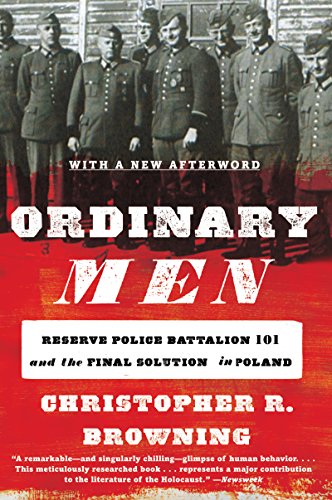 This product was mentioned in 15 comments, with an average of 25.93 upvotes

In college while pursuing my degree in sociology one of my professors assigned the book Ordinary Men: Reserve Police Battalion 101 it was one of the most powerful books I have ever read. It does not justify their actions but gives perspective on what it takes to make a human go down that path. It explores the societal pressures, views and violence from within. It was not an easy read by any means but it was very thought provoking.

I recently read "Ordinary Men" about how normal polish police went from being civilian normal police to aiding the Germans in the Holocaust and it's scary how many parallels there are. It requires normal civilians and police to all step up and speak against it to stop

Edit: comrade pointed out these were German civilians. They are correct.

"Browning argues that most of the men of RPB 101 were not fanatical Nazis but, rather, ordinary middle-aged, working-class men who committed these atrocities out of a mixture of motives, including the group dynamics of conformity, deference to authority, role adaptation, and the altering of moral norms to justify their actions. Very quickly three groups emerged within the battalion: a core of eager killers, a plurality who carried out their duties reliably but without initiative, and a small minority who evaded participation in the acts of killing without diminishing the murderous efficiency of the battalion whatsoever."

A big thing that struck me: when the police who initially said "no" in front of the rest of the group were later asked how they were able to say no they talked about how they were older and financially independent. The young guys all said yes because they were focused on their careers and hoping for a promotion. I wonder how much of the same mindset controls our police in this country. If the chief of police is smiling at militia run check points, is the 24 year old cop ready, mentally but financially, to question him?

This entire post misses the mark. We're not calling them to arms, we're mocking them and pointing out their against tyranny stance has no litmus test they will actually apply. Their use of guns is partisan. This is the predicted step we all knew was coming: right wing support for police will be support for the gestapo as long as gestapo target their political enemies.

I recently read "ordinary men". Polish authorities interviewed polish police that aided the Germans in the Holocaust for ten years. Between those interviews and police documents we can see how ordinary law enforcement are coerced into aiding genocide. It's horrifying how familiar reading all that stuff is into today's light. I'm not saying genocide will occur but law enforcement mentality towards everything occuring is wrong. The mentality they are breeding is primed for dark things

The interesting thing about the holocaust, especially in Poland, is that all the senseless killing was the culmination of centuries of racial prejudice. Non-Jewish Poles were greenlit to take life and property in the same way white Georgians were during Andrew Jackson's tenure in America. The point is, Hitler didn't wave a magical wand to make people start murdering. Nor did he send in droves of SS agents to conduct slaughter. Much of the killing occurred organically.

I haven't read it yet, but this book is on my reading list: [link]

It was recommended as a good resource for understanding the answer to your question.

They are brainwashed, pure and simple. Pretty easy to do, too:

I think working for "news" organisations that are more propaganda than news chips away at your morals and world view bit by bit. Every day you're just a little more comfortable with the bullshit you (and everyone else at that media company) are putting out.

I read Ordinary Men: Reserve Police Battalion 101 and the Final Solution in Poland last year, and it was extremely eye opening and confronting. It's all about the reserve police battalion 101, basically normal small town police who weren't swept up in the German propaganda, and were initially unwilling to commit those horrible acts (like mass murder) but it slowly became normalised and they became more willing and used to it all over time. Some even enjoyed it, and they became more brutal and horrific over time.

> Christopher R. Browning’s shocking account of how a unit of average middle-aged Germans became the cold-blooded murderers of tens of thousands of Jews—now with a new afterword and additional photographs.

> Ordinary Men is the true story of Reserve Police Battalion 101 of the German Order Police, which was responsible for mass shootings as well as round-ups of Jewish people for deportation to Nazi death camps in Poland in 1942. Browning argues that most of the men of RPB 101 were not fanatical Nazis but, rather, ordinary middle-aged, working-class men who committed these atrocities out of a mixture of motives, including the group dynamics of conformity, deference to authority, role adaptation, and the altering of moral norms to justify their actions. Very quickly three groups emerged within the battalion: a core of eager killers, a plurality who carried out their duties reliably but without initiative, and a small minority who evaded participation in the acts of killing without diminishing the murderous efficiency of the battalion whatsoever.

> While this book discusses a specific Reserve Unit during WWII, the general argument Browning makes is that most people succumb to the pressures of a group setting and commit actions they would never do of their own volition.

It felt extremely relevant to modern issues with the police brutality in America last year, and I think there's probably a similar mentality in Newscorp and other propaganda outlets. They start by pushing the line on what's ok, introducing more opinion than real news, muddying the waters on issues like climate change, not holding the government to account because it's 'their team' and over time it becomes so normalised and shifts their morals, that they push the line further and further and get more detached from facts and reality.

It's never a case of one day just snapping or deciding "I'm going to lie and print this bullshit that is harmful to society and democracy" it's all the little steps towards that, gradually over time. It's not such a big thing when you're pushing the envelope just a little or inserting a bit more misleading opinion and omitting a few facts that would undermine your argument. But then you go a little further the next day, and the next, and the next, and suddenly you're parroting the same shit as Alan Jones or whoever else that you would have disagreed with or mocked as 'not real news/journalism' a few years ago. And trying to justify it by saying 'I'm not as bad as Fox News/Sky News, so it's ok' and it's especially easy to justify it or feel like what you're doing is ok when nearly the entire media ecosystem is on the same side as you, like in Australia. If all your colleagues, and everyone over at the other major newspapers are doing it too, surely it's ok right? And you definitely don't want to be called out as a lefty/greenie or get cut off from your sources in government for holding them to account or not pushing the company line.

Archives for the links in comments:

> they don't fight for their country, but for the person beside them.

Yeah, well, that is the basic premise of this book.

> You have to be mentally ill to be antisemitic to a degree of violent behavior. No entirely sane person would be.

> It's not exactly a plan that makes me think a sane person came up with it. At least in America, it's incredibly unlikely a not guilty by reason of mental disease or defect claim would fly though.

No mental illness is required.
[link]

I think we've maybe talked past each other. I meant that participating in the invasion and military action part was forced, and that those who participated in the military part weren't complicit in the civilian murder.

If you're interested in stuff like the paper you linked, although you've probably already read it, I recommend the book Ordinary Men: Reserve Police Battalion 101 and the Final Solution in Poland. Which follows a police battalion who were made up of ordinary people, so none military men most who were middle aged, pulled from various industries in Germany to execute the final solution in Poland and how many of them went along with it.