What is reddit's opinion of OREI Digital to Analog Audio Converter - Optical SPDIF/Coaxial to RCA L/R with 3.5mm Jack Support Headphone/Speaker Output DA21?
From 3.5 billion comments
As an Amazon Associate I earn from qualifying purchases. The following content includes affiliate links for which I may make a small commission at no extra cost to you should you make a purchase. 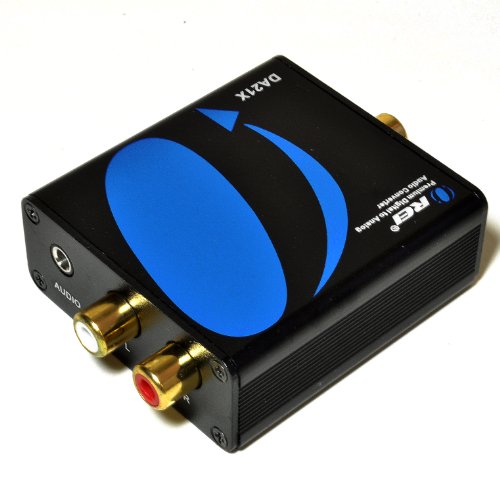 This product was mentioned in 33 comments, with an average of 1.12 upvotes

I use an Optcial DAC on my PS4 and Xbox One. Plug this into a headphone/passive speaker amp or powered speakers over 3.5mm, and you're good to go.

There are many cheap ones, so many it’s hard to know where to begin. Here’s an example - Amazon. They show an image where digital audio goes into the DAC (or a Blu-ray player in your case) and analog audio goes out to powered speakers. Whichever one you choose, check to see that it comes with a power plug. Some of them don’t, so you’d need to buy one separately.

My guess is that people either don't really notice the latency, or they have a very good low-latency DAC on their receiver. I picked up RS as a way to try and get back into guitar/bass. Early on, it seemed to work fine. But as the game added more and more notes into the mix the latency became more apparent.

I tried a few different specialized DAC units as well to try to further minimize the latency. I got the best results out of this one. If I run the output signal through an all-analog speaker, it's playable for RB vocals - there's delay, but not quite enough to be distracting IMO. I honestly do not remember if it did the trick for RS. My purchase history shows another DAC bought a year later that I don't even remember testing.

Of course the downside here is that there's another box in your rig that is probably not needed for anything but rhythm gaming.

You're never going to get the sync right trying to listen on the laptop and watch on the PC.

What you want is an optical-to-3.5mm converter like this one. Run the optical from your TV out through that.

>Unless the dac is a nos dac (which behaves like a broken dac actually), it can't. Actually an amp is many times more likely to affect sound than a dac.

Some extremely garbage DACs either by poor design or budget constraints can sound different. For example the this DAC's frequency response increases significantly at ~~high frequencies (>~12khz). I assume this is due to an extremely bad filter (it also has very bad aliasing).~~ from sub 10hz to around 2k by 30db.

Some (often rather expensive) DACs made by near unknown companies have similar characteristics, or extremely high distortion, more often IMD than HD.

this is the one i bought [link]

Comments say that it will get split audio so i will try it out paired with a portable headphone amplifier i have by FiiO and have the other audio output going to my soundbar. If the sound quality sucks i think i might get a nicer one like you have got.

I should add that i contacted samsung live support and they said that i can only get dual audio with bluetooth headphones, i find that hard to believe when there is all types of A/V equipment out here. They could have atleast figured out what to suggest to people if they wanted to cheap out on this feature lol. i dont want a damn bluetooth headset that needs batterys.

You can get an active converter to take optical sound and convert it to analog 3.5mm. That's probably the cheapest option, fixing the HDMI in on a TV would be considerably more in both parts and labor.

Can't say I'm an audiophile, but I've been using this for my xb1 since I got it last year. [link]

Works great with my old Logitech Z-5300e speakers, haven't noticed any background noise, and sound comes in loud and clear.

Get an Optical audio cable, attach it to a digital to analog converter Here's one, plug in any headphones.

Edit: Bonus, that one comes with a optical audio cable.

You need a digital-to-analog converter though.

This gets you audio. For chat you'll need the adapter.

There may be other combinations that work with the new controller, but this is how I got my X32's to work on Day One.

Elsewhere someone said I could use a SPDIF to 3.5mm converter. Something like this: [link]

Would that work too?

EDIT: Do you think a converter like this would be interchangeable with a receiver in your examples?

Hi, I recently purchased a used pair of Sennheiser HD 650s (6.3mm jack). It didn't come with the Sennheiser 6.3mm to 3.5mm because I bought the headphones used. I have a Fiio E11 (3.5mm jacks) and some random DAC [link] (I have no idea what I am doing lol). I've been listening to my headphones by plugging them into the soundsystem I have with my TV (it accepts 6.3mm jacks) and then connecting my computer to my TV, but that's pretty inconvenient. Could someone please recommend a quality 6.3mm female to 3.5mm male cable or converter on amazon? My budget is $20-30, I just don't want to buy some random no-brand cable and have it not work. Thank you!

Hey, no worries. I ended up going with this converter, it is a bit pricey but it has a 3.5mm output jack, which is exactly what I need. Reading some of the reviews for these types of adapters, I made sure to get one that wouldn't introduce any noise into the audio channel, as some do. Thanks though!

I got one of these. Since its externally powered, there isn't any audible difference in quality. Assuming you can balance the volume between the ps4 and your computer well enough, you should be fine.

Ya, that's not going to do what you want... It's not converting anything but the plug housing. It's optical in and out. It is not making a 3.5mm stereo analog signal.

You need a 3.5mm jack that looks exactly like the end of your headphones, with 2 black bands separating the 3 metal bands.

Also, depending on the turntable, you might have more issues. If the turntable has a standard rca plug on it (red and white), then you need to plug that into a port labeled phono. Any other port, and your music will sound bad, no bass, lo fi. Phono input jacks have a special eq curve built in to make up for subtractive eq used when pressing the record.

I'm sure there is a device to do what you want. Digital optical in, analog stereo 3.5mm out.

Easy enough; your Xbox has Optical Out for audio. You can bypass the monitor altogether. Just grab an Optical to 3.5mm adapter (like this one: [link])

And plug an optical cable in from the Xbox to this adapter, and then a 3.5mm audio cable from the adapter to your speakers. Amazon makes an AmazonBasics one here for cheap: [link]

You might need to play with the Audio Output settings menu on your Xbox, but I think this will work!

Honestly your best bet is gonna be cobbling converters and a regular mixer.

3.5mm is pretty simple, so I'll skip linking one of those.

Mixer has plenty of options, including things like the XENYX line.

I have to wonder though; what exactly is your use case?

Thanks for replying. Unfortunately, I've already returned the DAC and RCA to XLR adapter. So now I've just got the TV, which can send Dolby Digital or PCM signal through SPDIF output, and the powered monitor (as well as a section of XLR cable). The back of the monitor looks like this : [link] so I've got a few options for input, I just don't know what to do to get all of the sound out of the speaker. and yes, I only have one. I also have a KRK R6 passive monitor, but I don't plan on buying an amp unless I can get one for like $50.

Edit: Here are the parts that I had:

In another thread on another forum, the answer is to buy this:

> So I need to find a way to turn the Monitor into a recording device, not a playback device. Is there any way to do this?

Not too sure on that exactly, but I have an alternative for you that may be easier, which is basically how to get the same thing you had with your 360.

The XBox One can output audio over optical, so you simply have to convert that to 3.5mm, and the route to that is a DAC:

What I did when I first got my XBox1 and had a monitor without speakers was I used an optical -> 3.5mm active converter then put it into the line-in/mic port on my motherboard and set the listen option like you did with your 360. (On the XB1 in audio settings you can set it to output audio on the optical.)

This is what I used: [link] It comes with an optical cable, so all you should need is a male-male 3.5mm stereo cable to run between it and the line-in on your computer or speakers. (and a free power outlet)

(The following is extra information in case you want to output now or in the future to a 5.1 surround sound setup but don't have a receiver that can take XB1 input already)

I've upgraded since so that the XB1 can output to my surround speakers. I have speakers that have two inputs on them in front/rear/and center. I use Altec Lansing ACS41 for rear and center and Bose Companion 2 for the fronts. Then I have the optical from the XB1 going into one of these: [link] . (Then this one is personal to my system to allow me to easily control volume balance without having to run around to each speaker and disrupting the PC's balance which also go into those speakers.) I have three of these: [link] One for Front, Center, and Rear, next to each other on my desk, and then from there they go to the speakers.

You will need an optical DAC to convert the PS4 audio to analog. Then you will need an amp for both volume control, and because the K702 sucks without amplification.

The FiiO E6 is a cheap and decent amplifier. But with my cans, I use the more expensive Schiit Magni 2. Both amplifiers can be used on any line-level analog output (laptop, PS4 after DAC, PS3, etc...) so I would recommend the Magni 2 because your purchase isn't exclusive to the PS4.

Aux cables are only a couple bucks on amazon as well.

I use one of these sometimes:

It converts the optical to analog and you can plug in speakers via aux or RCA.

If you already have a headset, say, from the 360, you can get a converter if it doesn't have an optical audio option natively.

This is the latest from TB, and priced at half of the 800X's. Obviously everything works out of the box and no adapters are needed.

and obviously the chat adapter if you want to be able to talk.

This should do the trick, [link]

Ahh ok. You have loads of options depending on your budget?