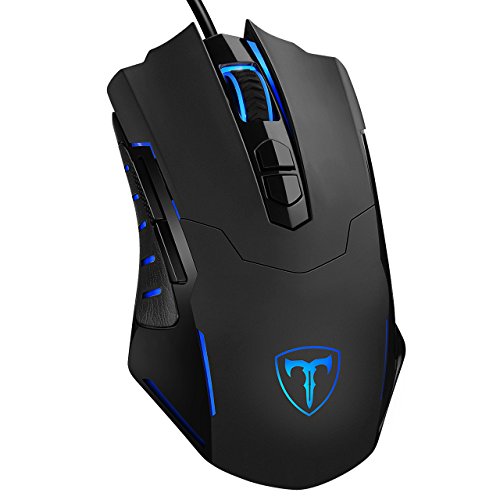 This product was mentioned in 19 comments, with an average of 0.84 upvotes

Can you please tell me if this mouse would work on the Xbox? And if I would be able to bind the two side buttons, cuz if not I’ll just stick to my regular mouse. Thanks for the help btw, I’m such a bot when it comes to computer stuff

Oh man if u need a budget mouse, try the

I recently bought a new mouse because my old one had some skipping problems and wasn’t good for aiming fast. Here’s the one I bought, I highly recommend plus it’s dirt cheap. Anyways good luck with your climb!

Not sure about keyboards, as I usually am happy with the one that came with my pc, (I might upgrade later). But I found that this mouse works very well, it does have lighting and is on the cheap. (Less than $20)

We have several PCs in our Home playing Rainbow Six. So this is my advice: Focus on the GPU and maximizing your FPS.

Personal Opinion: Mouse and Headsets are overrated. I have a 15€ Mouse from amazon [link] and it's perfect, i prefer it over my cheap Razer.

Get a cheap good Stereo Headset. I also have the Hyperx Cloud II like so many, because its cheap, but i turned all surround sounds off. Any other Headset will also do fine, i think. It's not that i think it's supergreat, sometimes when i play with speakers, i can also hear everything, it's not that these headsets are necessary imho, but i dont have much comparisons.

TLDR; Get a good GPU! And if you have money left, get a headset, just because its nice to have a mic and a headset.

If you're going with that kind of budget, I'd go with a bigger SSD. That's just me personally. Honestly, this gaming mouse was a lot cheaper, and I absolutely would recommend it. 1000W+ might be going off the deep-end. Consult others about this. I have the 24" version of that monitor. Love it. I'm pretty sure that the 1080 Ti will struggle to pull some games at 144 FPS (Witcher 3 comes to mind), but otherwise should be okay.

On second glance, you are right. I have a cheap mouse that looks sorta similar from a distance (at least it did on first glance). This is the one: https://www.amazon.com/gp/product/B01FZ3BR5S/ref=ppx_yo_dt_b_asin_title_o08_s00?ie=UTF8&amp;psc=1

Currently using this because my other amazon mouse had right click issues. it’s not too comfortable but it’s my only option hah

better touch tool won’t let you change the led’s so you are stuck with blue. but i have working side buttons. prior to this i used a razer death adder that had its own software.

This ones super cheap, has great reviews, and I'm liking it a lot so far, even with pretty heavy gaming use.

It only has two side buttons (which are actually handy), the RGB can be turned off with the software, has pretty loud clicks, and feels good. Worth a shot for the price, I thought, and have not been disappointed.

Hey I'm a little late to this but how do I adjust the polling rate and all for the mice? I can't find the settings in the PS4. And what sort of mouse do you recommend so that I can adjust these settings. Will this one do? https://www.amazon.com/PICTEK-Programmable-Breathing-Ergonomic-Computer/dp/B01FZ3BR5S/ref=sr_1_1/138-9521696-1628131?ie=UTF8&amp;qid=1530383062&amp;sr=8-1&amp;keywords=pictek u/Neymars_Lawyer_AMA u/SqwashGaming

I'd appreciate any help. I'm using an optical mouse right now and it's pretty shitty. It's wired so the latency isn't too bad. But I want something more smooth, using a controller seems to be more smooth (less jitter) than my mouse. Any help on my part?

get a gaming mouse from amazon and use the side buttons for your abilities makes it a lot easier.

that is mine i highly recommend it and it's cheap.

Next is to make sure you got gaming headphones as regular ones wont pick up the sounds of footsteps in this game i used skull candy hesh 2s and couldnt hear shit switched to cheap gaming head set and now i can like a pro.

next is to find good sensitivity and learn how to aim and GO FOR HEAD SHOTS! I can not emphasize that enough ECPECIALLY when they dont know your there. or if 2 people are fighting DO NOT engadge, let 1 of them win and hide and watch once he kills him he will stand still to loot most likely and when he does this go for the head shot with a slug or something and then body shot and kill him and take both their stuff.

thats basically it also use your abilities as much as posible and do not forget about them, they help immensely use them where it makes sense tho like my favorite class is assassin and i love to zap into a forge and use smoke bomb with a shotgun or rifle and i like to get a nice juicy head shot then switch to shotgun and immeaditely zap over their heads and shotgun them 3 times then i use my second concussion bomb ability and ill shoot 2 more and that usually does it if i land my first head shot.

I'm not using a mousepad and the one I tried makes it get like "stuck" I don't know how to explain it. I think I'm just gonna go with what I was originally gonna do and get this mouse: Picktek Gaming Mouse 15 bucks and the Amazon Basics Gaming Mousepad . What do you think?

I am a bot, and this action was performed automatically. Please [contact the moderators of this subreddit](/message/compose/?to=/r/GameDeals) if you have any questions or concerns.

I have that same keyboard. My first mechanical keyboard, It’s fine for gaming but typing anything is a pain. The keys are really loud and I was getting all my passwords wrong for a while. If I was gonna do any serious word processing (beyond just logging into accounts or searching google), I’d get something else. Like I said it works fine for games though, which is all I really use it for.

Also, the graphics card might be overkill. I have a GTX 1060 6gb and all the games I’ve tried run beautifully on ultra graphics. Depends what you’ll be using it for though.

This is the graphics card I went with, but I think it was around $30 cheaper at the time: [link]

Oh also I have this mouse: [link] it changes color and I have it set to blue to match the keyboard, if you’re into stuff like that.

I play arena shooters, space sims, tactical shooters and MMOs on a mouse I bought off Amazon for $10-$15 just fine. Why do you need to spend so much?