What is reddit's opinion of Plugable USB 3.0 Transfer Cable, Unlimited Use, Transfer Data Between 2 Windows PC's, Compatible with Windows 10, 8.1, 8, 7, Vista, XP, Bravura Easy Computer Sync Software Included?
From 3.5 billion comments
As an Amazon Associate I earn from qualifying purchases. The following content includes affiliate links for which I may make a small commission at no extra cost to you should you make a purchase. 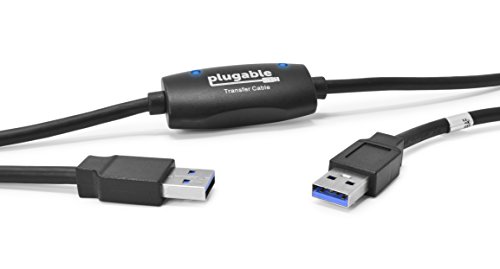 This product was mentioned in 5 comments, with an average of 1.40 upvotes

If you search for "usb transfer cable" you can find stuff like this. It says it is USB3 but read the reviews closely. I have no experience with this. It may be a Windows and Mac only product.

If you have an external hard drive(which I highly recommend you get one if you don't) you can just copy the files onto that and just plug it into your new laptop. Or you could get a transfer cable and just copy and and paste all your files over from your old laptop to the new one. I recommend both since the external hard drive is an extremely useful thing to have and a transfer cable is a nice thing to have laying around.

If you don't want to spend money just upload you skyrim save files and modlist onto google drive or another cloud storage and re download all your mods?

You could use a windows transfer cable

But simply using a patch cable or network connection between 2 machines is cheaper and likely to be the same speed (if wired).

You can do it through a usb bridge cable Here is a link to a USB 3.0 one on Amazon [link] Here is a USB 2.0 one on Amazon [link] Basically if you have a 2008 or newer laptop and you have blue USB ports you’d want the top cable or one like it if your computers older than 2008 or doesn’t have blue USB ports then you’d want the one on the bottom or one like it the main difference is the speed of the cable but the cable will ultimately be limited by the speed of the slowest port that you plug it into so if you have one USB 3.0 port on you laptop but a USB 2.0 port on your desktop then your still limited to USB 2.0 speed

[link] is helpful explaining things. But yes, one of the reasons Lenovo used USB C sans Thunderbolt is to make it compatible with a wider selection. Also: Lenovo docks (at least new) are a terrible value.

The Thunderbolt port in the T490 is an Alpine Ridge LP so there's only one DisplayPort signal on the Thunderbolt bus, limiting its usefulness. If you want to run two 4k @ 60 hz monitors, you will need to plug two cables on the T490 and the T495 both, no way around it. The only difference is while doing so, you can get USB 3.0 on the side if you use a Thunderbolt dock (perhaps built right into the monitor) and only USB 2.0 without Thunderbolt. Beyond that, I can think of only a few cases where Thunderbolt is necessary:

All in all the T495 is a great choice. The performance is similar enough to not matter.