What is reddit's opinion of Polywatch Plastic Lens Scratch Remover?
From 3.5 billion comments
As an Amazon Associate I earn from qualifying purchases. The following content includes affiliate links for which I may make a small commission at no extra cost to you should you make a purchase. 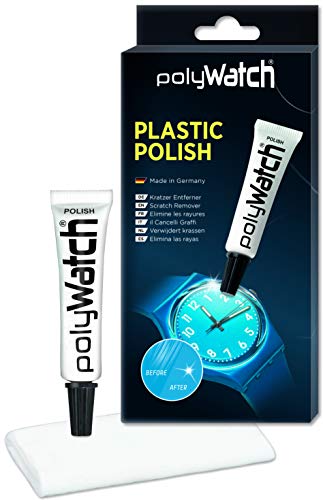 This product was mentioned in 31 comments, with an average of 1.61 upvotes

Some Polywatch will buff it right out. It's perfect for plastic (acrylic) crystals, I've used it a bunch. All the negative reviews are from dumbasses who tried to use it on a non-plastic crystal (e.g., eyeglasses)

Sure thing! You probably don't want to use pegwood on the dial- the paint is much more susceptible to scratching than metal, so there's a good chance that it would hurt more than help. Rodico would be the way to go there- it probably won't be perfect, but it'll be better than a scratched dial. The crystal is most likely acrylic, so rodico should take away most of the dirt. If there's scratches, a tube of polywatch should get rid of most of them fairly easily. You can also probably find a replacement crystal without too much difficulty. Installing it is difficult, at best, without a proper crystal press (the cheap ones on Amazon won't do the trick), but a watchmaker could easily do it for a nominal fee.

That model is a 43 mm, though, which is quite a bit larger than your target. There are deals to be had on the 40mm subseconds model; I picked one up a few years ago for $400. Be aware, though, that even though the thickness is comparable to a lot of other watches, it seems thicker due to the lack of any taper on the bezel. Unfortunately, I can't think of any gold marine-styled watches that aren't four figures or more, and most marine watches tend to be on the larger side. The Stowa is probably going to be your best bet, especially if you can find one used.

You might already be aware of this, but you can polish out most scratches in an acrylic crystal like the Max Bill has in just a few minutes with a tube of polywatch. Of course, that won't help with the movement repairs.

In the future, if contacts are an option, try to use those. I play with contacts exclusively to prevent my glasses from scratching the lenses.

While replacing any part of the Oculus Rift CV1 HMD can be challenging, it's not rocket science. You can buy a replacement lens on Ebay for approximate $40. If the scuff is not deep you can use Polywatch

If the crystal is acrylic, you can probably buff out the scratches with some polywatch. The stuff works wonders, and it's easy to use.

I'd think that restoring color to the dial would be difficult without screwing it up. You might want to search for some dial restoration companies; if they can't do it themselves, they might at least be able to point you in the right direction. I don't imagine that it would be cheap, but I've never priced out a restoration like that.

There's a product called polywatch that's a miracle substance on acrylic/plexi crystals. Just apply a bit of that, rub it down with a microfiber cloth for a couple minutes, and good as new.

Also, nice choice. That's a hell of a first watch.

If the crystal's scratches aren't too deep, you could probably fix some of them with Polywatch without having to replace it.

I think a leather band would be a pretty good look. Keep in mind that these Rolexes have a somewhat unusual band width of 19mm.

I've been able to buff out any minor scrapes with the Polywatch that I used for my OG Pebble. I've found most scrapes on the metal are very superficial and can be buffed out quicker than on plastic.

I've used Polywatch plastic buffing cream before on my PSP, it worked, but it took a very long time. The Vita screen is likely harder than the PSP, so it's probably going to take even longer to buff. (1.5-2hrs)

If you can't get it fixed through Nintendo, this stuff works very well for getting the scratches out. I used it after I got a few small scratches playing The World Ends with You, and it seemed to get them right out. Now I have a screen protector on there.

If talking to oculus support doesn't work out, try polishing you lens with Polywatch: https://www.amazon.com/Polywatch-Plastic-Lens-Scratch-Remover/dp/B0014R9V9O

Others have used it effectively in the past to remove damage from their lenses.

WTF is Polywatch? *Heads to Google...*

If you want to go for the original look, I believe that the Big Zero crystals were flat-topped, so they were more cylindrical than domed. You can typically find that style on ebay if you search for "Big Zero Crystal" (here, for example). It's not a horribly common style, so I doubt that most watchmakers would have one.

Alternatively, a standard domed crystal would also work. A local watchmaker might have one in stock in the right size (or could certainly order one if they don't have it); you can also get them at Esslingers.com. Getting the right size can be tricky, though; I don't know what size crystal it takes (the ebay link above says 35.5mm, FWIW). You can get a cheap caliper to measure the opening, but the crystal needs to be slightly larger than the opening (as it need to be compressed when it is installed).

Acrylic crystals can be a bit tricky to install (if you do it yourself). Ideally, you'll want to use an actual crystal insertion tool, but they aren't particularly cheap. The cheaper alternative is a crystal lift. I'm not a huge fan of the lifts, as they seem to be best for scratching and/or breaking crystals, but some others have had better luck. If you're just looking to have this single crystal installed, you will probably want to have a watchmaker do it; if you want the original look, buy a crystal on ebay to supply to them, and if not, let them supply a domed crystal for you.

I'd also recommend that you pick up a tube of polywatch from Amazon; it is fantastic for taking out light to medium scratches.

Hey there! Looks like the previous comment was deleted. I just wanted to chime in and mention Polywatch as a product that is really helpful for assuaging your hesalite scratch fears. Here's a link

And here's a video of someone actually using it. Don't let scratches scare you off from wearing that beaut!

I saw this thing in a video once. You put it on plastic and it supposedly fixes scratches. It worked on sandpaper to the lenses so... [link]

I think this is the link:

[link] Is this the right one?

I had similar happen with my Rift CV1. I ended up using Polywatch to get rid of the scratch. Worked well.

Of there are scratches just use polywatch

Glad you like them, and are enjoying your new watch.

>$600 seems reasonable for a new bracelet, though I think any extra money I have is going toward the repair and insurance for the time being. It's really hard to believe I'm wearing something that is ten times more than my first car.

Yeah, in the scope of vintage rolex parts, they're pretty reasonable. If you ever decide to make the switch, more than likely the oyster that's on there is worth about the same amount and would pay for the swap. I'm guessing yours is a 78360, since it's a later 1675. The equivalent jubilee would be a 62510 and would come with 555 endlinks.

>Do you use the stock spring bars for your nato straps? How did you remove the spring bars from the watch? Do you need two tools to press on both sides? Also, how do you adjust the pins on the micro-adjustment latch? Two tools as well? I have so many questions hahah

Yep, I use the standard shoulderless springbars. They're actually especially good for natos as they're a little thicker and more robust.

It's a different tool to take them off and put them back on. Taking them off is pretty easy. You need a tool that's essentially just a thin metal rod that fits into the lug hole on the outside of the case. You use that to push the springbar down while simultaneously pushing the endlink away from the case. Then once one side of the springbar is dislodged, you repeat the process for the other side. Getting them back in you use a springbar tool that sort of cradles around the thinner piece of the springbar. Place the opposite end in its hole, then push down to compress the springbar and slide it into place. Oftentimes these two tools come as two sides of one tool. Something like this. The lefthand side is for the lug holes, the righthand side is for the springbar. It sounds complicated, but it's easy to do. Get the guys at the RSC to show you when you pick up the watch. Putting the bracelet back on is a bit tougher because the tolerances in the endlinks are very fine, and you'll need to be careful not to scratch up the back of the lugs. With a little practice though, it becomes second nature.

Micro adjust is the left side of that tool, same as the lug holes. Push the tool through the hole, push the micro adjust towards the direction you want it to go to prevent the springbar from going right back into the hole, then do the other side. Then it's a matter of gently guiding it to the new hole.

Oh, and depending on if they're charging you for the crystal, you might want to just take care of that yourself. This stuff is a wonder substance for fixing up acrylic crystals. You just apply a dab to the crystal and polish by hand using a microfiber cloth. It works incredibly well and is good to just keep around in case you ever scratch the crystal in the future.

The scratches can be simply polished out using Polywatch.

A non running watch is going to be worth less. Did you do a battery change?

You might have good luck polishing the crystal on your own with some Polywatch; I've used it on acrylic crystals and it has worked miracles for me.

it shouldn't but if you are paranoid like I am about this stuff, then get Polywatch and remove the scratch if its on the outside.

It is a Hesalite crystal (plastic). I can't tell if the damage is deep or just on the surface. But plastic crystals scratch very easy but are easy to buff them out.

You can use some polywatch.

Edit: I believe toothpaste would work.as well, but prefer polywatch.

Also alternatively the watch should have warranty possibly if it is deep. But again common to easily scratch the top of the plastic crystal.

You should search "chronograph sapphire watch" — but, that said, I think you're pretty much stuck with Citizen or Seiko, and it'll be tough to stay under $200.

Like others have suggested, I think you'll get better bang for your buck if you don't mind the sapphire. A really nice thing with plastic crystals is that you can use Polywatch to buff it out, and it looks new. So, if I were you, I'd use $200 on the chronograph I wanted and buffed out scratched as they appear.