What is Reddit's opinion of PortaPow USB Power Blocker - Only Data, No Power?
From 3.5 billion Reddit comments
As an Amazon Associate I earn from qualifying purchases. The following content includes affiliate links for which I may make a small commission at no extra cost to you should you make a purchase. 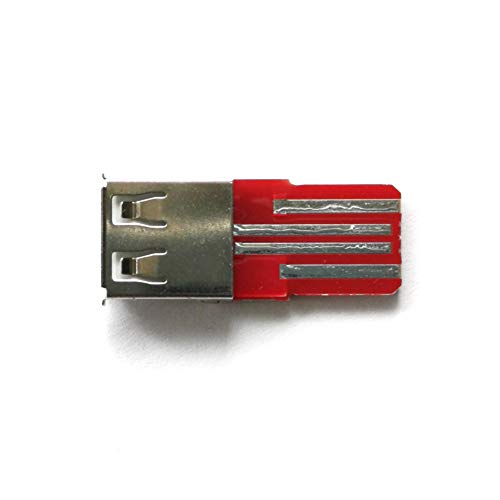 This is an issue. There are some solutions, many people use tape to block the 5v+ contact. Then there's this: [link]

The danger is that although the board sees power the mains are not. so bad things may happen if a stepper tries to move.

The order that things get turned on or shut down doesn't really matter. Just make sure you always shut down the Pi properly before turning it off. Or, leave it on 24/7: It doesn't use much power and no harm will come of it by running forever. (Bonus: If you leave it on, you can plug the printer into a smart outlet and have Octoprint turn the printer on and off for you automatically.)

Even a Pi 3 (all of which come with 1GB of RAM) is overkill for Octoprint: It's just not very memory-hungry, generally-speaking, in modern-computing terms. And sending serial data to a printer (which itself is powered by the equivalent of an Arduino) isn't an arduous task for a quad-core ARM machine.

If wifi works for you, then sure: Use it. Pis generally don't have the best antenna (it's a quite excellent antenna for its size, but that size is very, very small), but if it works then it works. That said: As a rule, if I can easily plug a thing into the network instead of use wifi, then I always plug that thing in, just to keep the wireless network maximally-available for things that cannot be plugged in.

And definitely block the 5V line on the USB cable. It causes issues. I usually cut open the cable and clip a section out of the red wire, but some others like to tape up the 5V contact on one of the USB connectors, and still others use a device like this to block power.

As the other folks have commented, the motherboard is getting power from the raspberry pi which it should not. Rather than relying on tape though, which somehow works it’s way off, I suggest getting one of these. They work very well. [link]

Are you primarily gaming? Are you seeing a delay in BT from normal office/browsing? If you are seeing a big delay in BT (other than waking up from sleep) then you have a different problem, perhaps interference or the radios are too far away from one another. I have K2, K4 and K6 with no BT issues at all with 3 different Lenovo laptops, all BT 5.0. I hardwire for competitive FPS games and the like.

I collect some flashlights that you li-on batteries. FYI - stay away from the flashlight reddit and budget light forum....- can be very addictive :-) From what I understand to improve the lifespan of a li-ion battery it should be exercised, i.e. run down and recharged. But if you don't ever plan on using it - I am not sure it matters. You could consider unplugging the battery - I assume the keyboard work without it connect. They also make something like this- that disconnects power at the USB connector. I think there are more versions of this out there on ali and ebay.

I thought about doing the tape trick, but saw this mentioned somewhere. Working great for me!

The extra wires present in USB 3 are just data, not power. The 5V line is in the same place for all of the normal variations of the USB A connector.

I'm guessing that /u/specimen12 got the tape wrong somehow.

(and since I summoned him: check this thing out. [link]. It's cheap and does not involve wrangling bits of tape that are inside of holes.)

I find my setup super useful. pi 3b+ with an ender 3v2. Once you get the ender compatibility plugins, i have had no issues with octoprint. I only send it already fully sliced files. But you can load up a bunch, and then print them whenever you want without needing to slice or move files around.

I use the creality firmware with bltouch, and its been pretty much problem free once it got dialed in, and the plugin "Bed Visualizer" along with bltouch made leveling the bed super easy.

I got one of these to block the power on the usb connection.. I could have used the electrical tape method, but didnt want the tape slipping and need to adjust it at some point later:
https://www.amazon.com/gp/product/B08VHDKCX3/ref=ppx_yo_dt_b_asin_title_o05_s00?ie=UTF8&amp;psc=1

Its really nice being able to check progress (can see % and current later/total layers) from my phone and pull up the webcam view on my phone to make sure its not spaghetti city during a long print.

There are also filament manager plugins to keep track of spool weight and will let you know if you try to print something with not enough filament left. If you are looking at this for just "remote printing" then you might not see the full benefit of running this.. The big power comes with the addons and other things you can do with the Pi to make the printing experience better and more controlled.

There is also an integration with Hubitat, that i have contributed to, which pulls in data to Hubitat from octoprint for logging and automations. It will send me alerts when the print has completed or if it errors mid print. Can also control lights/power/etc based on printer status if I wanted to.

I also noticed that when I turn off my Ender 3 v2 that the printer display is still on because of the power on the Pi USB line.

I just make sure to turn off the power to the Pi first, then the printer. Or when starting, I start up the printer first then the Pi.

After reading some stuff from that link by jhk84 I just bought a USB Power Blocker for $6.49 just to see if it works. Just seems a little more eloquent than the tape fix.