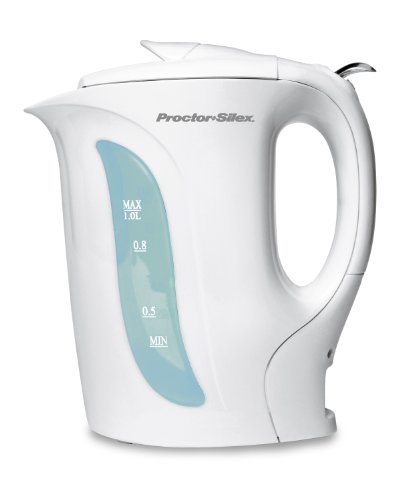 This product was mentioned in 15 comments, with an average of 0.93 upvotes

american electrical kettle owner here, unless i'm boiling a single cup of water, it takes more than a minute to boil. when i fill it to max fill it takes about 4 minutes.

this is the kettle i have

If price is the most important factor for you, and you don't really care about temperature control then this one works great.

I have it and it heats to boiling super quickly. It's nothing special, but it gets the job done and the price is unbeatable. If you are looking for something with temperature control then you probably can't find anything below $35 unfortunately.

I also drink a lot of iced tea... and I use an electric kettle.

I grew up drinking iced tea, but switched to soda almost exclusively as a teen. When I moved to Charlotte, the convenience store closest to us always had 12 packs of Coke on sale every other week for 2/$5. My GF & I would buy a dozen or so, then stock up again when Coke was back on sale.

For some reason, soda prices went way up in 2008; around the same time we got a Sam's membership, where I noticed that a 48 count box of gallon-size tea bags was only $9.72. Not counting water or electricity, that's only 20¢ a gallon... a much better deal than Coke.

But making tea on the stove was a pain in the ass. I got a Bodum kettle for Christmas and loved it. It was significantly faster than the stove, safer (no worries about an errant cat getting on the stove), and could be put away easily (it was plastic, so it didn't get very hot. You could toss it in a cabinet when done, unlike a metal kettle that needed time to cool down).

I've been using a cheap Proctor Silex kettle very similar to this one for a few years now at work, also with an AeroPress, and it's been working perfectly. I use it at least once and usually two or three times a day and it's still good as new. After a while you can recognize the sound it makes as the water heats up so if you want water cooler than boiling you can stop it early with pretty consistent results (though I also have a cheap thermometer just in case I get distracted, which happens a lot at work).

Buy a cheap water kettle. I have one like this Then you can do ramen, tea or whatever.

Tangent, have you ever seen one of these dealies Birdy? I love mine :)

I'm on my second one, the first lasted two years :) I loved it because I could bring it to whatever room I was in and get hot tea without having to go downstairs. My day job is working from a home office for a call center, so going downstairs to get the microwave took me away from the computer for too long in case my phone rang.

My ex had the CHW-12. It doesn't actually instantly make hot water, it takes a minute or so to heat up. It's really good for making tea but you're better off getting a separate electric kettle and then something else to make decent coffee with. Coffeemakers like the CHW are OK but are really only good for consistently making a big batch of mediocre coffee. this thing heats up enough water for tea in about the same amount of time and will last a million years. Drawback: ugly as sin. I dunno.

I got great results from this $15 kettle. I boiled the water then mixed cold water in until I got the temperature I wanted.

I'd still be using it, but my thermometer broke and I just got a temperature-controlled kettle instead.

When I was new to tea I bought this and it still works. Probably not the best or what people here would suggest, but for someone getting started, it works just fine.

Yes, 240V. I am talking about a normal water heater used in kitchens. Something like this

here are some options:

Or the nicer options: gooseneck

At the end of the day you don't need much to do well. I have the first one I linked to in my office and use it for french press and Aeropress regularly. I have the variable gooseneck at home and love it, my parents have the regular gooseneck and it works great too.

I chose this guy.

I like it so far, but I want to upgrade to something that holds more water and allows me to change temps.

Just buy your own damn kettle, rather than act like little children