What is reddit's opinion of PS4 T.A.C.4?
From 3.5 billion comments
created by @mouseofleaves 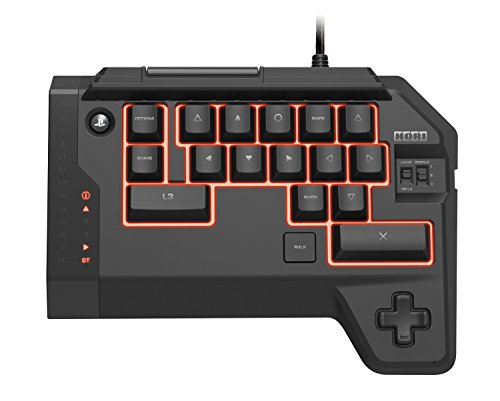 This product was mentioned in 21 comments, with an average of 0.90 upvotes

There is an official PS4 mini keyboard & mouse available which is straight plug and play with no messing around changing settings/downloading update patches for different games & it looks like a better option than the xim, have a look at it for yourself here

I was looking at this...

But yours makes more sense. I've just been struggling with the idea of getting either a newer gaming laptop or building a new tower to play GTA5, Fallout 4, etc. The ease of just playing a game, knowing it'll work but not be perfect graphically... kind of appealing.

Is it? Did you read OP's question? I think OP meant a standalone controller thing similar to that abomination mutant creation that was on the PS4 sub the other day.

is only veiwable in uk store it seems though, also looks like a straight remapping of the controller which hopefully means the PS4 reads it as a controller so devs wont have to put as much work in getting it compatible with their games

not according to sony.

Don't think so. not a full keyboard so definitely not just for the web browser.

a KB&M can be used on console with something like the Hori Tactical Commander 4
Hori makes top end fightsticks, but i have not used this product.

However, I would swap out the Hori mouse for a logitech g300s

there is an official keyboard conroller which should be compatible [link]

> I would kill to have KB/M on console shooters.

If you'd kill, you have some options.

There is this and this, quite expensive though.

I just learned about this as well.

There is an official kb&m licensed by Sony for ps4, haven't bought it myself but I saw it on Amazon *edit: formatting

I know this is a joke but there IS hardware out to let you use a dual shock on an Xbox and vice versa.

Custom controllers are a thing, and they give you an advantage. Everybody seems to draw the line with mouse and keyboard, though.

Also this thing
Hori, most famous for making arcade sticks, has an official license from Sony to build the Tactical Assault Commander 4 to work with PS4 and PS3

[link] All PS4 players rejoice as we can now expierce the thrills of mouse and keyboard on PS4!!

There is this [link]

It's a keyboard and mouse that the PS4 sees as a controller.

Honestly, it's like saying "hey that guy got me, he must be hacking or lagging using a mouse, because I'm so great, who could possibly beat me?" People throw around the accusation in the higher levels of console overwatch I see it like almost every game someone in my party is saying mouse and kb.

There are many different peripherals that enhance and give an advantage. Examples are a Scuf controller, kontrol freak things, better monitor, faster internet, higher resolution, fighting stick, racing wheels.

Lastly sony even has an official adapter you can buy here and it looks kinda of cool but once again super pricey which bars most of the console pop from even considering it as most people dont know you can do it but as people continue to accuse people of it because they get beat it will become a widespread thing they have been around since COD days.