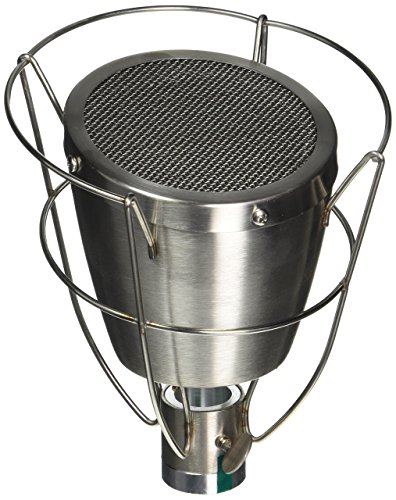 This product was mentioned in 45 comments, with an average of 4.62 upvotes

I've already moved away from the cast iron just because I got tired of smoking myself out of the house. Having to open all the windows and doors. So I have been using a charcoal chimney to really good effect but still excited to give the Searzall a try.

I use the ziplock method, I tried doing a vacuum sealer but it got expensive and the ziplock method actually ends up working better. Couldn't get a good seal with the cheap vacuum sealers on amazon. No problems, I use a searing attachment on a propane torch ([link]) and it sears beautifully. I've also done a sear in a really hot cast iron pan and that works really well on fattier steaks like ribeye. The pan tends to cook the meat a bit but the torch keeps it medium rare throughout the entire steak.

I think there's the foundation of a good idea here, but I think it needs more work. One of the attractions of al pastor is that it's broiled on the trompo, so the bits of meat are seared at high heat, which lends them a lot of flavor. I think it's great that you're smoking the meat, but after it's cooked, I still think you're missing out if you skip the sear. You could hit it with a Searzall, ideally, or just a plain propane torch.

A residential oven won't get hot enough to do what you're looking for. Assuming no other available options I would use the torch with the proper attachment:

If you put the meat in the freezer with a fan blowing on it for like 5 minutes you reduce the grey band going around the outside to be even smaller.

Whipped cream siphon. Homemade whipped cream is great, and you can do a lot with flavors, or get into more exotic recipes.

A Searzall torch lets you apply direct flame to food without scorching one tiny spot. I like it for when I don't want to flip something but want the top to cook, like an omelette that's a little too thick.

I have the same problem myself, and all the suggestions here are spot on. One alternative you can try is the Searzall torch attachment: [link]

It was developed by the chefs at Momofuku so they could try to perfectly sear a piece of meat without having to use any oil or directly torch a piece of meat. Of course you would have to buy a torch with the attachment, but if you plan on searing a lot in your apartment it may be worth it.

ended up doing two hours just to be safe. it tasted amazing. i need a better searing solution, though. my hood can't handle the smoke generated by a scorching-hot cast-iron skillet. i might look into one of those searing torch attachments.

If you haven't tried it, an oven pouch. (It's in my mind, since it's what's for dinner.) Get a sheet of parchment paper big enough to overlay a sheet of foil. (this makes everything fairly free of mess.) I usually cook mine at 400 degrees F and test with a thermometer.

The idea is to put together your proteins, starches and liquids so that it cooks nicely and creates it's own sauce (on a good day.)

Since you are in a mood for curry, why not do some chicken thighs? Give them a rub in olive oil and madras curry and cook them on a base of yellow onion, whole garlic cloves, quartered peppers and a bit of coconut milk or chicken stock. Serve with a nice rice. If you like your chicken browned, remove from the pouch and give them a quick broil, or whip out Dad's old Brulee' torch.

I'm going to be going with medallions of pork loin on a bed of cabbage, with mild home saurkraut and apple sauce, served over rice cooked with frozen green peas.

It's a solid technique for people who are barely conscious. I mean, even when you have the flu, you still have to cook.

That over cooked ring is still way too large. You need to sear hotter and faster. This is more of what it should look like.

I got a sous vide a few years back and use it at least once a week.

I'd suggest doing it with the chimney starter itself, al la Alton Brown, or get yourself a torch and a Searzall

I like using the torch at the table because it impresses all my drunk friends.

Hey, off-subject, but I was following your post history to see if I could find the drama, and noticed the bit about culinary torches?

I think this is the answer to your problem.

The Kickstarter is long over, but the page gives an excellent overview of what it is, what it does, and why.

It's now on Amazon.

If you thought /r/slowcooking was fun, wait until you get a load of /r/sousvide!

I got my Searzall from Amazon, ships to Australia. The gas torch itself I picked up from any hardware store - make sure you get the bernzomatic ts8000 if you’re planning to attach the searzall (don’t know if it’s required but it’s the one they recommend).

Containers were quite tricky for me to find. I ended up going with two Vogue Polycarbonate Gastronorm containers online from www.nisbets.com.au - the 1/1 200m container for large cooks (brisket etc) and 1/2 200mm container for everyday stuff.

I got the matching lids for both and cut a hole out for the Anova myself using a powered jigsaw which worked great on the polycarbonate, no cracks or sharp edges.

To level up that torch get one of these

As far as the Searzall goes, if you go in with the proper expectations, it's great! Those are:

If cheese-melting isn't a requirement for you, then SearTec has a $20 alternative available, which uses MAP gas (130F hotter than propane). Pretty nice tool, I have one on my wishlist:

It really depends on what you want to do & how you want to do it. I have my Searzall plus a small culinary torch (for smaller & more delicate items like creme brulee) for indoor use; they both get used often. For outdoor use, I have a 12" cast-iron skillet & a 575F 1800w plug-in induction hot plate. I let it preheat, do a mayo crust on the steak, comes out great every time! I don't have to heat up my grill or wait on a charcoal chimney or anything either. Really great setup!

Got a link to the Northfield Broiler? Haven't heard of that one before! There are some interesting gadgets out there, such as the Otto Grill:

If I had a zillion bucks & a kitchen that wasn't comically small, I'd probably get a Bluestar indoor salamander:

Bit of a hassle to do the searing outdoors, but as my kitchen is unventilated, it's the best option for now!

One of these and go outside, or deal with the smoke, or cook at lower temp and ruin your steak. [link]

You need a searzall attachment which eliminates the gas taste.
[link]

You can get this little attachment for your blowtorch Searzall VP-W9QH-W44L Torch Attachment, Small, Stainless [link]

Typically a blow torch with the Searzall is recommended around here, I have one and it works great!

I love to sous vide and 'invested' in one of these and these. It's not cheap, but if you cook meat sous vide a lot it's worth it as you don't get that butane flavor you get with the smaller hand-held blow torch.

I have been using charcoal too. Anyone use a Searzall? [link]

Could you not just order it from Amazon.com?

i really want to get a sous vide machine, the only thing is i like a good searing, but i think with one of these it work out well.

This Searzall blowtorch attachment might interest some of you. I use it sometimes to even out / thicken the crust. It's also useful on pizza.

While we're at it, I found this little accessory

500 bucks? No thanks. If I want cold in the middle and black outside, I'll just use a searing torch.

Im talking about this [link]

But you didn't buy a torch? Buy Torch Flame Spreader + Torch Trigger + Propane Canister and have this cost 10/cylinder for rest of your life- and stop with the smoke.

*edit - the 810 linked by the price bot below does not fit the 8000. the searzall which is a clone of the torch spreader used at Momofuku I updated my link to DOES fit it, but costs 10x more. but its a once/twice lifetime expense, so manageable.

Your title is confusing. From what I've seen on this subreddit I think the Sansaire searing torch is just a BZ4500HS torch painted white and branded for Sansaire.

The Searzall appears to still be available (from 3rd party sellers including Booker and Dax) for $75 from amazon but like /u/afrayed said, you still need a torch to use the Searzall. The TS8000 would work just fine with the Searzall... [link]

As I was typing this one of the page keeps changing so maybe they don't have any more left. You might try contacting Booker and Dax directly to see if they know when they will have more available on Amazon for the normal $75. Here is a link to their seller page [link]

For others who are curious: [link]

The control on mine is pretty simple - two buttons, one dial. Setting temperature is press right button, spin dial to set (0.1°C increments, but adjusts somewhat exponentially to the speed of turning the dial), press button again. Takes maybe 10 seconds.

Setting the countdown timer is left button a couple of times, spin dial to time in minutes, either button to set, then the display flashes between the timer and temperature while it's running.

I use a stainless bain marie pan like that for normal cooks (up to about 4 or 5 steaks), definitely a good cooking vessel but they don't tend to be cheap (I think the one I use was $90 for about 10L capacity. I'd try a commercial kitchenware outlet (try Southern Hopspitality that I linked to above if there's one near you), they'll have plenty of this sort of stuff to choose from.

Seems a lot of effort to fire up a coal bbq for 2 minutes of cooking, but then you can always do the sides on the bbq I guess, asparagus cooked that way is great.

A blowtorch also makes a good addition to the kitchen for finishing sous vide cooking. Not one of those pathetic ones people use for creme brulee though, you need to be shopping in the plumbing section (see also the Searzall which is designed to go on one of those torches).

I wanna try one of these:

hey you look like you need a searzall
P.s. I'm not affiliated to searzall.

If you want to avoid "torch taste" the Searzall, while expensive, works well. I don't regret the purchase at all.

This right here is your new best friend.