What is reddit's opinion of Showrunners: The Art of Running a TV Show?
From 3.5 billion comments
As an Amazon Associate I earn from qualifying purchases. 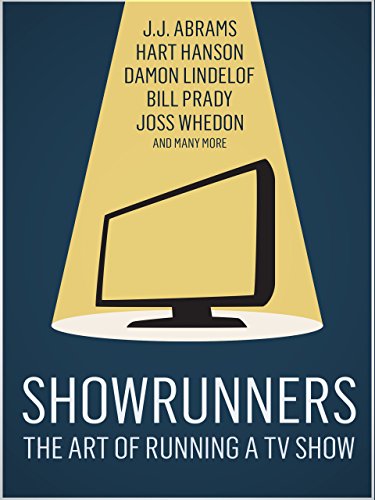 This product was mentioned in 6 comments, with an average of 1.83 upvotes

It's concomitant with the rise of "prestige" television. There's no faster shorthand for figuring out what show might be like than to know who the showrunner is.

In films you follow a director. In television, you (should) follow a showrunner. About ten to fifteen years ago, you typically only found the term in entertainment industry press (e.g., Variety), but with fandom getting their hands on said press and hitting the internet, the term has become far more ubiquitous, and it's a great shorthand vs. "The executive producer who created and/or is in charge of the general artistic vision of the show and is responsible for its delivery to the network/studio."

Many tv shows have multiple executive producers who are not showrunners. And these days, showrunners often cross and recross the gap between tv and film (e.g., JJ Abrams and Joss Whedon).

If you really want to know what the job of showrunner entails, I'd highly recommend watching the documentary film, Showrunners: The Art of Running a TV Show, which is currently up on Amazon Prime.

It's been interesting to see folks coming to 3 Below before going to Trollhunters. It's one of the nice by-products of streaming that it doesn't matter these days what order you come to things in; the older stuff is still around to find. Broadcast wouldn't let you do that.

For example, folks who want to find Dragons: Riders of Berk after watching Dragons: Race to the Edge would have a much harder time. I think Universal TV is finally getting around to running Defenders of Berk (the second series) along with Race to the Edge on cable, but the split in the run between Cartoon Network and Netflix and the renaming-every-season thing means How to Train Your Dragon fans who've come to the show late have a really hard time watching the entire series.

Also, Dreamworks animated shows can be pretty high quality (yes, even Boss Baby: Back in Business and The Epic Tales of Captain Underpants. :) But "kiddy" was never an issue to me. To me, it tends to tighten the work tremendously when writers can't rely on shock-value to hold your attention but have to do it all with plots and character. And have to stick to 23 minute runtimes. :D

The reason I first began watching Trollhunters had nothing to do with Netflix or fantasy or kids or cartoons. It was one name: Guillermo del Toro. 'Cause the guy who wrote The Strain, Pan's Labyrinth, Crimson Peak, and The Shape of Water is unlikely to make a magic troll show "too kiddy." :) And I have a feeling his Netflix Pinocchio movie*,* isn't going to be, either.

While it's getting more common these days for film directors to cross over to showrunning television, it's still rare enough to make me sit up and take notice, particularly when it's a film director whose work I really like and follow (I'm also really looking forward to Rene Echeverria's Carnival Row on Amazon, because del Toro wrote their pilot, and well, because it's Rene Echeverria and Dark Angel was one of my faves back in the day).

If you like television, paying attention to who the showrunner (the main producer/writer who typically creates and guides the vision/concept of the show) is can be a really good guide on whether or not you'll like the show.

See also: <em>Showrunners: The Art of Running a Show</em> (US Amazon Prime link).

Just me, but if you have Amazon Prime, go watch Showrunners: The Art of Running a TV Show. That may help you get your expectations more closely aligned to reality. :D

Not for Zoom rooms, but check out Showrunners and Children of Tendu.

You may get a few tips from these videos. Maybe a lot, if you are new to all this stuff.

Maybe watch Showrunners: The Art of Running a TV Show on Amazon Prime, to get a sense of just what a showrunner writer/producer does.