What is reddit's opinion of Silipos Malleolar Ankle Sleeve, #15005, One Size fits Most?
From 3.5 billion comments
Created by @mouseofleaves.
As an Amazon Associate I earn from qualifying purchases. 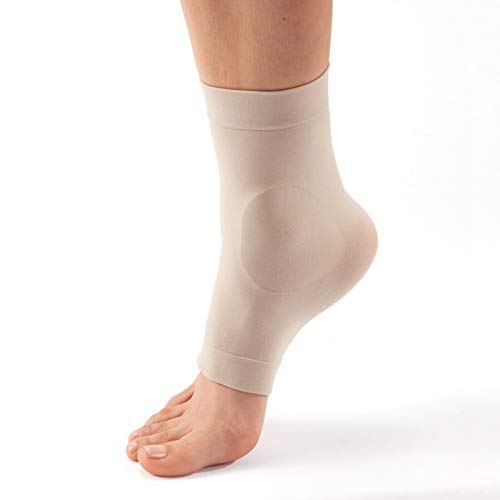 Yeah, with the screw on one side of my ankle and a plate (with screws) on the other, I have to wear a big, fat gel sock in order to skate, and it's still uncomfortable. Without it on, it's almost impossible to move due to the pain from having the laces tight to skate.

Hah - that's a fair point for sure, and something I thought about. As a matter of fact, I originally chose the Maxxums because I liked the idea of the control of the hard boot I was used to from my old skates when I was a kid (the Rollerblade Lightnings with the yellow wheels) combined with the modern large wheels and frame. And to be sure, they are great.

That said, I've decided I want to do longer distance type stuff... I'll still have use for my 'urban' Maxxums, but after 10 miles or so they start to hurt, and it's the kind of pain that really makes me think it's the boot -- it doesn't get tired like musce fatigue and as soon as I remove the skates the pain is gone. Combined with the fact that I now know I should have gone a bit bigger and I'm pretty sure that it's the boot just pressing in to my ankle (lower ankle, on the inside, the 'inner nub bone' lol). It sort of feels like shin splints, but the pain stops the second I take the skates off, and just putting my hand in there I can feel the hard spots where it hurts my feet. I should add I tried a "Malleolar Ankle Sleeve" with pads on the ankles right where my skates hurt ([link]) and they helped a little, but not enough.

So you could be right, but having seen (but not tried - too big a size difference) my friend's soft boot (but still high boot with some support) they look like they'd be perfect. Am I right in thinking the Tempest boot looks similar to the K2 VO2 100 boot?

Also to answer the question earlier about my skills/experience with skates... As a teenager in the 90s I used rollerblades for my main transportation. Never wanted a bike, I had skates. So I did a lot of skating in urban and suburban areas, mostly sidewalks and some streets. Lots of parking lots. No brake. After college I skated a tiny bit in my 20s, and then pretty much not at all until I got my Maxxums in June (I'm 39 now). After a few easy sessions with the brake to build confidence, I pretty quickly wass up to ~10 miles per session. I did a week or two straight of such sessions every day and then work got crazy again, so for the last few weeks I've done ~10 miles twice per weekend. I also cycle and lift weights, so I've got leg strength. I would be doing longer sessions were it not for the pain of my skates digging in after 9 or 10 miles or so. I was able to push to 14 miles once but the pain (not being too tired) made me stop. I've never had any major falls and I'm going pretty fast (though there are lots of turns so I can't get going too too fast), catching and passing most cyclists pretty easily.

So I'd say I'm advanced for a casual skater. I want to do a marathon, but not to beat anyone, just to do it...

These really helped me. They are for the ball of your ankle but you can move it anywhere on your foot that is being bothered. [link]