What is reddit's opinion of Silk Shiny Fast Color Gradient Change Rainbow Multicolored 3D Printer PLA Filament - 1.75mm 3D Printing Material 1kg 2.2lbs Spool, Widely Compatible for FDM 3D Printer with One Bottle Gift by TTYT3D?
From 3.5 billion comments
As an Amazon Associate I earn from qualifying purchases. The following content includes affiliate links for which I may make a small commission at no extra cost to you should you make a purchase. 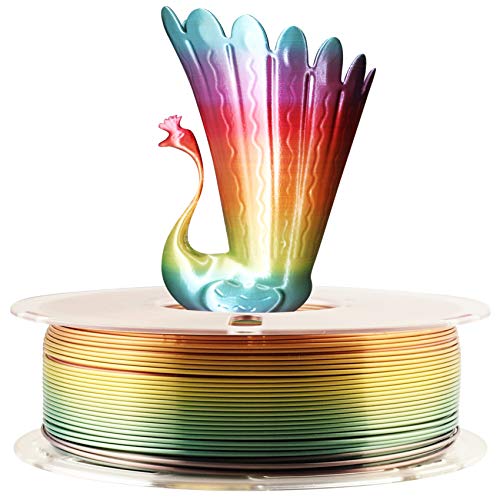 This product was mentioned in 53 comments, with an average of 1.75 upvotes

I've tried a few rainbow pla rolls and the big takeaway i got was make sure you get a "fast" color change one. tty3d seemed better than the others i tried, but even with it, i was cranking up infill to burn through more plastic and actually get some sort of rainbow gradient. Some of the other brands it would be more of a "let's see what random single color this Pikachu will end up being."

Also a company called unicofil makes some short transition filament. Printing more than one object at once can help too.

It’s TTYT3D Silk Rainbow PLA filament. Probably not the strongest, but I had some left over after printing other toys so I figured why not. It doesn’t like to be printed super hot.

I've been using this TTYT3D Silk Filament, and it's been doing pretty well. Color shifts relatively slowly if you're doing one small thing at a time, but can be dramatic if you're doing large prints or multiples.

Will see if this works :

Printed the springy rabbit at 75% height and got almost two colors per rabbit.

I was gifted this one

That’s why I was wanting it, the colors change so quickly. I believe it’s this one- [link]

I've tried a few including sunlu, and they are both currently unused because I've reached what is best described as the color of poop and I can't bring myself to throw away 20m of filament.

What you should get is filaments described as fast gradient/color change.

It is expensive, but the best I've found is this which is described as 3-5m color change [link]

I bought it off of Amazon. It's got mixed reviews but I haven't had any problems with it: [link]

What's ironic is I bought it because of another reddit post here where they listed what filament they used for their project.

This filament has been great but I found that its able to print some colors at 200c but
fail with the darker colors which require 205 so I just set it to 205 for long prints. YMMV

This sticker makes me want to have someone 3D print an AR lower with this material.

Also if you just search silk rainbow it should work too

This is the one I've used for small prints. [link]

Yes, it's PLA. The link below is where I got it:

I've had good luck with this filament. Depending on the size and infill of what you're printing, the quick color change works well.

Don’t be jealous! Get to printing:

I had never heard of TTYT3D before, but I’ve used the gold, silver and copper PLAs, and they all look great!

Edit: looks like the copper isn’t available in the above link. Amazon must have ran out. This combo pack of silver, copper and gold. it’s $40, but comes with 3 0.5kg rolls. As I say, give it a shot. It’s some of the best PLA I’ve ever used. Like Hatchbox good. I hope your experience is similar.

I have had a MK3S+ for about 3 weeks now (assembled from their kit) as my first 3d printer. Assembly was straightforward but lots of steps and a full workday to get to the point where you can start printing stuff.

It also has not been completely issue-less for me. It took a while to calibrate extruder height with live Z adjust (I had to re-adjust because live Z-adjust was over -2 mm) and found the process to adjust height was relatively painful. I've had ~5 of 30 prints have significant issues. Three times it was x-axis shifted slightly a couple millimeters at some random point in the print (including once after I had printed a 3d guide) and once where the rainbow silk PLA I was using stopped coming out mid-print without being detected (and continuing to move around like it was printing for several hours without filament coming out). It was relatively straightforward to fix and get going again and probably more the filament or my fault than the printer. Also one time the amazon basics filament came out really crappy in a segment of a toy (sort of like if I took a soldering iron to burn some plastic).

Again, I am new to 3d printing and possibly just need to find optimal spot for temperatures for each brand of filament (tried three brands of PLA - Prusa, the aforementioned rainbow silk with the most issues, and amazon basics and one brand of PETG).

It's this one. A friend got it for me as a Christmas present. [link]

This is the TTYT3D rainbow filament. [link].

I did 20%. If I did it again, I would go higher and do 30-40% with tree supports instead of traditional supports. The extra infill adds a bunch of time, but I think it would be worth it. Switching to tree supports would help offset some of that extra time too.

Learned a bit trying to get the print right. It was a request from a relative who is okay that it's not perfect. If I printed another one, I would do more infill since this model is a bit too fragile at the joints and I would use tree supports since traditional supports are a bit too hard to remove. Still had a lot of fun tinkering.

Here is the filament.

Here is the STL.

I got a VERY similar color with this filament myself, if that helps.

this stuff is great

If you like rainbow silk, I'd recommend trying this stuff too:

It changes color every 5 meters instead of every 15 meters so you can get faster prints, and less wasteful amounts of infill, but still a full rainbow. It's a win-win-win.

Also, there is an easy fix for the blobs. Set z-seam location to user specified, and set it to the back. You'll get a scar of z-seam all along the back, but it's the back, so who cares, because then the front will look great.

That is Silk Rainbow PLA from TTYTA3D. The more you print with it the color gradually changes. Very cool for taller prints.

A 10-pack comes with this filament. The filament itself is very nice for larger prints where you get good bands of color. You could consider it a free roll of filament with your purchase of nozzle cleaning needles....

That being said, you could buy a big bag of replacement nozzles, they're dirt cheap, and replace rather than clean, unless you're finding the need to clean it out frequently.

Really? Searching "multicolor pla filament" comes up with a cornucopia of options.