What is reddit's opinion of Smart Mouse Trap - Humane Mousetrap?
From 3.5 billion comments
As an Amazon Associate I earn from qualifying purchases. 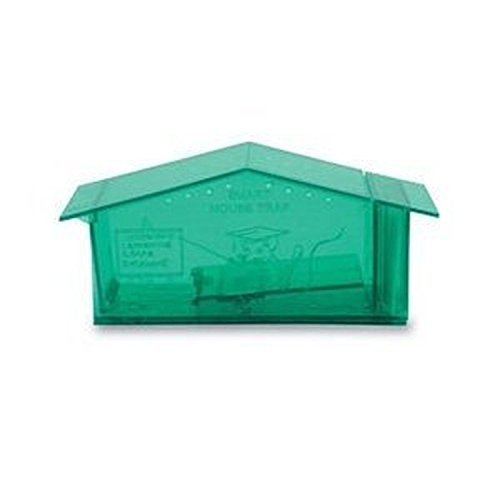 This product was mentioned in 16 comments, with an average of 1.25 upvotes

Most traditional mouse traps will cause suffering and death. If you want to look for alternatives, here's a humane mouse trap that lets you catch mice and release them somewhere else. There's also non-poisonous mouse repellent, which you can google or search for on Amazon.

This is the trap I used. It's not sensitive enough to go off like it should. But I weighed it down with rodent food pellets. So then his weight added to them set it off.

Hey for next time they have these no kill traps that put a piece of cracker where an escape door is.

We caught three mice that way. If you wait too long (as in your case) the mouse would eventually eat the cracker and be free once again.

PLEASE get a HUMANE mouse trap! They are cheap, just as effective, and they DON'T KILL THE MOUSE.

I have this product, and successfully de-moused my home of 5 mice. I just let them out down the road in a corn field.

Get a reusable humane mousetrap, and make sure you take them for a 5 mile car ride at least before you let them go. I use this in a visible place, so i know when I've caught something. It works great, and I've had it for years.

Once you think you've caught them all, you also want to patch all of the holes both inside and outside to help prevent future infestations.

Never let rodents run around your house though. They chew wires which can set your house on fire.

I know that rodents are often seen as pests, but there are humane options out there. Everything else promotes suffering and it's really not necessary. I bought the Smart Mouse humane mousetrap on amazon and it worked like a charm, catching multiple mice a day: [link]

You don't have to touch the mice...just check the trap every couple of hours and reset when necessary. Drive them down the street and dump them in a different neighborhood. You and your girlfriend can live guilt-free that way. And the only way you're going to keep them out of your apartment is by finding how they're getting in and stuffing the holes (the Smart Mouse has directions on how).

If we were talking about a puppy infestation all of the other options would appall the majority of people. That's how I feel about buckets full of water, glue traps, and snap traps. Good luck!

I've had great success with this humane trap

There are some great humane traps on Amazon. I have used these 2 and they have worked great. I just transfer the mice to a bin and drive them out to the woods.

Here is also a Youtube channel that discusses many different types of traps and provides a lot of good information.

Mine were Russian Dwarf. It is possible it squeezed out below the front door but not guaranteed. You're doing all the right things, I am sorry your roommate doesn't feel like helping in any way, that's terrible. Just keep doing what you are doing, they are so tiny they could fit in anywhere. It's challenging. The no-kill traps worked for me and you might consider purchasing one, you'll need a small one, like this. There is even a double pack so you could set them up in a couple different areas.

If doesn't work try this:

This last year, I looked after my parents' house while they vacationed in Florida for the winter, and I eventually discovered that they had a pretty big mouse problem. I saw one scurry by the fireplace, then another one peaked out at me from behind the couch, so I knew there were quite a few more that I hadn't seen.

I wanted to get rid of them, but I didn't want to kill them because I'm a massive pussy. So, after a few tries with my own ingenuity that produced mixed results, I purchased a few of these traps.

They worked great, and I caught mice like gangbusters. The problem was that last winter was pretty brutally cold and snowy, so I didn't want to catch live mice just to kill them by dropping them in below zero temperatures. So, I got a little terrarium to store them in. I eventually caught 8-9 mice, and loaded them all in the terrarium, feeding them nuts and seeds. I also put in some saw dust to absorb the mouse poo and pee and to diminish to odor.

One day when I came back from school, I didn't seen any activity from the mice. I got closer and saw that those little motherfuckers had dug a hole in the top of the terrarium and like 4-5 of them had escaped. I duct taped the hole shut, and kept using the terrarium until it rose above freezing.

I would dump them at a park a few miles from my house. I eventually chucked the terrarium because despite the saw dust, a few dozen mice can leave a real stink.

I caught somewhere between 13-18 mice (give or take the ones that escaped) throughout the winter. They were all catch and release; I didn't kill a single one. However, by the seventh or eighth mouse, I began to stop caring whether they lived or died. It eventually became a chore, and my unwillingness to kill them became more of a pain in the ass.

So, to answer the question, just OP should load the mice in a jar or something they can't easily escape, and dump them at a park or near the woods that's at least a couple miles from any homes or businesses... Or kill them. Whatever.

=( I like the catch-and-release mouse traps since the snap ones don't always kill as humanely as planned. [link]

Or try this instead...

You could get a humane trap.