What is reddit's opinion of Spyderco Civilian?
From 3.5 billion comments
created by @mouseofleaves 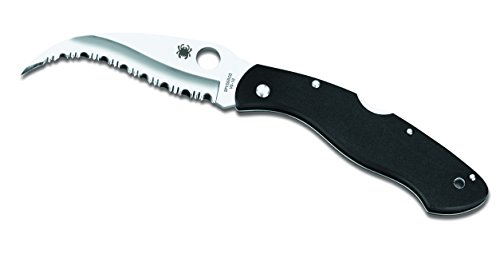 In my opinion, for the average Joe with no knife fighting or combat arms training, it doesn't get better than this knife.

The natural, slashing motions you'll make in a time of panic are what this blade was designed for. Like I said, anything you catch with this knife will zip open like a duffel bag.

Look at that blade and think about what just the tip would do to a cheek, much less a neck.

It's not good for stabbing, but that shouldn't matter that much in an actual self defense situation and spyderco themselves tell you in an instruction sheet in the box that the knife should not be used for cutting anything else. No paper, no cardboard, no tape -- this shit is for ripping open flesh only. The tip is extremely thin.

If you want to be truly masterful, you'll take a Dremel and cut an opening into the thumb hole to create a hook that opens out towards the blade tip. This hook is called a "wave" and can be used to instantly open the knife as it is pulled from the pocket. You simply pull up and back against the corner of your pockey and the wave catches and opens the blade as you draw.

Spyderco implemented this feature on the smaller version, the Matriarch, but you can make your own on the Civilian with a Dremel like I said.

I like the spyderco civilian, [link] it actually has a training video [link]

There are, however, knives designed to be highly effective in self defense with minimal training, and they're nearly useless for normal pocket knife tasks. These knives are to normal pocket knives as pepper spray is to hot sauce. Yes, you can blind someone with hot sauce in some hypothetical scenario where you're attacked at a chili cook-off and all you have in arms reach is a bottle of sauce, but you don't go carrying around a bottle of "self defense hot sauce." You carry pepper spray, instead.

One such knife that gets a lot of positive feedback is the Spyderco Civilian. The accute tip, aggressive serrations, and curvature of the blade make it especially suited to cut through clothes and flesh, and it's designed to be able to quickly stop an assault by severing an assailant's tendons, muscles, veins, and nerves, making it biomechanically impossible to continue the assault instead of hoping they are deterred by pain.

Some knives which operate on the same basic design concept are the Spyderco Matriarch (smaller version of the Civilian), the Cold Steel Black Talon II (currently on backorder), and the Ka-Bar TDI (not a folding knife, though).