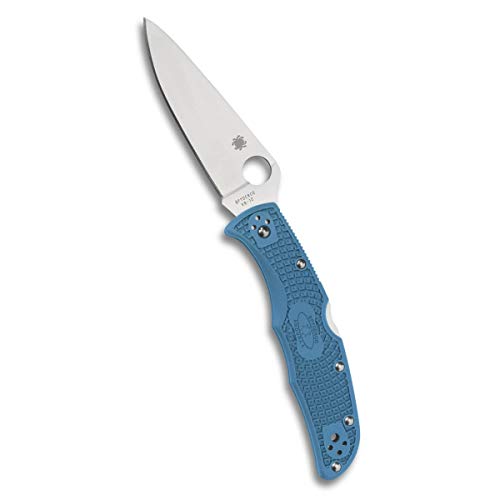 This product was mentioned in 9 comments, with an average of 1.11 upvotes

I carry around a pocket knife. And I keep it sharp. This is something I was doing as a guy that I have no plans to stop doing. It's really convenient for many non-combative reasons and it makes me feel a bit more secure in situations like this. Sometimes when I'm in a scary part of town I'll keep my hand on it.

It keeps me handy and badass, too. Everybody loves it when somebody has a knife when it is needed. I love the idea of being a girl who whips out her knife! Happens at least once a week, or constantly at work. The one I have is green and cute, but razor sharp, durable and efficient. I've been thinking about getting its smaller counterpart in purple for when I want or need it to be smaller.

Spyderco Endura is an excellent option for food prep.

Has relatively long and thin blade with FFG made from a stainless steel (VG10).

I have a blue Endura 4 I'd be willing to part with. Clip is missing a tiny little paint, but steel and scales are perfect, as are the centering and lockup. Interested?

What is your intended use for it? As an EDC knife I think it's not very good. The handle is a bit too thick for my tastes. The hollow grind clip point blade makes it more of a tactical blade. I am not a fan of a combo edge, especially on such a short blade (<6"). Like OldMan said, the 'patent pending' groove on it is pretty crappy too, get a Benchmade Triage if you want a quality cord cutter. The AUS 8 steel, isn't a bad mid-end steel, but for 10$ cheaper than you paid, you could have gotten a Spyderco Endura 4 FFG which has VG-10 steel and has a blade shape TONS better for an EDC blade (can also use a tactical in a pinch). The clip on it, as others say, is pretty awesome. It's one of my favorites.

If nothing else, the Trident does look pretty cool. I'd buy it as a collector just to look at, but I doubt I'd ever use it as an EDC blade.

If your looking for something with a left handed frame or liner lock they do exist but your going to be paying a high price for them. A lefty sebenza costs $400 and those high end knives will feel like they are built specifically for you, But there are plenty of ambidexterous locks as others have mentioned like a back lock or axis style lock.

Keys, knife (Spyderco Endura), flashlight (Streamlight MicroStream), gun (S&amp;W Shield 9mm), and if my EDC belt pouch counts as one item then that. Or my wallet.

All Spydercos! This beast has been on my wishlist for a while.