What is reddit's opinion of StarTech.com 2m USB to Type M Barrel Cable - USB to 5.5mm 5V DC Cable - USB to Barrel Jack 5V DC Plug (USB2TYPEM2M)?
From 3.5 billion comments
As an Amazon Associate I earn from qualifying purchases. The following content includes affiliate links for which I may make a small commission at no extra cost to you should you make a purchase. 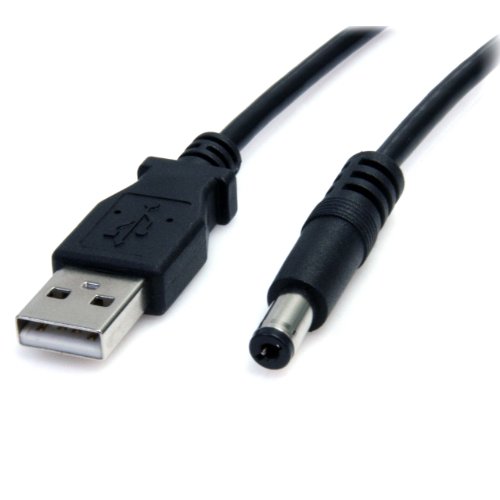 We used to sell those barrel plugs at radio shack (they're all gone from my area). Thing is, they come in dozens of sizes, but basically you want something like this: [link]

I also found this listing for that speaker that has the cable still: [link]

It's probably something like this, but you'd have to measure the diameter of the connectors to be sure.

No I hear you, no offense taken. First let me say that since you referred to the 2A rating I though you meant the standard barrel jack, which isn't what's on the end of that laptop adapter you linked.

But for the standard barrel jack, basically, two reasons that it's different than the laptop adapter plug: first, because someone like Dell or HP is able to control the manufacture of both the barrel jack receptacle and the jack itself, they can specify spring materials and spring forces that actually work out.

The fact is, 90% of the time, you actually can put 10A through a 2A barrel jack, and it's fine. But the problem is that every hundredth time you plug it in (or whatever, you know what I mean: infrequently but eventually) some tiny piece of surface oxide/crud gets stuck between the contacts, and it dissipates 10x higher power than it normally would, and it melts. That 2A rating isn't really a typical rating: it's a worst case rating. Typically even with a crappy barrel jack you can get away with way more than 2A. But eventually it tends to fail.

But far more importantly, that's not a standard barrel jack on that laptop connector and the spring contacts are in a completely different place.

The barrel jack we're most familiar with uses a spring in the receptacle to contact the outside of the barrel plug: and then it uses either a tuning fork spring contact inside of the plug to grip the center receptacle pin (like this one). You can see the two tips of the tuning fork just visible inside the black plastic. The tuning fork pinches the central pin basically. Or else it just uses the barrel receptacle spring to press a solid interior sleeve against the solid central pin like this one. In the first case, that tuning fork spring is really not very large, so it generates resistive heat and can't really produce that much pressure, and neither of the metal parts (the spring nor the central receptacle pin) have great heat rejection. They're just too small. In the second one, well this is the traditional method and it just plain sucks. You have these two cylindrical metal surfaces (interior of jack and central pin) pressed against each other with low force just because that external receptacle ground spring is sort of pressing the whole barrel sideways, so there's not enough local contact pressure to wipe the surface clean. And that force is applied in a way where if you wiggle the plug in the right way you can actually get them to separate, arcing and screwing up the surface finish. Terrible.

The laptop jacks, in contrast, have both spring elements in the receptacle. First, in case you didn't see this (took me years to notice), the laptop jacks are actually three conductor jacks. That central pin in the laptop plug does NOT conduct power. That's the current limit resistor/current limit signal wire. Just tells the laptop how many amps it's allowed to draw before the supply becomes unhappy (it's how they can make lower wattage travel adapters and still have the laptop work correctly).

The actual power conductor is the interior surface of the jack, like the traditional barrel jack, and the ground conductor is the exterior. That's so far actually no different than what we talked about with traditional barrel jacks. But the thing is, because the interior conductor of the laptop barrel plug thing is so large in diameter, the receptacle of the laptop has room for interior contact springs. So not only does the barrel have multiple receptacle springs touching the outside, it now is big enough that the receptacle can have multiple springs touching the inside of the barrel too. Looking at the image on the first post here each of those little rectangular holes on the receptacle is a cavity that holds a spring contact element. So in that case, they have four springs touching the outside, and four springs touching the inside. Not only do the multiple springs increase the current carrying capacity but they're redundant, so if a piece of crud gets stuck under one of them, there are still three that work. Contrast this to the normal barrel jack, where in the worst case, there is a single spring connected to the outside of the barrel, and then the interior of the barrel is just sort of pushed against the central pin along a single line of contact. Any single piece of crud in the wrong place, and melty melty bye-bye.

So hopefully that helps you refine your searches to look for the higher current rated laptop three-conductor barrel jack, which should work fine! Sorry for any confusion.

Probably a barrel to USB cable to run of a USB charger. Something like this