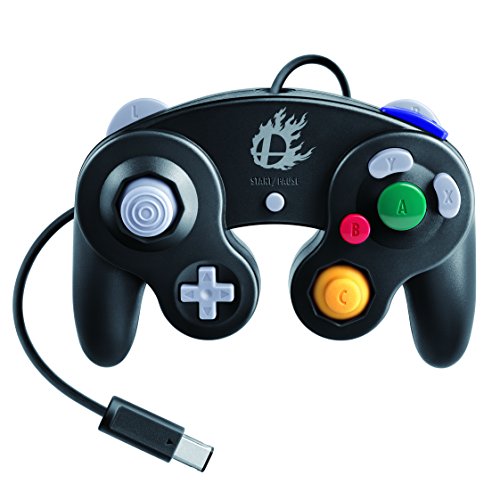 This product was mentioned in 21 comments, with an average of 0.81 upvotes

They already used the term "Super Smash Bros Edition" for the ones released during the WiiU era, here. So now they're calling the new ones, "Super Smash Bros Ultimate Edition", in order to differentiate the two.

I have the adapter you are looking at and highly recommend it. It works great for both Wii U and PC emulation. Never had any issues with it not working or breaking. Although those controllers look awfully shady. A good GameCube controller is hard to come by for multiple reasons. I'd recommend going to an older game store that has classics and see if they have any original GameCube controllers to buy used in decent condition or asking friends you know. If you cant find any that way I'd recommend getting the smash 4 ones from Amazon found here:

I know its pricey but it is way better than 3rd party controllers if you are trying to be competitive at the game.

This is honestly the nicest thing I've ever seen someone do on reddit, thank you so much kind stranger!

I would like this because I have recently gotten into smash bros with my friends, alas I do not have a controller, nor do I have the money for one, and I would greatly appreciate it.

Again thank you so much for the contest, I hope to one day be able to do something similar!

Just buy a smash 4 one brochacho.

They have much better build quality, though many serious melee elitists prefer the original controllers

Apparently the adapter is out of stock again on Amazon so I can't give a link showing the $19.99 price, but seeing that the resellers are selling them at around $40 and not the usual $80+ that's a good indicator that there was a recent influx of stock.

If proof is needed about restock, I can easily take a photo of my Fry's receipt when I get home from work.

There are usb GCC, but they are very unreliable because it's not an official Nintendo controller. The best thing for you to do is buy a nintendo GCC and a mayflash adapter.

Edit: You might be able to get a controller cheaper than that, I spent $30 on mine about 2 years ago.

Are you sure? [link] if you check that and zoom in on the middle and the top it kind of looks like its clear maybe

Interesting. Original generation GCN controllers only, or does that work on the re-releases and the GCN-likes as well?

The Smash 4 controllers are literally just GameCube controllers, if you're looking to buy something brand new.

Is there a difference between

Why is one slightly cheaper than the other?

Hey, thanks for answering. If I buy these two: [link] [link]

About how much lag will I have?

Yeah there's some awesome rare ones like the Crystal Chronicles model that go for even more. From what I hear though, even these are decent.

Ebay is a great choice

Those are the Smash 4 ones.

That is the newer white controller.

Generally, the only differences between the old controllers and these ones are slight differences in the feel of triggers-- personally I don't like the Smash 4 ones. I do think the white controllers are an improvement, though.

Amazon already has it for preorder along with the adapter, as well.

Just an FYI they have controllers available on amazon right now. No adapters though.