What is reddit's opinion of The Complete Ante-Nicene & Nicene and Post-Nicene Church Fathers Collection: 3 Series, 37 Volumes, 65 Authors, 1,000 Books, 18,000 Chapters, 16 Million Words?
From 3.5 billion comments
Created by @mouseofleaves.
As an Amazon Associate I earn from qualifying purchases. 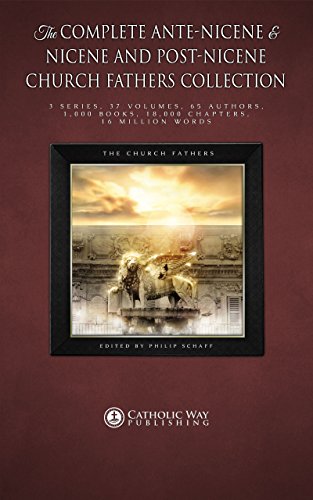 This product was mentioned in 12 comments, with an average of 1.17 upvotes

In the meantime, while you save your money for the entire collection in print, you can get the Amazon Kindle version for $4. I got it a long time ago, and it was one of the reasons I later converted to Catholicism. So, I am very pleased with my purchase.

It is on Canadian Amazon, and I'm not sure out of country sales go. I hope that you are able to purchase it.

Slightly more than 'free' but this collection is pretty much enough for a lifetime, if you're interested.

You can actually get all the church fathers, pre, Nicene, and post for free somewhere, I've got it downloaded onto my computer... I can't seem to find the link any more. Sort of archaic translation, but still pretty good

it's 2 pounds now, or whatever that is in your local currency. Still pretty good

Thanks! I don't particularly like reading for long durations of time on the Kindle. Albeit, there is this collection for the kindle, which looks pretty nice.

But, I'd prefer to have a hardcover collection over a digital one.

For a few bucks you can get an ebook version of Schaff's massive anthology of all the Church Fathers in English translation on Amazon. The translation is a bit dated, but this is an amazing value if you want to have all the primary texts on hand without having to individually search for them all on the web. I also really recommend picking up Michael Holmes' translation of the Apostolic Fathers. It's amazingly readable and the introductions are very helpful.

As far as getting into patristic theology, I highly recommend J. N. D. Kelly's Early Christian Doctrines. Christopher A. Hall also has a nice collection (four volumes) of topical books on the church fathers (Theology with the Church Fathers, Worshiping with the Church Fathers, etc.). And while I haven't read it yet, Robert Louis Wilken's The Spirit of Early Christian Thought looks pretty cool and is on my to-read list.

^((A reminder that individuals will sometimes be incorrect, but also that some things which seem wrong, baseless, or absurd on the surface are often built upon a context of which you may not yet be aware, and that most elements have multiple, valid layers of interpretation. Make use of multiple resources together in parallel for a more holistic perspective.))

I'd absolutely second u/mmp2c's recommendations to read some of the other early christians. the mainstream christian world refers to them as the "Early Church Fathers." As u/mysterious_savage noted, you'll get a variety of views (though they all identify themselves as "catholic" in a sense), but you'll actually be surprised at the amount of harmony you'll see too. Ignatius of Antioch's letters are great, especially when you consider they were written basically contemporary to the Johannine works in the NT. I'd also recommend reading Clement's letter to the Corinthians, most likely written around the late 90s CE. It'll surprise you. Same goes with The Didache. It's a first century teaching manual that was used for new converts. Notable things for people with LDS backgrounds are bits on how to deal with prophets and proper modes of baptism.

edit: this site has a good collection of writings from the early fathers if you're interested. Or, if you want them in a kindle book, here's a massive collection for $3 on amazon

If you want to learn more about the Church Fathers this is a great resource. The actual book collection is worth several thousand dollars, this Amazon e-book is only four dollars. It has been a resource I'm glad to possess, it contains all the extant English translations of the Church Fathers from Saint Barnabas the Apostle to Saint John of Damascus (as this is a Roman Catholic publication and the Roman Catholic Church cuts off the age of the Fathers of the Church. In the Orthodox Church, we still believe in modern day Fathers of the Church, here is a list of the Fathers.

>Veneration of the saints. What does that mean? Do you burn incense or something like that to saints? I actually have read stuff in the confessions that goes against the doctrine of burning incense to saints.

The veneration has nothing to do with burning incense. If Orthodox Christians do burn incense to Saints it's a private practice and it's because incense represents the prayer of the saints. The veneration of the Saints is as old as Christianity itself. From the first century, we have inscriptions on the tombs of Martyrs asking various requests. Many people wanted to be buried next to Apostles and Martyrs with the belief that they would receive the prayers of the Saint which would be efficacious to deliver them to heaven. And so our veneration of the Saints is primarily based around their continued ministry of prayer.

>I don't know what the veneration of Mary is, and I am hesitant because I have been conditioned to believe what is going on is similar to idol worship, but I don't know what actually happens so I do need to be walked through that. For Mary, I can't fight the sinlessness doctrine anymore because "who can bring a charge against God's elect" (Romans 8:33) but I don't see any evidence or need that the doctrine of her ever-virginity, unless you believe sex is sinful, which I don't cause what God makes is good and sin is not good and God made sex. The Virgin birth is necessary, but I still can't find reason for the ever virginity. I think it is false personally, and I hear that alot of the early church fathers disagreed about this so I don't think you can shoot down my opinion as a recent invention. I also don't think Paul was saying James wasn't the actual brother of Jesus in some way, I don't think he was saying James was his cousin

While in the Roman Catholic Church (with reparations to the immaculate heart for blasphemies and the brown scapulars promise of forgiveness by the Virgin Mary) veneration of Mary does absolutely reach the level of worship, not so in the Orthodox Catholic Church. Mary did give flesh to God the Word, so that's very special and unique and she is a very holy woman, the boast of all creation.

While Mary's sinlessness is not a doctrine in the Orthodox Church like it is in the Roman Church, everyone believes it, but while the Roman Catholics believe that Mary was purified of her sins during her conception, we believe, with Saint John Damascene and all the Fathers before him that she was purified during the Annunciation.

But your right about the brothers of Jesus. That's the Roman Catholic View, that the brothers of Jesus are cousins, because apparently there is no Greek word for cousin, except that's not true, There is a Greek word for cousin, and the Scriptures don't call Saint Elizabeth and Saint Mary sisters, they are called sisters. The Orthodox Catholic view is that Saint Joseph was an elderly widower who got chosen by God to marry Mary, who was a temple virgin at the time. The brothers of Jesus are his half-brothers from Joseph's previous marriage. That's why his father isn't mentioned by the time of his ministry, his father died when Jesus was still (relatively) young, because Joseph was already in his old age.

>As for communion, why do you use leavened bread? It seems kinda, wierd. What's the basis for that?

Three things, because we're not Jews, and because just like Jesus was risen from the dead, so the yeast rises the loaf. Also, just as the yeast raises the loaf, so when we partake of it, Christ raises us up and bring us into unity with the divine. We are less concerned with trying to recreate a past event as we are trying to join in with an event that is beyond space and time.

I hope that I was helpful, do you have any other questions?

In the Orthodox Catholic Church, we alone have "contend[ed] earnestly for the faith which was once for all handed down to the saints (Jude 1:3)." And we have kept it without addition or subtraction. We obey Saint Vincent of Lerins who stated, "all possible care must be taken, that we obey that faith which was believed everywhere, always, by all."

This Is what I have. I don’t know where or how to begin.

I own this e-book it cost four dollars for priceless treasure.