What is reddit's opinion of The Complete Malazan Book of the Fallen?
From 3.5 billion comments
As an Amazon Associate I earn from qualifying purchases. 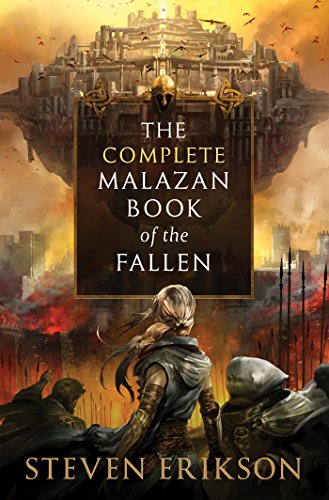 This product was mentioned in 13 comments, with an average of 5.15 upvotes

At over 10,000 pages, this is probably the longest, most complex, richest fantasy series ever written. Tons of characters, god, cultures, and plot lines with some of the most detailed world building ever created. It’s a monumental journey to read all 10 books, as they’re not light reading, but if you’re up for it, they are almost universally acclaimed.

The Complete Malazan Book of the Fallen [link]

95% of the time I prefer physical books, but not with Malazan. I found myself flipping to the dramatis personae/glossary/maps/ CONSTANTLY. This would've been a serious hassle with +1,000 page books, but as an ebook it's a tap away via bookmarks.

Plus there's a really good deal ebook wise where you can get all 10 books in a single "cover". Here's an amazon link if you're interested :)

I had this same dilemma when I started. Got the first two books in paperback because a) well I just like the feel of the book, and b) felt like a series like Malazan would need flipping back and forth etc.

But ever since I finished DG, I've read the rest off of my Kindle and it's been great!

Jeez Entire series for 90 dollars only on Kindle. Thanks for the recommendation, but I need to find an inexpensive way of reading this.

I find I just check Amazon. There are a lot of authors I found that I found with books with no DRM. Google Play as well where different publishers can be found publishing books some I've found with no DRM. I also check Humblebundle and Storybundle sometimes I find things there I want to pick up.

One example of something with and without DRM is Steven Erikson stuff. Most seems to have DRM but here's his entire series on Amazon without it. Glen Cook's Black Company books have no DRM. Frank Herberts Dosadi Experiment. Michele West's House War series is hidden on Amazon with a 2nd publisher without DRM. John Scalzi's Old Man's War series also has no DRM.

Granted all that is fantasy/SF but you may find if you dig around there is a bunch. If you like Fantasy/SF and you don't mind things a bit rough around the edges there are web novels as well you can find on Royal Road an other places though most are in similar styles.

Another note that may be less helpful. Things labeled with '

This is the only complete set you'll need

this is what I mean

Which one did you buy? theres this [link] and buying each of them individually.

Is this version any good?

The Malazan Book of the Fallen is the main series with 10 novels written by Steven Erikson.

The Novels of the Malazan Empire are the side novels written by co-author Ian C. Esslemont (ICE for short) and are complementary to the main series (though Erikson says they hold just as much weight to the series as his own)

On the Amazon Kindle store, there is the Complete Malazan Book of the Fallen that has all 10 of the main novel series. Otherwise, there's no box sets or anything, each book is bought separately.

There is an ultimate reading order that includes ICE books and other Erikson novellas as an option. But I suggest only reading the 10 novel main series first because it's really long and a re-read is awesome.

If you have a Kindle, you can download the Fictionary for the Malazan series which is a custom dictionary for Malazan universe words.

Read this author's preface if the version you buy doesn't have it, to know what Erikson's intention and ambition for writing the series.

It's a huge world with a lot of characters and events happening all over the world. You'll feel like you just got attached to a group of characters and then forced to jump to a new set of characters. Happens every novel, sometimes several times per novel. Don't sweat it or feel stressed. It's necessary for the large scope of the series. But as large as the scope is, there is still a story everyone can follow. Enjoy it for what it is: an awesome Fantasy series!

I spent $80-ish on the Malazan Omnibus over a year ago and have still put it off. I have read half of the first book three times, but have never been in the mood to get so "involved" as to read all 10 books.