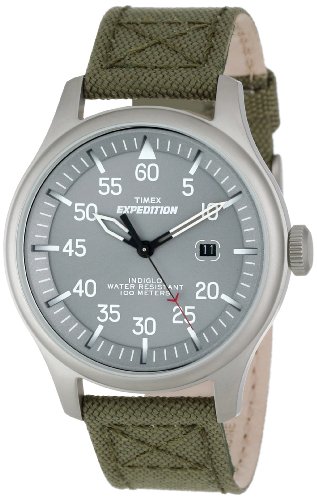 This product was mentioned in 8 comments, with an average of 1.13 upvotes

I'm looking for this Timex Expedition Military Field watch in particular, and all the reviews I've googled say it's like $45 USD. However, on the amazon link, and several others, it's about $150-200. I think it's been discontinued; is it normal for prices to jump like that? I can't bring myself to spend 3-4x the original MSRP. What options do I have?

I didn't realize it was unavailable, I originally got it from here and took off the other strap

Looks like a well worn stock band that comes with the Timex Expedition Military Field.

I almost bought another, they're still on Amazon. I'm on mobile, sorry for the formatting but here's a link [link]

Anyone know why the code doesn't apply to the Expedition Military Field Watch?

There's not much reason to go with a mechanical if you don't think your friend would appreciate one. They're more expensive, less accurate and need re-setting way more often over a quartz.

Of that list I'd recommend the Timex. It's a solid enough, good looking and versatile watch with a couple of colour options, all at a reasonable price. Though if I were buying for myself I'd pick up one of the Expedition Military's.

Lots of places carry them and you shouldn't have any trouble finding one for under $80 including shipping.

I too keep my EDC in a micro pocket and quite like it.

I somehow fit a Tide pen as well as a Sea to Summit T6 cutlery set.

But dude, you're getting a TON of nice gear, but you like ruin it with the watch.

If you can afford it, get this Timex with a nice NATO strap or the Chums "The Band" strap.

If you can spring the extra cash, go for this Timex

You won't regret either watch, I have both and couldn't be happier, however I'm a bit more of a fan of the T49905 because of its black casing.

Also don't go the Tacticool-Wanna-Be-NAVY-SEAL-My-Daddy-Is-A-Lawyer route. The SEALs don't use this Luminox and just because it's labeled as Navy or Marines doesn't make it the best or cool.

I will also suggest a copy of the Pocket Ref as well as a small iFixit screwdriver kit.

I purchased the big kit and keep the small screwdriver and a custom set of bits: