What is Reddit's opinion of ToiletTree Products Oral Irrigator By Poseidon Portable and Cordless Water Flosser (w/Rechargeable Batteries)?
From 3.5 billion comments
As an Amazon Associate I earn from qualifying purchases. The following content includes affiliate links for which I may make a small commission at no extra cost to you should you make a purchase. 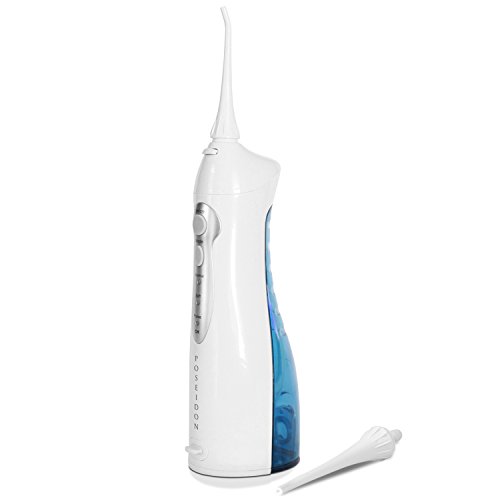 Have had one of these for 2 years, still going strong. Was looking for the same things as you, with the emphasis on the smaller footprint. Impressed with the battery life and my wife uses it as well. We’ll leave it off the charger for a couple weeks at a time. Its cheap enough you could get a second one if you wanted.

My dentist raves about them, and since the floss isn't super effective with all my work, the waterpik is MUCH more effective. I got this one, and even though it came with an EU power supply by mistake, I emailed the company and they sent me the US one for free immediately. The WaterPik brand is really good too, but I can't afford $80+ right now.

Flossing is bananas with all this metal in my grille! LOL

I love water flossing and I will never go back to using string.

I was not a flosser -- now I floss every day. Easy, simple, enjoyable. Should have invested in a water flosser years ago.

Compared to string flossing, the water gets more gunk out, too.

I have this model but I would go with a Water Pik or Hydro Floss next time. The one I have has one design flaw: the tip where the water comes out isn't slightly pointed so it is difficult to point the stream directly between teeth. The tip is flat. Other than that, it's a great product.

Yeah. This is the kind that I have. It's basically an at-home version of the kind a dentist would use.

Nope, it's a space that's supposed to be there called a tonsillar crypt. The tonsil stone is just a bunch of crud that's trapped in there, as soon as you shoot it out with a water flosser the hole will shrink back up. What is just a little more worrying for infection is that there looks like there might be a little white gunk in another crypt above it, but your doctor likely checked to see if you had 1) lack of cough, 2) white gunk on the tonsils, 3) swollen tonsils that are painful when he touches your neck, and 4) fever, all of which would be suggestive of strep throat. If you just had the white gunk of those four, strep throat is less likely and antibiotics would probably cause more harm than good.

We picked up a water flosser like this: [link]

If it doesn't break the bank for you I'd say give it a shot, have someone use it and a flashlight to squirt the gunk out, and get plenty of sleep and drink hot fluids. It's probably viral and will get better soon, if it goes on another week or so or gets worse, give your doctor another call. If it swells more and makes it difficult to breathe (it probably won't), only then head on down to the ER.