What is Reddit's opinion of TSI 49740 Magnifier, 3X Magnification, 50 mm?
From 3.5 billion Reddit comments
As an Amazon Associate I earn from qualifying purchases. The following content includes affiliate links for which I may make a small commission at no extra cost to you should you make a purchase. 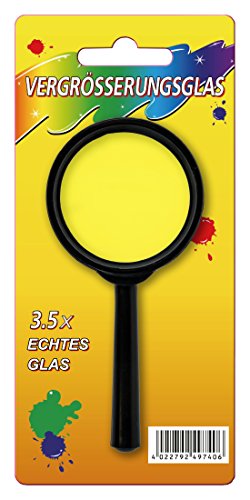 I wanted something quick and dirty to play around with, but unfortunately the OpenDive lenses were out of stock, so I ordered some 5x magnifying glasses from Amazon that showed up in the "people who bought this item" section for the Durovis OpenDive lens kit. I didn't expect them to be actually 5x lenses, and this assumption was correct, they will magnify 3-fold at max, therefore the resulting FoV is bad.

The lenses were the only part I purchased, the rest was build from trash: a cardboard box from my last trip to the super market for the case, the cardbord from a roll of toilet paper to hold the lenses and a piece of foam that was part of some packaging and some rubber bands of unknown origin.

I roughly tested the focal length of the magnifying glasses with a laser pointer to determine the proper distance from lenses to the screen, tried to measure my IPD and cut the cardboard according to some estimates without a detailed plan.

Most of the holes I added on demand to access the screen, to better hold the lenses etc.

Nothing is glued, everything is just jammed together, held by cardboard flaps and rubber bands and has a tendency to fall apart. As a positive side effect I can claim that the IPD is adjustable at any time. The magnifying glasses are loose enough to be moved, but sit tight enough to stick to their position in use.

But it works and I tested basically all Durovis Dive apps I could find, as long as my Samsung Galaxy Nexus could handle them.

As mentioned, the FoV is horrible, I'd guess 35°-40° total for both eyes combined. But I can properly overlap the pictures, for close elements the 3D effect is very visible and flying through canyons makes me sick after a few minutes.

So far this was a cardboard clone, requiring to be held by hand. I have a Snakebyte idroid controller which works with a number of apps (including the Google Earth version that is part of the Google Cardboard app), but for these I needed a headstrap. First I thought about using the rubber band from some discarded clothes, but then I simply stuck the hole thing onto a baseball cap. This is kind of cheating, since the cap would have brought the budget above USD 5, even though I already had it. So this is an extra. The handheld HMD within the given budget could have been done by anybody (in Europe or with access to similar magnifying glasses) for the same budget.

The baseball cap holder works surprisingly well and takes a lot of weight of the nose. But just like the whole contraption it has a tendency to fall apart, which might send the smartphone into a fatal dive.

And finally, as demanded, prove of purchase.

The whole building process took about 20 - 30 minutes. It became immediately clear that I needed better lenses and after checking for the OpenDive lens kit repeatedly it finally became available again for a couple of hours last weekend. It arrived a few hour ago, so a proper cardboard clone will be next.

The primary problem turned out to be neither the flimsy construction nor the abyssal FoV, but the lack of software, made worse by the lack of speed of the Samsung Galaxy Nexus I used. By far the best was the Shadowgun VR Demo which shows what could be possible. It looks great, supports the idroid controller and runs very fast even on slower devices.

This wasn't my first try. Immediately after Google gave away cardboard at Google I/O, I "created" a DIY SBS YouTube viewer in a couple of minutes based on an iPad and whatever I had lying around, including a non matching pair of lenses. If my current trashy cardboard clone counts as horrible, the SBS viewer had to be classified a crime against humanity, since it can only be used by placing it on a table and looking into it from the top, which causes neck pain after a couple of minutes in addition to the eye strain caused by the scratched lenses of different diameter and focal length. But nonetheless, it worked for the purpose it was &quot;designed&quot; for.

And the reason for this conclusion is simply software. No doubt the DK2 will beat any Durovis Dive, Google Cardboard or whatever, but these devices get close enough to the DK1 to be impressive. Unfortunately there is basically no software at all. I tried about 30 apps, most of them not available in the playstore, hardly any of them are usably due to inconsistent input methods.

In theory demos based on Unity could be ported from the Rift to the Durovis SDK, but so far only Tuscany villa has been. And due to the lack of computing and graphics power compared to a PC, the demo runs at less than 10fps for me, which causes the images to jump all over the place, making it as unusable as most Unity based demos. This might change with the adaption of Google's VR API or the Samsung VR gear, but for now any HMD besides the Rift is almost completely useless unless you are developing content yourself.