What is Reddit's opinion of USB C Cable 60W 10ft, Anker Powerline III USB-C to USB-C Cable 2.0, USB C Charger Cable for MacBook Pro 2020, iPad Pro 2020, Switch, Samsung Galaxy S20 Plus S9 S8 Plus, Pixel, and More (Black)?
From 3.5 billion Reddit comments
As an Amazon Associate I earn from qualifying purchases. The following content includes affiliate links for which I may make a small commission at no extra cost to you should you make a purchase. 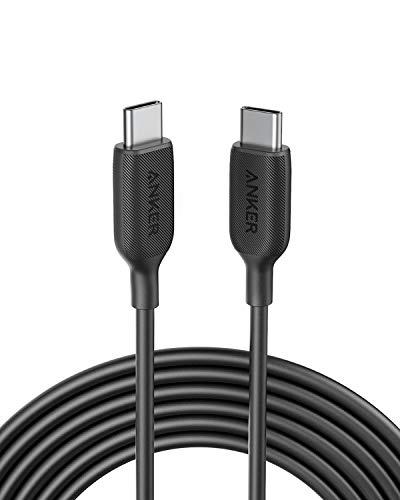 It would, but that's still very short.

This is the one oculus used to recommend. And the one I use (lot of other people use it too) Still shorter than the official simply because it's copper and not fibre optic.

They also do a usb-c to usb-a as well.

Anker is better, but they're expensive when not on sale. Only thing to keep an eye out for the max wattage of the cable. Most long ones are 30-60W.

From there I normally just look on amazon and check the reviews. Only 10ft that I've owned is this guy. Only this it that it's not braided:

I have this one, its 10 ft, and comes with a lifetime warranty.

No issues with that cable. Works like a charm. Note that more recently, also Anker released a 10ft cable. I think I’d prefer this one for my use case (traveling/on the road) because I presume it’s easier to clean than a braided cable. But the Uni cable didn’t pick up particularly much dirt, no worries.

Corrected the post above... Anker doesn't sell a 15ft USB-C. I was looking at the wrong thing.

This is what I was thinking:

But it's only 2.0 and probably wouldn't support the data transfer speeds to tether my camera...

Maybe this would be better?

Expensive, but if I don't really need the TB4 cable, I'd rather get the 15' cable for the same price. Think that's unreasonable or unreliable? I can't find much about the Nikon z7ii in terms of data transfer requirements over USB-C. It just says to "connect via USB" it's not much help:

Another expensive option I found to get over 15':

Yes it does matter, USB C is just a standard but each cable will have its own specs. From personal experience, I'm always happy with Anker products. If you need just a charge cable I would recommend this one.

I want to do something similar, make the power cord smaller and use USB-C to achieve that goal. I don't have a want to rehouse the wii though. I want it to work with any wii, even my grandma's unmodded wii. So what I've seen from the comments here and here, and formulated an idea. If I take the orginal nintendo power end that plugs into wii and solder it to the end of a cord like this, use heat-shrink tubing to cover the solder, and get a 45w brick for the wall like this, it would cut down power brick and cord size. I'm not planning on doing this for a while, but any thoughts on this idea? I've never soldered, but I'm not sure if I need a regulator to make sure the wii doesn't fry itself, like to make the cord use PD? Also, does it matter which end I remove from the usb c cord, since usb c can use either end to charge things and with phones, battery packs, etc. charge each other, depending on how the cord is flipped?

Anything from Anker.. I've used their cables and bricks for years. Currently all of my wall warts are Anker QC 3.0 and my five wireless pads are Anker (10W only) All of my Samsung bricks/cables are still in the boxes the phones shipped in. My wireless car charger is from iOttie and my wireless power bank is Aukey though.

I'm also one of those people who tries to never charge above 80% or get blow 50%, so feel free to brand me a nutjob.

EDIT 2: Links to what I keep on hand.

This is what I use with the wireless Chargers.

My Wired Car charger is apparently no longer being sold, its 54w PD and QC3.