What is Reddit's opinion of VIPARSPECTRA 450W LED Grow Light, with Daisy Chain,Veg and Bloom Switches, Full Spectrum Plant Growing Lights for Indoor Plants Veg and Flower Actual Power 200 Watt?
From 3.5 billion Reddit comments
The following content includes affiliate links for which I may make a small commission at no extra cost to you should you make a purchase. 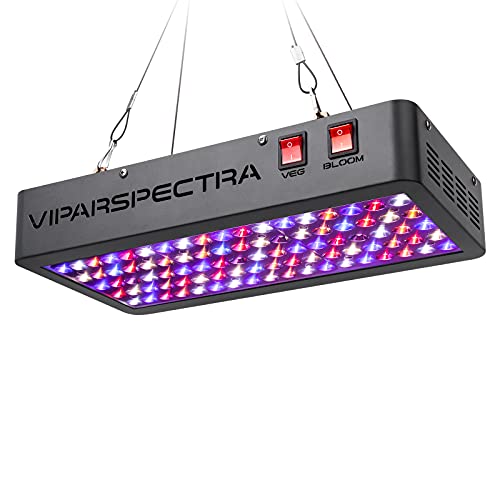 the light is one of the most important parts. Most of the lights are amazon are complete shit and not the actual advertised watts. I would highly recommend getting a Viparspectra light. I have 2 of them and my gals love them. For instance my 300w viparspectra is probably better then most of the 600-800w shit lights on amazon.

They have many different wattages but here is a 450w amazon link: https://www.amazon.com/VIPARSPECTRA-Reflector-Spectrum-Indoor-Function/dp/B015FLSOCE/ref=mp_s_a_1_1_sspa?dchild=1&amp;keywords=viparspectra+450w&amp;qid=1591998903&amp;sprefix=viparspectra+450&amp;sr=8-1-spons&amp;psc=1&amp;spLa=ZW5jcnlwdGVkUXVhbG...

Second this. I have this tent and originally used those grow lights but even at the top of the tent they caused serious light burn to my plant. I ended up keeping the tent and buying new lights which fixed the problem. Could be genetics-specific to my plant thought and it’s possible that you’re fine with the current set up. Here are the lights I ended up using instead: https://smile.amazon.com/dp/B015FLSOCE/ref=cm_sw_r_cp_api_glt_i_DS5WJRGGNYCTP2X9AA5R?_encoding=UTF8&amp;psc=1

I have the same goal so I picked one of these up, seems like it’ll do well.

First time grower here too, and I'm about a week away from harvesting. I've used this light and it's been great for me. But do your own research on lights. Google is a great help https://www.amazon.com/dp/B015FLSOCE/ref=cm_sw_r_cp_apa_glt_fabc_J1JTPZR74R6S007YMYPC?_encoding=UTF8&amp;psc=1

Sources: The amazon listing. I also had one, and I measured its watt consumption with a kill-a-watt. (It stopped working after about 10 days and I returned it.)

I currently have no set up for indoor gardening. My primary goals this year are to start seeds for transplanting to my outdoor garden, various herbs and vegetables. I received seed trays and a few other things for Christmas presents this year, but not a light. My thought is that I'd like extend my gardening season in 2019 to bring some things indoors and/or grow lettuce greens indoors year 'round. I currently have this light on my Amazon wishlist, and wanted some input before I spent that kind of money. I probably don't need something this big to start seeds with, but it seemed that this could be a light that would last me through a couple of expansions before I'd need to make an additional purchase.

I used the vivarspectra 450W for my first grow in a closet roughly 4x3. it comes with a perfect guide on where to place and which spectra to use for different stages of growth. not sure of your budget but here's a link! https://www.amazon.com/dp/B015FLSOCE/ref=cm_sw_r_sm_apa_fab_Lz7HFb2TG7X0R

I mean, ive seen people have incredible results with this light This or the 300W Nothing is forever tho. Struggle through and grab a decent light when ya got some funds.

Should be enough in a small tent. LED lights are worth not risking a cheap Chinese company from aliexpress

It has a bloom and veg switch. I used the soil ocean forest potting soil. My tent is 2x2x4

Thanks for the reply!

That depends on how he's going to use the space. The 300s will give more coverage area, but the maximum PAR value will be less (by a substantial amount), so you won't get the same growth potential. If he were to go with the 600w (that's the one I have) and hang it over say, the right 2/3 of the tent he'd have perfect coverage and PAR for that area. It's a choice between barely adequate lighting but good coverage and decent lighting but less coverage area. A compromise might be to put 2 450W LEDs in there (same brand, Viparspectra)

There are people who grow soley using cfls, and yes you would want to use 5500-6500k cfls for the veg and 2700-3700k for flowering. Some people also using 4700k for the entire grow cycle as it is pretty much equal of both blue and yellow light.

I would get an led fixture though. You could make your own but if you wanted a simple solution this fixture would be perfect for that size tent https://www.amazon.com/VIPARSPECTRA-Reflector--Spectrum-Indoor-Plants/dp/B015FLSOCE/ref=sr_1_1?ie=UTF8&amp;qid=1476124071&amp;sr=8-1&amp;keywords=450w+led

It would be possible to get 150-250g using that light in that tent as long as your training was decent.

i use one in a 2 x 2 x 5 ft area. I'm in my first grow with it but i've had 0 problems. I switched from cfl and saw an insane growth difference in a few days. no complains. i have https://www.amazon.com/gp/product/B015FLSOCE/ref=oh_aui_detailpage_o07_s00?ie=UTF8&amp;psc=1

What are your thoughts on this brand? Would it be a good fit for 2 plants in a 48x24x60 tent? Open to all recommendations https://www.amazon.com/VIPARSPECTRA-Reflector-Spectrum-Indoor-Plants/dp/B015FLSOCE/ref=pd_sim_86_4?ie=UTF8&amp;psc=1&amp;refRID=JYZSJ3YR67PE1D0FK2A9

You are at exactly 3 square feet. At a minimum you need 50 watts per square foot or 150 watts total for your space. So something like this would be fine: http://www.amazon.com/VIPARSPECTRA-Reflector--Spectrum-Indoor-Plants/dp/B015FLSOCE/ref=sr_1_3?ie=UTF8&amp;qid=1462999197&amp;sr=8-3&amp;keywords=ViparSpectra

That includes a 3 year warranty which most panels do not.

Would this light be better or too much?

I just have these on the veg setting. Is that not right?

Looks very similar to the king led I have. Again, I'm no expert, but the 450v should be more than enough to grow in your tent.

here's my post with a picture of my lights. two 450w viparspectra off of amazon. Paid $220 for the two of them. They had the best reviews for the price by far and I figured two 450w was more than enough light for my 4x2 area. I almost went with the 300w but the 450 weren't much more and I figured even if they were under-rated, I'd still have enough to grow what I wanted. Really happy with them so far after a month. Plants are responding well after they adjusted over a week. I had a really bad light before.

At the moment it is nothing simple, I have a ViparSpectra 450w w/ bloom switch hooked up to a Century Timer. I just went and bought a small circular fan maybe 6 inches in diameter at Wal-Mart and tied it up in the tent to the top vent as an exhaust. It's in a tiny 2x2x4 Tent. I have a couple clones from my outdoor grow, 2 in pot rn and a few more in a dome, all in the same tent. Not obviously going to keep them all, just hoping the pick the best of the litter.

Check out this Vipar Spectra 450W (200W actual) on Amazon. Very well reviewed and affordable. Just bought one myself for my next grow. They have a whole line if you want more wattage. VIPARSPECTRA Reflector-Series 450W LED Grow Light Full Spectrum for Indoor Plants Veg and Flower https://www.amazon.com/dp/B015FLSOCE/ref=cm_sw_r_cp_api_QfMJzb0BYTCR4

Haven't even purchased lights/tents yet, but seriously planning an indoor grow and don't know if my setup will work, so feel free to criticize all around.

Location: I plan on growing either in an attic (with good ventilation ofc) or the corner of a large, dark closet, both in a 3x3ft grow tent.

Plants: After some research on Leafly, YouTube, and various forums I have concluded that I am going to attempt to grow Wonder Woman, and I believe could grow 6 plants in that space, but 4-5 is also acceptable if anyone thinks there won't be enough room.

Light: It will be one tent (for now) so I intend on getting a combo veg/flowering LED (since money isn't a big problem and LED yields more than CFL) like this one. If anyone has any recommendations within the same price range (up to $200) I would be glad to look at and consider them.

Medium: Because there are already so many new variables for me, and growing potted plants in soil is something I'm used to, I plan on going with what I know instead of attempting a bunch of hydroponics my first few grows. I assume a better-managed soil grow would be much better than a shotty hydro system.

Also, when do we start cloning? After we determine the sexes? After harvest? Right before harvest? What lights are they kept under?

LED question here i just upgraded from cfl and I'm a little confused about "reflector" vs non reflector. i bought this Viparspectra 450w reflector series

but I'm wondering this mars 600w non reflector is a better option for the same price, and so should i return the vipar while its under 30 days or keep it?

does reflecting have that big of a difference? the vipar 450w reflector i have says it equals a 400w HPS but the mars 600w only is equivalent to a 250w HPS despite having 150 more watts

is this true? are reflectors that much better?

Glad I asked. This is the light I currently own but I will invest in some more ventilation before starting.

If you can't afford COBs and you want a cheap legacy LED panel that works, and you're only growing one plant, go with a ViparSpectra Reflector 450w. I can vouch for its effectiveness. 10w LED bulbs won't really do anything. Get 2 42w cool white CFLs just until you can get the panel. It's $149 at https://www.amazon.com/VIPARSPECTRA-Reflector-Spectrum-Indoor-Plants/dp/B015FLSOCE

You're probably looking for about 3-4 ounces minimum, for personal use. I grew two plants under one after vegging for only 3 weeks from seed and I ended up with about that. I didn't top one of them, or I'd have had more. 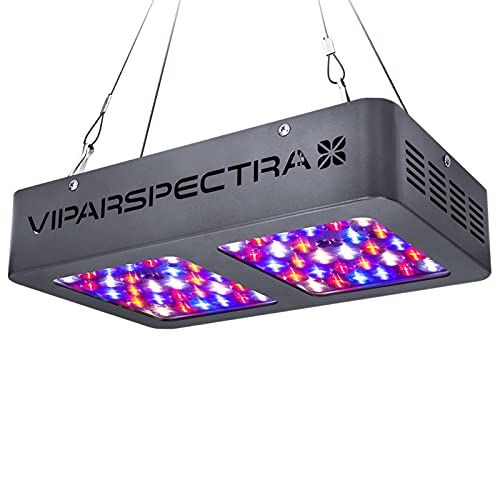 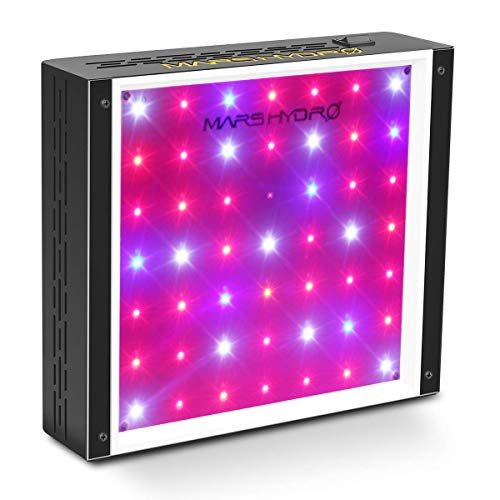 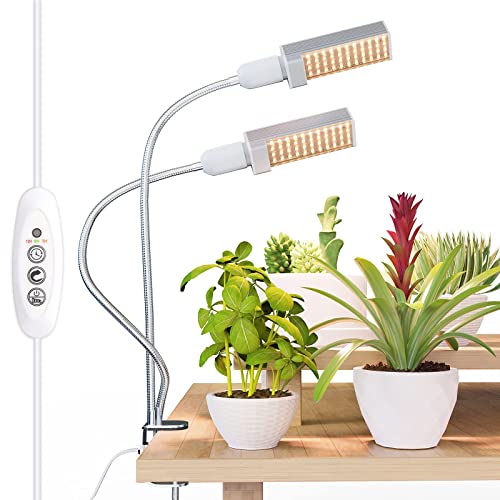 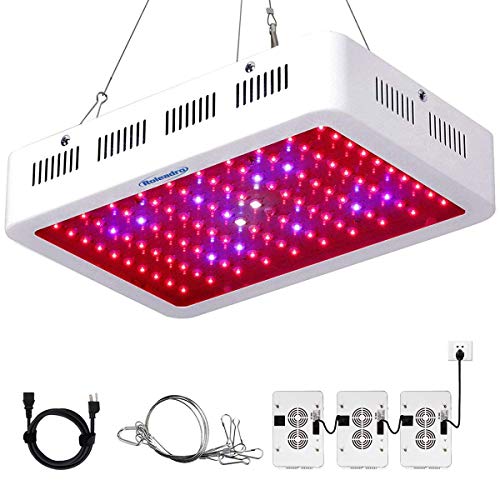 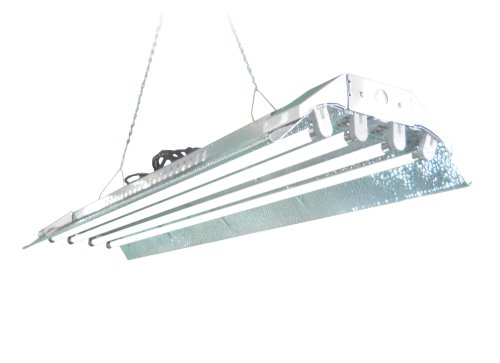