What is reddit's opinion of Vivere Double Cotton Hammock with Space Saving Steel Stand, Tropical (450 lb Capacity - Premium Carry Bag Included)?
From 3.5 billion comments
As an Amazon Associate I earn from qualifying purchases. The following content includes affiliate links for which I may make a small commission at no extra cost to you should you make a purchase. 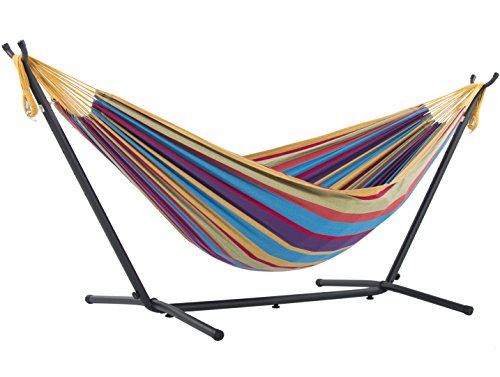 This product was mentioned in 39 comments, with an average of 2.10 upvotes

Also, as a teacher, I GUARANTEE the thing he will appreciate most is a letter from you, his students. Did you do a production of a play that was particularly significant, or study a playwright that he helped you fall in love with? Buy a copy of that play, and have each of you sign/write a message on the book covers/pages of the play. He will always remember you, and the time you guys all spent together.

I am almost the exact size as you, I'm a little taller. I use a Warbonnet Blackbird XLC with the standard suspension. Being as tall as you are 11 foot is a must for a comfortable night's sleep. When camping there would be no room for second person in the Blackbird.

While hanging out in the back yard I have a Vivere hammock hooked to tree and metal clothes line post. My wife and I lay in it every nice day with no problems. Here's a link to Amazon and it includes a stand. [link]

I would discourage you from using 4x4s. Before I got my clothes line post I tried to use a 4x4 and it snapped off at the ground and hit me in the head. It hurt quite a bit and I felt like an asshole.

Mr. smells got me this last year and this, along with a different gift, has earned him the title of Best Gift Giver. I don’t love the look of a standing hammock, but it’s so comfy and cozy and super easy to put together and take apart for winter. It’s the best. The color he got was out of stock for a bit, and I think a few may be now, but there are a ton of color options.

Depending on the style of hammock, that’s not a risk. The two times I’ve done it were in something like this-

Really hard to fall out of! If you’re thinking about the style where there are bars at each end holding the cloth flat, that could be…interesting.

That makes a lot of sense. For me, the game changer was realizing that the cocoon style ones are much easier to get in and out of, and much more comfortable as well. Specifically, I got this one because of the first review, which is from a 450 pound lady who was kind enough to post multiple pics of her and her similarly large friends enjoying it.

But your worries and concerns are totally valid as well, I just wanted to suggest this as a possible option in case you’d only ever been on a rigid style hammock before.

I have this freestanding hammock stand which is amazing and has held up through 3yrs of being outside year-round as well as 5 camping festivals!

I've had to replace the hammock itself due to weather damage but the frame is good as new.

I slept on this for quite some time, and I would 100% go back to it as a bed replacement. The only downside is it can get a bit chilly in winter (was fine with a sleeping bag, though I ended up going back to a bed because I love using heated mattress cover). If you adjust the angle you sleep at, you can flatten it until it feels comfortable.

this is the one I bought I'm pretty sure. very comfy happy hammocking

[I have been sleeping on the vivere hammock and stand bought off amazon for 80 bucks since 2012. Luckily my wife is understanding of how uncomfortable the bed is for me so I still sleep in it, mostly in the summer though.

I have one of these. It holds up to 450 pounds, apparently. I don’t think you can buy just the stand without the hammock, though.

Also, that one so many people link to, the Vivere 9’ Brazilian with a “space saving stand” actually says the total length is 130”, which is almost 11 feet. So, maybe that is the 11 footer? Here’s the link: [link]

I bought this five years ago. I've slept in it every night since then, including taking it camping. It hasn't stretched in any way that I've noticed.

> Those patio stands are really made with spreader-bar hammocks in mind, which are generally hung more taut than gathered-end hammocks.

I disagree. As you can see, this Vivere hammock features the exact same stand, and I've slept in one of those for almost two years.

I think you would have a tough time finding a material that is strong enough, cheap enough to beat this price point:

Sometime people screw an i-hook into a post then hang the hammock from that assuming you have a stable post/stud that can handle the weight. Otherwise that stand/hammock from amazon is pretty good and you can take it apart. I have one and really like it.

I use a really old floppy pillow.

I'll sleep on my side or on my back.

> I've slept on my back before, and that does wonders for my neck (especially with no pillow at all) but in recent years I will assuredly snore in this position and wake myself up. Maybe I've gained too much weight and I should exercise more.

> I'm thinking of maybe buying two marital bedroom sex swings and hanging them off the ceiling facing each other and just sticking my shoulders through one and my hips through another to simulate weightlessness.

That's..err.. a lot of work for essentially amounts to a hammock you can't move around.

I'm guessing we can link stuff that is not in a normal gifting range? Since you said you'd gift "stuff" to the winners, I'm taking that to mean we can share the expensive shit that you need on your list too, because we all need to dream.

Correct me if I'm wrong, though, and we're supposed to link reasonable stuff.

But if I'm correct, you need this hammock on your list because just look at it. Who DOESN'T need one of those in their life?

It’s a hammock with a steel stand. Like this one.

I think it is this one. Scroll down to see the pics in the reviews. That does not look comfortable.
[link]

I slept indoors on a hammock for three years. Used this to make it [link]

I hung mine with Whoopi slings

I also had a warbonnet black bird for camping and scouting

I went the cheap amazon route and bought https://www.amazon.com/gp/product/B004YJCP7O/ref=ppx_yo_dt_b_search_asin_title?ie=UTF8&amp;psc=1

I've had it for a little over a year and it holds my 6'2" 300lb body very comfortably. Many a summer nap had in the hammock

I've never tried one but there are people with back pain who use a Brazilian hammock as a bed and swear by it.

I love it, but I wouldn’t recommend it if you need something small.

I bought the stand and the hammock together off amazon.

I love it, but I wouldn’t recommend it if you need something small.

I bought the stand and the hammock together off amazon.

Honestly, I would toss the bed and buy a hammock stand + hammock. Something like this, or maybe this stand with any double-width Brazilian style hammock.

I once spent a year sleeping in a hammock and it was honestly the best sleep I've ever had. If you sleep the right way (at an angle: not aligned with the long axis of the hammock, but about 45 degrees off from it), the hammock flattens out beneath you and supports your back perfectly. Plus you're hanging, so the unlevel floor would not matter. It's great.

If ordering online is an option, I have this one and it's great

I'm looking into buying one with a stand ([link]). Can you explain how a hammock (with a stand) would prevent any absorption of vibrations?

I've used this one for quite a while and can recommend it. But any other Brazilian hammock I'd recommend over a parachute one for nightly sleep, they're warmer.

Some free-standing frames aren't much longer than the hammock itself. This one is pretty awesome: [link]

I also have one I bought off Amazon and it is absolutely amazing.

Here it is. I mentioned it in another comment, but I either have the 12' or the 9' frame, and it is quite large for indoors, but it is great.

The hammock is definitely attainable - [link]

I bought one of these a while ago. Not a huge fan of the hammock, but the stand is awesome.

I think it's this one. Just edited my post to include a picture.

I have this Viviere double hammock and I've been sleeping in it every night for the past two years. It's almost an exact copy of the Walmart one you've linked. The link I provided is more expensive because it also includes the 9 foot frame, which is well worth it.

In fact, the only reason I moved back to a traditional bed in December was because it gets cold during the winter and I got an amazing deal on a lofted bed. The previous winter, I just made a sandwich out of a two-person sleeping bag, then slipped myself into the top flap. The three layers of sleeping bag beneath me worked just fine to insulate me from the cold air around me. If you don't have some decent blankets, you will get cold during the winter, because there's cool air all around you. It's absolutely wonderful in the summer, though.

The only problem with sleeping in a hammock is that it's so dang comfy that you won't want to leave.

Also, the standard strings for the Viviere will eventually stretch with use, and if you use it a lot, you'll pop one or two after about a year and a half of constant use. Mind you, my hammock was acting as my bed and the main seat in my room... so whenever I was home, I was usually in my hammock. I've popped four strings so far, and the hammock still works just fine. It's just as stable as it always has been, it's just a little more comfortable now. I did pick up some 550 paracord online and I do intend to restring it with some stronger cord when I eventually need to.

I mentioned the summer just a moment ago. This hammock comes with a duffel bag, and you can pack all of the poles, a standard size pillow, and some twin-sized bedsheets into the bag, no problem. As such, it's my travel bed whenever I go on vacation with my friends. Just unscrew the knobs holding the poles together and the whole thing packs away in under 10 minutes. Chuck it in your trunk with the rest of the baggage and away you go.