What is reddit's opinion of VIVO Black Manual Height Adjustable Stand Up Desk Frame with Hand Crank System | Ergonomic Standing 2 Leg Workstation (DESK-V101M)?
From 3.5 billion comments
As an Amazon Associate I earn from qualifying purchases. The following content includes affiliate links for which I may make a small commission at no extra cost to you should you make a purchase. 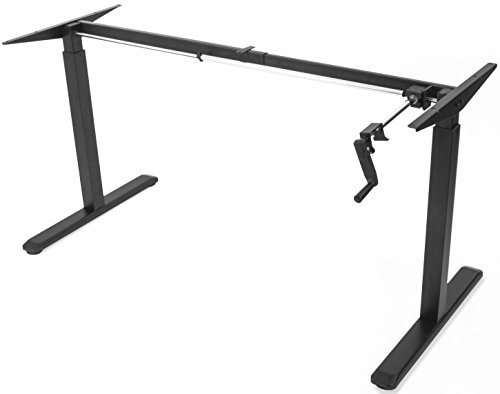 This product was mentioned in 13 comments, with an average of 1.00 upvotes

You'll want to check the weight for everything and how practical it'll be... but for sub $200 the best you can do is manual. 132LB isn't a lot but might work for you.

I'm using a real workbench; just a standard bench-height thing meant for shops and warehouses. It'll hold 3000lbs, which is overkill to hold up two Ubuntu NUCs with dual monitors, but whatever.

I mostly stand, but a cheap "drafting chair" off Amazon will be the right height.

Amazon has a sit-stand desk base with a hand-crank: [link]

For the top, you can use whatever suits you. I like builder-grade butcher-block countertops, but you can go to the local lumber shop and get whatever you like: 2x6's, cedar fence planks, ply, edge-glued panels. Ikea is absolutely a bitch to deal with, but their hardwood countertops are affordable, at least.

Thanks for your response. I had never thought about height adjustable desks but they sounds great. I'll go and do some research now. Thanks!

Have you thought about a height adjustable desk? You can build whatever top you want on one of these and it goes up and down so you can stand or sit [link]

For what it's worth, I bought this awhile ago and absolutely love it. Seems a bit cleaner, and cheaper than adding another thing on top

Thank you so much! I'm trying to decide between that and this crank desk frame allowing me to customize the desk colors and such.

What do you think?

A little late to the party, but since it have little ones, I built an crank adjustable-height table with this thing: [link]. It works great and looks nice, but it's wider than I would like. I wish they made one that was a foot narrower.

If you've already got a table top you could use (or an old door), I'd recommend getting some standing desk legs and just screwing them into it. E.g. [link]

I bought a pair of these and screwed them into an old desk top I had. It works amazing. Very stable. Lots of room. Cheaper than the Wahoo desk and it converts easily to a regular desk for when I'd like that

I built that desk myself. It's basically black stained 2x12's for the top and I attached these crank legs to it.

Oooh I gotcha I gotcha. So the ring is a foot rest yes. Some people don't like them and for big / tall people often the rings are too small for them to actually use them. But I don't mind using it.

I see now what you mean about resting your feet on the floor though. Some people buy footrests, like off of Amazon, or you could do something DIY. Depending on her favorite height you guys could buy like a storage ottoman, or even a little drawer unit and put something soft on top like a folded blanket that also looks nice.

When I'll be sitting for long periods of time I have a sturdy little step stool from Target with a fat memory foam pillow on top that's too thick to sleep on. So my feet rest flat and it's actually very pleasant. Doesn't look terribly put together though.

You could get her a mat thingy as well for when she decides to stand?

My desk is a manual version, not electric, meaning there's a little crank on the side to raise/lower it. It's quite smooth, not difficult to crank, and doesn't make noise. I actually preferred that over electric just in case something broke it would be a mechanical problem you know. I bought mine for about $150 USD? It was on sale. . I think mine was discontinued but I linked a very similar one. All the electric ones are all at least $100 more expensive from what I've seen. I'm not sure how that translates into CAD. So if that price difference isn't an issue I think it would be cool to get an electric, but if you're looking for something more affordable I don't mind my manual one.

I really like the fact that it's adjustable; being able to change from sitting to standing or change the height ratios according to what I want to be doing is exactly what I wanted. But that might be too much complexity also, not everyone wants to fuss with their setup as much as I do. If you think that's something that she'd enjoy customizing and making her own, paired with how much work she does at that desk, maybe that might work for her.

IKEA butcher block on top of this guy.