What is reddit's opinion of Wall Control 30-P-3232GV Galvanized Steel Pegboard Pack?
From 3.5 billion comments
As an Amazon Associate I earn from qualifying purchases. The following content includes affiliate links for which I may make a small commission at no extra cost to you should you make a purchase. 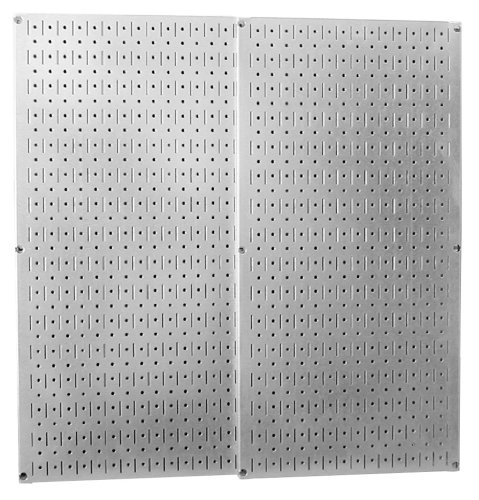 This product was mentioned in 27 comments, with an average of 1.33 upvotes

Amazon link to the one I bought. They come in different colors too if you want to hide the pegboards or make them contrast more. I've been tempted to try and paint mine so my stuff looks like it's floating on the wall.

Armory walls are awesome and this looks off to a great start. We’ve all started there, putting hole after hole after hole in the wall as we reposition items, move them around to fit more, or group them together by movie/show/game.

When you feel ready to take the next step, patch the wall and repaint it and then add peg board. You could do regular pegboard which can also be painted but more importantly you can cut it to match the angle f the stairwell. Another very popular (that I fully believe I started) is to use these metal pegboards. They also come in different colors [link]

The pegboard is Wall Control.

On the wall is a DJI FPV (and controllers), a DJI Mavic Air 2 (and controller), a fight stick, a Raptor X hard drive, an Nvidia GTX USB stick, some headphones, an AMG hat, and some other crap.

I decided that the downstairs would be free of nerdy shit (though I still have my 3D printer down there because I have nowhere else to put it, plus it looks cool), while the upstairs would be my sort of "man/nerd cave". So, I allow myself to be pretty expressive up here!

I love it, it lets me save an immense amount of space. 2 are for tools, one is for over sized tools and gardening whatnots.

I have OLDDDDDD OLDDDD pegboards probably from the time my house was built. So where you'd get them is beyond me. I've never seen any for sale as large as mine are. But I really like these galvanized ones on Amazon,

Available in various sizes, to better cater to your personal setup. Check them out!

I like it pretty well, several colors to choose from. $35.00

$34 per pair on (Amazon)[[link]]. I think /u/CJNerf posted a photo of his Rival wall and said he uses these. I should have bought better pegs though. Think I’ll be returning (these)[[link]]. They’re complete garbage.

WallControl Panels are cheap and look good, and you can get them on Amazon with free shipping

They are really nice. [link]

It is already extruded out so you just mount it directly in the wall studs.

I looked at the wire concept but it wasn’t what I wanted esthetically.

On Amazon from a company called Wall Control: [link]

It was this one from Amazon.

In this case you're not actually posting an affiliate link, but someone looking at the URL can't tell that because websites also use the same markup for internal search engine results or click-throughs from other product pages, so to avoid confusion (and keep URLs shorter and more to the point), you can chop off pretty much anything on the end of a URL starting with the "ref=" bit and still have it take people the same place.

With Amazon specifically, the only parts you actually need to get to whatever product you're linking to should look like this: https://www.amazon.com/Wall-Control-30-P-3232GV-Galvanized-Pegboard/dp/B001J6FSDS

It's a standard pegboard that I spray painted with a Rust-oleum metallic paint (because I had it from an old project lol). Eventually, I want to upgrade it to these galvanized metal board. The accessories are just these and they're alright but nothing ground breaking.

Ok i don't have any affiliate links here is the link :

I had good luck using peg board panels and hanging them on the wall. [link]

Here's the panels on Amazon [link]

Not to rain on the parade, but these are available all day long on amazon for $10 cheaper.