What is reddit's opinion of WILLHI WH1436A Temperature Controller 110V Digital Thermostat Switch Sous Vide Controller NTC 10K Sensor Improved Version?
From 3.5 billion comments
As an Amazon Associate I earn from qualifying purchases. The following content includes affiliate links for which I may make a small commission at no extra cost to you should you make a purchase. 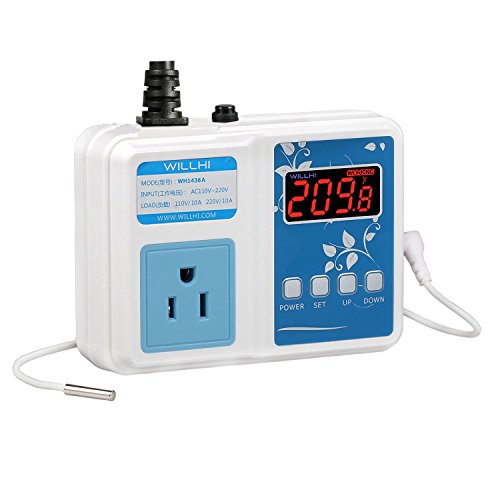 This product was mentioned in 42 comments, with an average of 1.79 upvotes

I saw someone using this on a sub and it seemed to be affordable and effective.

Yeah this is my first try with fungus but we are running 20 shoeboxes, using substrate that’s heavy manure, and also running a spare 150w led 12/12 in the top of the tent (and clear lids). Hoping we got it right and soon I have the all the medicine needed for the summer at minimum 🙏

You can get a nice temperature controller for ~$30 off Amazon - Set your desired temp range, plug space heater into the controller, and wallah! I’m currently using two of these models; one for colonizing, another for fruiting, and they’ve worked great

I noticed my growth really speed up Once I got my temps to A stable 75 to 80°F, I use a small grow tent with one of these hooked to a 500w amazon basics space heater. It was recommended by another user but I had to modify the placement of the temperature shutoff sensor inside the heater. It would shut off every 5 min and not turn back on. But once I moved the sensor it works perfectly.

A different heating solution than a mat is to buy a temperature control something like this and a box fan. You'll then adjust the settings to turn on when it hits 75 and off at 79 fahrenheit for innoculation. They probably make them in celsius for the UK and you'll just have to adjust the settings to 23.9 to 26.7.

I use this method for my closet and the temperature stays within range 24/7. The best part is instead of being limited to a box with a heat pad, you'll instead have a whole closet to work with.

You should be perfectly fine at your current temps, though it will likely take a bit longer. If you have a suitable closet to grow in though, you could get a small space heater and something like this to turn off the heater when the closet reaches a certain temp. Depending on your ambient temperature, it could run anywhere from 30 minutes-3 hours a day, which is definitely safer than just leaving it on all the time. But if you're not comfortable with that, then you'll be just fine as long as the temperature doesn't wildly fluctuate.

[link] this is dope too

I have a couple, the Inkbird on my cheese cave and this chintzy chinesium one on my wineador. Both work just fine, but the Inkbird is definitely superior in build quality. Seeing as the price point isn't too different, I'd recommend the Inkbird.

I had my tupperdore in the fridge for a few months. I had to buy a thermometer with a relay to regulate the temperature inside. Mind you it was a mini fridge. I wasn't using the main refrigerator where I store the Beer/food. You need to store the cigars in the tupperdore with your humidification device in the tupperdore as well. The fridge alone is for temperature control, not humidity.

I never had any issues with my cigars. I know have a wineador to store my sticks in.

I have done it, but not with a programmable one. I bought one of these things ([link]) and plugged my dumb slow cooker into it.

It worked fine and made some great chicken and meat dishes. But I prefer curries so I have not used it that much.

When I get a larger setup with multiple animals I will go with one of the high end systems...at this juncture, its a little overkill. Perhaps [link]

Hi there. Stumbled on your post while looking for sous-vide recipes... Anyway, I do think some people would want a slow cooker with a variable temperature setting. That being said, this turns it into a more complicated machine as you add a very big variable.

I think part of the appeal of a slow cooker is its simplicity, and adding the temperature variable would make the product more complicated and expensive for a function that only a few would actually use.

Also, just adjusting the temp accordingly as you suggest could cause a lot of recipes to have a piece of meat in there for a really long time. In sous-vide cooking it works because it is in a plastic bag and all the meat juices stay in there. If you do not use the plastic bag, the juices will just get dissolved into the cooking liquid and you would end up with a very sad piece of meat (or sauce).

I just bought this little device: [link] to allow me to use the slow cooker the way you want. I think in the future once people really figure out sous-vide, you will see slow cookers with that function though.

Buy one of these, stick the temperature probe down near the bottom of the cooker, and set the temp to be what you want it to be. Fire and forget.

I put a 2.50/lb chuck roast in a gallon bag, put it in the cooker, covered it with water, and cooked it at 135 for two days. It came out incredibly tender, then I seared the outside hard in a pan and had fantastic meals for days!

Any cheap tough meat can go in a slowcooker, and as long as you don't let the cooker get above 140 you can cook it for ages and it will come out moist and tender.

The only catch is that it only works with manual slow cookers. I have another larger slow cooker, but it has an electronic panel on the front and doesn't turn itself back on if the power is interrupted. That makes it worthless for this.

If you're interested in sous-vide but on a limited budget, you should look into one of these guys. It should work with the slow cooker you already have, and you'll get a decent SV starter rig for not very much!

I think you are on the right track. I use this with a cheap submersible aquarium pump and a turkey roaster and it works perfectly. The idea should be the same.

This is very nicely done. I just wanted to mention though for anyone who might think this is beyond their ability, I've had good results with an analog crockpot and the following controller that the crockpot plugs into. It's a smaller chamber and there is no active circulation, but it gets the job done for some pretty awesome steaks. Still if able though, I would make one like this guys.

Sorry, I don't know how to link other than the full URL on mobile. [link]

I got a temperature regulator and a window fan. Now its comfortable in my room in the winter.

Yep, that's the heater! Has been working for half a year now perfectly.

Here's the temperature controller I use with it.

For the tubs, HEREis the exact tub I use. They're way better than shoeboxes because they're taller, and $1 each.

They pair perfectly with the associated IKEA lid which is $0.60, and CLEAR! why doesn't anyone make clear lids for tubs?

I would highly recommend these tubs for 1-2 bags of Uncle Bens. They will be the official recommended tubs when I post my official write-up to this subreddit.

This heater and a temperature regulator is what I use and it works great. If you don't want to spend money try putting them higher up, heat rises. You can use your hand to feel the difference in temp between the air on the floor compared to the air under the ceiling

I ended up going with this one: Willhi ETC

I program a temp controller to keep the heat in the tent between 77F and 80F.

It was pretty easy to set up. Here's the link.

I bought this cheap little heater at Walmart

And this temp controller on Amazon.

Set the controller to turn on at 75, off at 79, facing away from my spawn bags and jars in the top of the closet on my 68 degree room. Only have a curtain keeping the closet closed and it keeps the space in there around 78 degrees no problem

This is the one mentioned in the guide:

The official guide suggests a small ceramic heater and temperature controller (both available from Am*zon: controller and heater). I have installed these. The ceramic heater only cycles when the temperature falls out of the preset zone. Temperature controller is outside of the closet (temperature probe inside), so I always have a visual of the closet temp. I've also seen tek with a reptile mat, using dowels to elevate the tub holding your bags between the mat and the tub. The guide recommends against a heating pad/mat directly against the bag surface. Hope this helps.

If you are willing to throw some money at the problem ($29.99), maybe you could buy this (or something like it) temperature sensor/outlet combo and connect a fan to it:
https://www.amazon.com/WILLHI-WH1436A-Temperature-Controller-Thermostat/dp/B00V4TJR00

I've not used this product, and don't know how well it works though. And of course this brings in all other issues of mounting, noise, what sort of fan to get, etc. etc.
Of course, the first test would be to grab a fan and see if it is able to keep the heat down by itself.

With enough insulation you should be fine, assuming heat won't ever be a problem. Alternatively you can grab one of these and a heater:
[link]

I made a diy sous vide with a crock pot plugged into one of these:

Works great for me.

I'm using this and this in a turkey roaster. Unless you really need the WiFi component, that controller seems a little high.

FWIW, I purchased this one:

I am using this thermostatic controller which is working well for me on my wineador. I have it come on at 69F and off at 65F.

One of these, one of these, and one of these. Don't have any pictures, but its a pretty simple set up. You set the temp you want it at, set the window to .1 or .2 degrees. Don't plug the heater into the controller's outlet unless its underwater, otherwise you blow the fuse. Probably a good idea to start with hot tap water and add some boiling water from the kettle. The heater will keep the water up to temp, no problem, but it can take a while to raise the temp from room temp. I always make sure nothing is going to touch the heater in the water. I'm not sure, but it could probably melt a bag. I have a length of high-themp CPVC pipe that I put over the pot or cambro, and use binder clips to suspend the heater and sensor.

This one is even cheaper. There's plenty of good reviews from people using it for sous-vide.

I bought this controller from Amazon for $27. No wiring required, and it's been working great for the last two weeks.