What is reddit's opinion of World Confections Candy Cigarettes, Pack of 24?
From 3.5 billion comments
As an Amazon Associate I earn from qualifying purchases. The following content includes affiliate links for which I may make a small commission at no extra cost to you should you make a purchase. 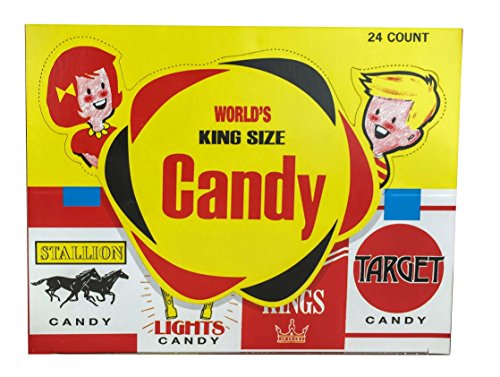 This product was mentioned in 20 comments, with an average of 4.65 upvotes

Kind of surprised they're on amazon. They've got the bubblegum kind too, lol.

Candy cigarettes are now just called "candy" because of the negative connotation with the adult vice. They are still exactly the same, including packaging, contents and overall appearance, but just don't have the word "cigarettes" on the boxes.

You mean these? Just Google "Candy Cigarettes". I always hated these things, tasted like chalk to me. I preferred the chocolate or bubble-gum kind.

And those bubble-gum cigars were cool.

Most places probably just stopped stocking them. It was assumed they somehow fell under the ban of flavored tobacco products several years back, but they weren't.

You can even buy them on Amazon: [link]

Back in the day?

You can still get candy cigarettes.

Now you got me thinking, tho. There is still time to get a buncha of these before Halloween.

just eat these in front of him.

Back in the day as in today?

Got em on Amazon one night!

Oh, and the red dot on the one tip is gone.

Available on Amazon as well as Ebay.

Try amazon smile to donate to a charity of your choice automatically at no cost to you!
https://smile.amazon.com/World-Confections-Candy-Cigarettes-Pack/dp/B000BXSRT2
^^^I'm ^^^a ^^^bot ^^^and ^^^this ^^^action ^^^was ^^^performed ^^^automatically.

Huh, the urban rumor I was fed at some point was they they became illegal to sell. The stores around where I live seemed to stop selling them.

>In America it was reported erroneously in 2010 that the Family Smoking and Prevention Control Act bans candy cigarettes. However, the rule bans any form of added flavoring in tobacco cigarettes other than menthol. It does not regulate the candy industry. Popeye Cigarettes marketed using the Popeye character were sold for a while and had red tips (to look like a lit cigarette) before being renamed candy sticks and being manufactured without the red tip. Most candy cigarettes continue to be manufactured in the United States, with the largest maker of candy cigarettes, World Confections Inc, being based in New Jersey.
>
>https://en.wikipedia.org/wiki/Candy_cigarette

>World Confections Candy Cigarettes
>
>Safety Information
>
>This product is labelled to United States standards and may differ from similar products sold elsewhere in its ingredients, labeling and allergen warnings
>
>https://www.amazon.com/World-Confections-Candy-Cigarettes-Pack/dp/B000BXSRT2

Here are some on Amazon

You still can get candy cigarettes...

Search Amazon if you want some.

I give out these